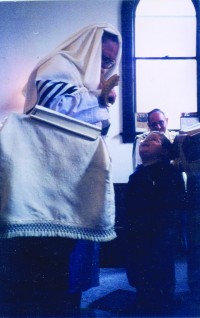 For an ambitious young rabbi or cantor, a congregation that only conducts services twice a year is hardly the place to build a career. But for Allan Goodkind, leading High Holiday services in such a congregation hasn’t been a way of advancing his career—it’s been his way of doing chesed.

In the fall of 1960, seventeen-year-old Goodkind had just graduated from the Chicago Jewish Academy (today Ida Crown Jewish Academy) and was looking to earn some extra money. He received a job via Hebrew Theological College to lead the High Holiday Musaf service in Union, Michigan, and he started to study the tunes. A few weeks before the holiday, the congregation changed its mind and decided to use someone else.

Unfazed by the turn of events, Goodkind looked into an opportunity to lead services for a small congregation in Spring Valley, Illinois. The congregation’s chazzan had recently been lured to Michigan City, Indiana, by a more lucrative offer. Goodkind was offered and accepted the position. Even though he had never blown shofar before, he taught himself how in a matter of weeks and did so flawlessly.

Goodkind says he worried after that first year whether Spring Valley would have him back. They did—for forty-four more years.

Jews first settled in the Illinois Valley Region in the late 1800s. Mostly from Lithuania, they came as peddlers and shopkeepers to serve the mining and farming communities in and around Spring Valley. A town with a population of about 6,000, Spring Valley is located 105 miles southwest of Chicago. Its only shul, Congregation Sha’arei Tzedek, was built around 1909 by the handful of Jews who lived there. While the congregation was small, it boasted a sanctuary with space for about sixty worshipers, which was necessary because Jews from neighboring towns including Mendota, Cherry, Princeton and LaSalle-Peru, would come to the shul for holidays. To compensate for the lack of kosher stores, the shul basement also had large freezers in which kosher meat from Chicago was stored for the entire community. Prior to World War II, the community, which apparently grew somewhat, boasted a kosher butcher and bakery that served the more than fifty families living in the area.

But as is to be expected, most of the young people raised in Spring Valley chose to live in larger Jewish communities after graduating from college because of dating opportunities and other conveniences. The young people seldom returned to Spring Valley, and predictably, the community grew steadily older and smaller.

In the mid-fifties the rabbi left, and the ever-dwindling congregation could not afford to replace him. Weekly Shabbat services ended a decade later since there were simply not enough men to make a minyan. But High Holiday services continued—remarkably—for decades.

Arriving at the Spring Valley congregation for the first time, Goodkind felt energized by davening with the isolated group. Surrounded by Gentiles, Spring Valley’s Jews nevertheless fiercely clung to their Judaism, maintaining a strong Jewish identity amidst the vast spiritual wilderness. “They would drive to Chicago to buy kosher food,” recalls Goodkind. “They would build sukkot. They made sure to let the surrounding Gentiles know when it was Jewish holiday.”

Goodkind, who did not grow up in a religious home, was awed by these sincere, ordinary folks for whom being observant meant sticking out like a sore thumb. Moreover, the role he had unwittingly taken on forced him to aspire to higher standards. “I knew that if I was going to represent them as a ba’al tefillah, I would have to clean up my act,” says Goodkind. “People looked up to me as the chazzan.” Not only that but Goodkind began preparing the sermons too, since “people expect to hear something on Rosh Hashanah and Yom Kippur.” Over time, Goodkind, who would travel in from Skokie, became more observant.

By the nineties only two Jewish families remained in Spring Valley, one tied to a local furniture store and one to a scrap metal business. While the shul building remained locked and empty most of the year, the High Holiday minyanim continued as the local families’ relatives returned twice a year; the tradition of High Holiday services led by Goodkind continued as well. “People who are today grandparents were babies when I first started,” Goodkind reminisces.

Goodkind and his late wife, Sandy, “became part of our family,” says Charlie Steinberg, who would open his home to these special guests each year.

Goodkind knew he was sacrificing having an authentic shul experience during the holiest time of the Jewish year; nevertheless, he believed he did more good in Spring Valley.

According to those who know him, this level of loyalty is not unusual for Goodkind. From the early 1970s until Sandy’s death in 2004, the Goodkinds would visit the Sherwin Manor Nursing Home near their home to say Kiddush for the residents on Friday nights and holidays. They would also conduct the nursing home’s Passover Seder each year.

Rayzel Osina, dietary manager at the nursing home, explained that Goodkind stood out from the many volunteers that visited over the years. “For a volunteer to continue coming on a weekly basis for thirty years is almost unheard of.”

Due to his willingness to be there when needed, Goodkind, who worked as an English teacher at an inner city public high school in Chicago, served as the unofficial rabbi in Spring Valley throughout the year as well. He answered halachic questions over the phone and officiated at at least three funerals over the years. “Whenever there was a funeral, Allan would come,” Steinberg says. “Without my even asking if he could make it, Allan would volunteer to drive all the way.”

On the High Holidays, Goodkind knew he was sacrificing davening in a “real” shul and having an authentic shul experience during the holiest time of the Jewish year; nevertheless, he gave it up willingly. He believed he made a bigger difference and did more good as a twice-a-year rabbi at the two-family congregation in Spring Valley.

In 1990, after his first thirty years of service, the Spring Valley Jewish community presented Goodkind with a plaque inscribed with a quote from Pirkei Avot (5:21): “Whoever brings merit to the community shall not be a cause of sin.”

In 2005, Allan remarried and moved to Pittsburgh, bringing his years of leading Spring Valley services to an abrupt end. Congregation Sha’arei Tzedek is now searching for other ways to continue its High Holiday services, and Goodkind is learning to adjust to davening in an ordinary shul on the High Holy Days. But the unique bond that exists between Goodkind and the little-known minyan in Spring Valley remains strong.

“[Allan] was instrumental in [helping us maintain our] Yiddishkeit,” says Steinberg. “Without Allan making a great effort to come here, our shul doors would not have been kept open.”

Rabbi Levin is the rabbi of Lake Park Synagogue on Milwaukee’s East Side. He has rabbinic ordination from Yeshivat Hamivtar in Efrat, Israel and from the Israeli Chief Rabbinate.