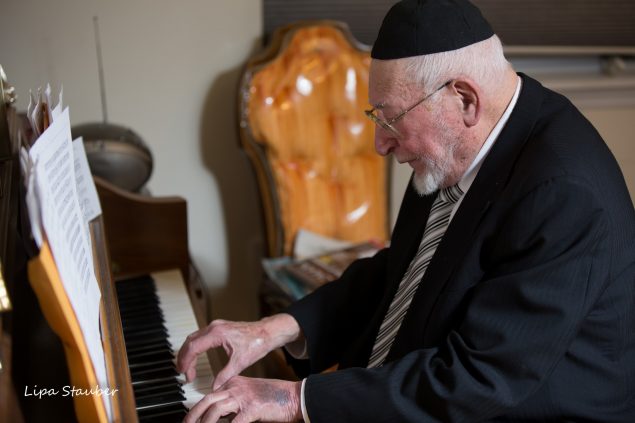 The sad demise of Reb Ben Zion Shenker has left a void that cannot be filled in the world of Jewish spirituality.

I had a close relationship with Ben Zion, who typically insisted that he be referred to as “Ben Zion” and not as Rabbi Shenker, although he had semichah and was a talmid chacham in his own right. I was privileged to daven at the Modzitzer shtiebel with him for many years, and kept up a lifelong friendship with him, calling him once a month for decades. Occasionally, he would send me informal recordings of his melodies and share with me his vast knowledge of the history of Chassidic music.

I cannot confine my words about Ben Zion to his music alone. He unfailingly attached his melodies to appropriate texts, and displayed an uncanny ability to instill in those texts new spiritual significance. He was humble and self-effacing. He enthusiastically shared in the semachos of his friends and family, composing new tunes in honor of numerous weddings. He composed an unforgettable new melody in honor of my own marriage to Chavi, a granddaughter of the second Modzitzer rebbe, Rabbi Shaul Taub, zt”l, to whom he was especially attached.

Ben Zion was the pioneer par excellence of the revival and proliferation of Chassidic music. It was sixty years ago that the first phonograph record of Chassidic melodies was released at his initiative, and it was then that the Jewish world was introduced to his mellifluous and inspiring voice. He thus began the process of preserving the repertoire of the music of the Modzitzer Chassidic dynasty, a national treasure that would have been lost were it not for Ben Zion.

Ben Zion composed hundreds of his own niggunim, including such universally popular songs as his Mizmor L’David, HaMavdil and Eshes Chayil. He released a new CD just weeks before his death. He was nearly ninety-two years old at the time of his passing, yet he composed several new melodies in honor of the most recent Yamim Noraim, and conducted the Neilah service this past Yom Kippur.

His ability to both preserve the music of his predecessors and to create stunning original compositions can be understood in terms of a distinction made by Rav Avraham Yitzchak HaKohen Kook, the revered first chief rabbi of Israel. Rav Kook was once presented with a dispute between the author of the Darkei Teshuvah and the author of responsa known as the Maharsham. Both authors were early twentieth-century posekim of the first rank. How could he decide whose ruling to follow? Rav Kook decided in favor of the Maharsham, explaining that there are two types of geonim, geniuses. One is the gaon me’asef, the genius who collects the opinions of others. The author of Darkei Teshuvah was such a genius, as his works are anthologies of previous sources. Another type of gaon is the gaon yotzer, the creative genius. This description fits the Maharsham, whose responsa bristle with originality. Rav Kook favored the gaon yotzer over the gaon me’asef.

Ben Zion was both a gaon yotzer and a gaon me’asef. As a me’asef he identified, annotated and preserved the vast archive of Modzitzer music going back to the mid-1800s. As a yotzer, he composed numerous original niggunim, some influenced by the Modzitzer repertoire, but many breaking new musical ground.

A model of menschlichkeit and a master musicologist, Ben Zion also earned for himself a place of honor in the history of our people. Just over seventy years ago we emerged from the great trauma of the Holocaust. We lost six million of our brethren, and were left bereft of much of our tradition. We suffered, and to some extent continue to suffer, from what is clinically known as post-traumatic stress disorder (PTSD).

One tool used to overcome PTSD is music. I know from intimate discussions with Ben Zion that he had an exquisite awareness of the role that his music played in healing not only his own personal traumas, but the traumas of our people. As a teenager he somehow intuited that the rebbe, Reb Shaul of Modzitz, carried within him an irreplaceable tradition that desperately needed to be preserved. At that tender age he committed himself to a lifetime of studying, mastering and spreading the musical treasures that would help heal the pain of the survivors of the Holocaust and their progeny.

He knew the date and the circumstances of each melody that he preserved. He could tell his audience that one Chassidic march traced back to the 1870s, another was associated with the historic events of World War I, and a third was the first melody composed when the rebbe he idolized reached the shores of the United States. No one could match his account of the dramatic discovery of the Ani Ma’amin composed by a Modzitzer chassid on the death train to Treblinka.*

His choice of the texts to which he set his music was clearly inspired by his need to help heal the traumas of Jewish souls. Arguably the most famous of his melodies is set to the words of Mizmor L’David, Psalm 23. Can any words serve as a better source of healing than “although I walk through the valley of the shadow of death, I fear no evil for You are with me”? And there is no moment that offers more solace for one’s weekday woes than the Friday night Shabbos meal, nowadays enriched by Ben Zion’s exquisitely comforting melody for Eshes Chayil, a melody he composed for his wife, Mrs. Dina Shenker, a”h.

The ultimate triumph over trauma is joy, and for the Jew there is no greater joy than a wedding. Ben Zion composed well over 100 wedding tunes, invariably in honor of a friend, a family member and his own children and grandchildren. His choice of words for those songs were sometimes predictable, such as his world-famous Yassis Alayich, but often unusual, as when he selected this verse from Tehillim, Psalm 91, for my marriage to Chavi: “Ki malachav yetzaveh lach . . . He will command His angels about you, to guard you in all your ways.”

His ability to infuse liturgical and Biblical texts with profound and diverse meanings was his singular distinction. He favored verses from Tehillim over all other sources. I am quite confident that since King David himself no one else has set the words of the Psalms to as many different melodies as did Ben Zion. It is most fitting that, along with King David, Ben Zion Shenker should be crowned for all eternity with the title Neim Zemiros Yisrael, the “sweet singer of Israel.”

May his memory be a blessing.

* The story is told of a Modiztzer chassid, Reb Azriel Dovid Fastag, who composed and began to sing Ani Ma’amin while in a cattle car to Treblinka. A young Jew managed to escape from the train and eventually brought the Ani Ma’amin melody to the Modiztzer rebbe. Upon hearing the niggun, the rebbe reportedly said, “With this niggun the Jewish people went to the gas chambers, and with this niggun the Jews will march to greet the Mashiach.”