In one of Rav Aharon Lichtenstein’s masterful discussions on the value of general culture for the development of a Torah personality, he reflected on the importance of being able to assess the character and uniqueness of individuals, and especially of gedolim. Rav Aharon cited Rav Soloveitchik who commented on the verse “zeh sefer toledot adam, this is the book of the generations of man” (Bereishit 5:1), that an individual must be studied like a book. To this Rav Aharon added: “All the more so if he is a gadol; if grasping his essence accurately is a fulfillment of, ‘But thine eyes shall see thy teachers.’” We cannot here do justice to Rav Aharon’s truly unique gadlus, but in the memories and reflections that follow, I hope to capture some of his exceptional character.

When I was a student at Yeshiva University, I remember Rav Aharon running through the halls (he was always running) with his mini Shas and two-volume Mishneh Torah balancing atop his Gemara. As rosh kollel, Rav Aharon always opened this mini Shas almost magically to the right page and to the source needed. But in fact, it was not magic; it was a testament to Rav Aharon’s knowledge of every page of Shas, which led his fingers immediately to the line in question. In the Rav’s shiur, whenever a source was needed, Rav Aharon supplied it immediately. But, in keeping with his humility, he once commented to me that there was a special “Al Chet” confession for those who must demonstrate their knowledge of the page number (daf) every time a passage of Gemara is cited: “dibarnu dofi, we have spoken the daf.”

I remember once during a summer shiur of the Rav in Onset, Massachusetts, in 1967, Rav Aharon’s five-year-old son Yitzy coming into the Rav’s shiur, announcing that he was carrying a “Bambam for Zeidy.” This little boy could not yet pronounce Rambam’s name, but the education he received from his parents meant that Rambam was already in his blood. He is now a renowned talmid chacham who has edited volumes of the Rav’s published chiddushim.

Rav Aharon’s gadlus baTorah is well-known, but less celebrated is his gadlus as a father and as a son; his commitment and dedication to his family. Rav Aharon was always learning, but nevertheless managed to spend time with all of his children. When Rav Aharon’s father became blind, Rav Aharon demonstrated legendary care. Rav Aharon dedicated an article of his in Hebrew to “the descendants of Yitzchak and Yaakov, the disciples of Rav Sheshet and Rav Yosef, who accept their lot with love and serve their Creator in silent anticipation,” the last phrase of which he later confessed was an allusion to the concluding line of Milton’s “On His Blindness”: “They also serve who only stand and wait.”

This was precisely the lesson that Rav Aharon sought to teach–that the world we live in requires nuance, and navigating it requires an appreciation for complexity.

Even when Rav Aharon was living in the United States, he always spoke to his children in Hebrew, while his wife, Dr. Tovah Lichtenstein, spoke to them in English. This provided the children with an early example of the dialectical method. But this also may have been because, as his son Rav Mosheh asserted, Rav Aharon already dreamed of teaching Torah in Israel from the time of his childhood in France. It was no secret that the Rav was opposed to Rav Aharon and his wife, the Rav’s daughter, making aliyah with their children, both because the Rav did not want his family to be so distant and also because he wanted Rav Aharon to be his successor in the United States. But Rav Aharon and his wife made the difficult but principled decision to make aliyah because they believed that outside of Israel, the full expression of Jewish religious life was lacking. As Rav Aharon put it in an article about the relationship between religion and state: “No doubt, in its essence religion is ultimately, in Plotinus’ phrase, ‘the flight of the alone to the Alone.’ Nevertheless, for the Jew, the purpose and direction of his religious existence is defined by his membership in Knesset Yisrael.” Outside of Israel, one remains an individual Jew. Only in Israel does one truly experience Judaism not merely as an individual, but as a member of the Jewish nation. As Rav Aharon admonished in a different context, “We must not only live in history, but live historically.” Ultimately, the Rav reconciled with their decision, and I remember during one of Israel’s wars the Rav remarking with pride that his grandson was serving as an IDF soldier in Lebanon.

For Rav Aharon, ethical considerations were always paramount. According to Rav Aharon, being a Jew does not mean forgoing the universal dimension of ethics; on the contrary, “the sharpening and heightening of the universal spiritual reality is part of what the sanctity of Israel is all about.” This ethical awareness accompanied him in his every action. Rav Aharon’s approach was always principled but wonderfully reasonable. He had high standards, especially for those he loved most. As such, he was very critical of Israel’s response to the events of Sabra and Shatila. And it was his position as a citadel of rectitude and integrity which gave Rav Aharon the credibility to stand for “the better angels of our nature” in the aftermath of the tragic assassination of Yitzhak Rabin. 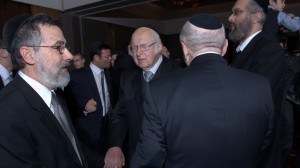 Perhaps Rav Aharon’s trademark intellectual trait was his recognition of the complexity and multidimensional character of many issues, and that the quest for truth requires that all sides be thoroughly explored. This exploration was the defining feature of his Talmudic shiurim, where he examined every sugya for all of its potential theoretical underpinnings–following to the maximum the Rav’s frequent expression during his shiur that “my job is to exhaust all logical possibilities.” This intellectual complexity was also the basis for his appreciation of great literature, where he found the complexity of the human condition depicted, and of his worldview as a whole. Dr. Tovah Lichtenstein recounted that once on Purim, an inebriated student complained about the impossibility of ever receiving a straight answer from Rav Aharon; for every question, the answer always consisted of “on the one hand” and “on the other hand,” all options carefully weighed for their advantages and disadvantages. But this was precisely the lesson that Rav Aharon sought to teach–that the world we live in requires nuance, and navigating it requires an appreciation for complexity.

Underlying this intellectual position was Rav Aharon’s profound humility. The gemara (Berachot 28b) recounts that when Rabban Yochanan ben Zakkai was dying, his disciples went in to visit him, and found him weeping. When his disciples asked him why he was weeping, he replied, “When there are two paths before me, one leading to Gan Eden and the other to Gehinnom, and I do not know by which I shall be taken, shall I not weep?” The Rav explained this gemara by referring to another episode in the life of Rabbi Yochanan ben Zakkai. As recounted elsewhere in the gemara (Gittin 56b), Rabbi Yochanan ben Zakkai met with Vespasian, the Roman emperor, and was granted any request. Rabbi Yochanan ben Zakkai asked to save Yavneh and its sages, but he did not ask to save Jerusalem. The two paths that he saw before him, the Rav explained, reflected his self-doubt; he was forever conflicted whether his decision to ask for Yavneh over Jerusalem was the right one. He did not ask for Jerusalem because he figured such an outlandish request would be rejected out of hand and they would then be left with nothing. His position of leadership did not lead him to a pat self-assurance,
but rather to constant questioning; his humility led him to see complexity. Rav Aharon’s appreciation of complexity was likewise born
of humility.

Rav Aharon’s intellectual complexity was rooted in religious commitment. As he commented, we must “appreciate modernity, but only through the prism of eternity.” He gave no countenance to disciplines, such as Biblical criticism, which undermine our tradition, and in the case of contradiction between Torah and general culture, he did not hesitate about where our loyalties must lie. He was a staunch advocate of the centrality of Talmud study lishmah, despite its difficulty. Similarly, Rav Aharon believed in the centrality of ethics that go beyond the letter of halachah. But in a case where our moral intuition opposes halachah, Rav Aharon wrote, “The answer is perhaps practically difficult, but surely it is conceptually clear and unequivocal . . . God’s command takes precedence, in every respect, over our moral sensibility and our conscientious objections.” Rav Aharon’s persona was multi-faceted, but not fragmented; his entire being was subsumed under his identity as an eved Hashem.

Finally, I think it was Rav Aharon’s quality of wholeness that allowed him to see the best in others. Rav Aharon saw the potential in every individual. We began with the Rav’s observation that man must be studied like a book. The gemara (Shabbat 105b) says that one who is present at the time of death of another Jew must tear his clothing, because it is as if he has witnessed the burning of a sefer Torah. Rashi explains that every Jew, even one who appears to be empty, nevertheless contains Torah and mitzvot within. Rav Aharon saw the sefer Torah hidden within each individual, and through his genius, kindness and humility, he restored in countless people their connection to the Book of Books.

5 1 vote
Article Rating
This article was featured in the Fall 2015 issue of Jewish Action.