Confronted by the phalanx of questions included in this symposium, I find myself responding instinctively with two reservations. The first is the obvious rejoinder that such a range can hardly receive adequate treatment in the space allotted to each participant. The second, in a more personal vein, is recoil from futuristic projections, in general, and from the implication (here, admittedly quite muted) that they should intimidate us into falling in step with the presumed inevitable. On second thought, however, I note, with respect to the first point, that the editors have mercifully only asked for answers to one or more questions; and, as to the second, I shall take the liberty of assuming that, in accordance with my vocation and predilection both, I have the license to seek to prescribe rather than to predict. 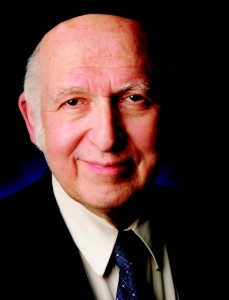 While the issues raised cut a broad swath, as might have been anticipated, a priori, with respect to the examination of any religious community, they may be condensed into two primary categories: areas, which, substantively, relate to the internal structure, character and direction of American Orthodoxy itself, and those which concern its interaction with other segments of society, Jewish or general. This, in turn, invites two further, and somewhat related, questions: 1) Upon which area ought we focus, collectively? 2) How, and to what extent, do these areas intersect, and how does one inform the other and impinge upon it?

Given my spiritual perspective, on the one hand, and my reading of the contemporary scene, on the other, I have little doubt but that American Orthodoxy — especially, albeit not exclusively, its more modern wing — should best concentrate upon molding and holding its own character and constituency. And this, across a broad spectrum, and with respect to a range of issues. Thus, at one pole, the problem of defections — whether out of philosophic skepticism, egocentric libertinism or societal disaffection — certainly needs to be acknowledged and addressed. Assuredly, the figures are nowhere nearly as calamitous as those of pre-World War II Europe, but they are nevertheless quite worrisome. Moreover, the current initial base is considerably smaller and the defections often graver. At stake, in some cases, is not just the move from the cheder to the Bund, but the rejection of Jewish identity to the point that “Hashem bagadu ki vanim zarim yaladu;” [“They betrayed God for they gave birth to alien children.”] and, at that level of apostasy, even isolated instances should concern us.

At the other extreme, the quest for vigorous and sensitive spiritual leadership should retain high priority. The current dearth of first-rank gedolim is generally acknowledged and bemoaned. One can think of no indigenous American gadol certain to be remembered with wistful awe a century hence; of no current chibbur [work] assured of a place in a standard beit midrash library in the next generation; of no giant majestically bestriding the contemporary scene and securely moving American Orthodoxy into the future. At that plane, however, I am not certain that much can be said or done. The social and/or educational infrastructure out of which emerged the Chazon Ish, Rav Shlomo Zalman Auerbach or Rav Yosef Ber Soloveitchik, zt”l, is, at least for the foreseeable future, probably beyond replication. Yet, much can and should be done to stimulate Torah leadership at a secondary plane. The key is obviously educational — identifying and inspiring talent, channeling energies and resources, promoting institutions and providing opportunity. Above all, ours is the task of infusing and idealizing the blend of piety, knowledge, imagination, sensitivity and commitment so critical for the persona of a talmid chacham who can also serve as a mentor and a leader; and we are challenged to strive for a proper balance, in his development and personality, between insular concentration and relatedness to his ambient society. Over the past generation, much has been done in this direction — far more than even optimists had previously envisioned. Yet, in the perennial quest for replenishing leadership, much lost ground remains to be recovered.

The problem of defections…certainly needs to be acknowledged and addressed.

In the interim, American Orthodoxy as a whole — each “camp” with its own specific problems and priorities — needs to strengthen and deepen its moral and religious base. The form and direction to be taken may very well vary. Some, for instance, ought to be encouraged to intensify passion, others to inhibit it. Two general comments may be in order, however. First, one cannot escape the impression that American Orthodoxy is now excessively politicized, its attention often riveted upon power and confrontation, be it l’sheim Shamayim, and hence somewhat diverted from matters of the spirit. Secondly, this community has become increasingly engrossed with what is done — and, from a halachic perspective, this is of course crucial — to the neglect of how or why it is, or should be, done; and this imbalance requires redress. Hopefully, as Orthodoxy becomes more confidently secure, the urge to concentrate upon defining externals, so characteristic of an embattled community whose very survival is under siege, may diminish, and more spiritual energy can be directed to modality and motivation. As l’avdo [service to God] becomes a more prevalent reality, we should be able to focus more upon what, in the wake of the Ramban, the best of mitnagdut and Chassidut both, has regarded as the epitome of halachic living — bechol levavchem [with all your heart].

This spiritual emphasis must obviously include a powerful moral component. Woe unto us if dishonesty of anshei shelomeinu [our own people] be regarded primarily as a potential catalyst of Chillul Hashem. It is, of course, that, but much more. Chicanery is a tragedy of spiritual rot which has, at times, infested and infected some individuals and institutions in our community, and has thus traduced if not travestied the commitment for whose sake corners were ostensibly cut; and this should be painfully acknowledged.

Greater unity, likewise, should be defined as a spiritual desideratum. From a certain point of view, this is a preeminently political issue, as it obviously impacts upon the relation of Orthodoxy to other groups. While this aspect cannot be denied — clearly, a community consumed by internecine strife is less poised to defend its turf and promote its agenda than a united front — the quest for greater harmony is fundamentally spiritual, and its absence exacts a moral and religious toll from all our “wings.” Quite apart from the positive search for ahavat — and achavat — Yisrael as a mitzvah and a value, and quite apart from the simply human worth of empathetic comity, there is so much to be gained, objectively, from reaching out instead of lashing out. Mutual fructification can expand horizons and sharpen insights, induce sensitivity and deepen commitment. Expressed negatively, the prevalence of either machloket [conflict] or mutual benign neglect poses the threat that sectarian factionalism — and concomitant recrimination and condescension — may set the shrill tone for our communal climate. In that case, all sectors of the Torah world would be adversely affected — and this, I repeat, not just politically or economically, but spiritually.

Of course, we all have — and should have — our Rubicons; and I am no exception. But how often and where we draw the line in the sand; with what degree of verve we enter the lists; what are our priorities and emphases, and do we at least have the urge to walk the extra mile — these questions can affect our personal and communal stance significantly. As to projection concerning the prospect for greater polarization or unity, on the whole — I hope this is not just a wish as father to the thought — I am sanguine. I believe that reciprocal denigration has peaked and that the sense of a chasm between mainstream elements in respective factions is receding, so that a greater sense of a continuous spectrum is emerging; and that while we may see greater disaffection and splintering at the fringes, the overall climate will be less militant and more congenial. Responsibility and self-interest both, properly conceived, dictate that we strive, collectively, to restrain confrontation and triumphalism, while developing initiatives which, within difference, will encourage not only cooperation but genuine community.

Inner spiritual growth, through more intensive, rigorous and passionate engagement with Torah, mitzvot and the Ribbono Shel Olam, is the unum necessarium per se, at both the personal and the communal plane. It is also the key to fruitful interaction with general culture and possible contribution toward tikkun haolam. That culture is, in one respect, the object of prospective tikkun, moral and religious. In another, it may be, defined by Arnold as “the best that has been thought and said in the world,” an agent of tikkun. As such, it serves the Jew dually. It can enhance his or her own spiritual growth; and it can stimulate and enable him or her, in the spirit of l’avdah u’l’shamrah, to sustain and develop the world around them, either through material yishuvo shel olam [societal stability], what Bacon denominated, “enlarging the bounds of human empire,” or by humanizing its values and mores.

This concern with tikkun olam is itself an element of spiritual growth, inasmuch as it is grounded in the transcendence of egocentrism. Nevertheless, two caveats should be noted. First, at the level of implementation, personal or communal, it needs to be weighed against other priorities. We cannot do everything concurrently, and, even as we internalize concern about the broader world, our primary responsibility, for the foreseeable future, is certainly to our own. Secondly, the ability to imbibe from general culture and to impact upon it, while maintaining proper Torah values and perspective is, again, very much a function of one’s own spiritual state. Hence, in surveying the current scene, I find need for considerable improvement. Much of the Chareidi community cares little, apart from considerations of parnassah [livelihood], about yishuvo shel olam, not quite regarding the world, in Augustine’s terms, as massa perditionis, but not overly concerned about its destiny, either; and it has almost no inclination for understanding or appreciating its chochmah. Many modernists or centrists, on the other hand, do not manifest the religious resolve needed to produce individuals with the scope and intensity which are the hallmark of bnei Torah — individuals for whom dvar Hashem is not simply a set of directives defining the parameters of existence but a consuming passion at its center.

If time and space permitted, much more could be said about the issues discussed or others omitted. Given the constraints, however, I shall rather content myself with a single concluding observation. The symposium suggests that the future of American Orthodoxy can be viewed with “triumph and trepidation.” As we look ahead, these twin senses, properly conceived and realized, are certainly in order. Looking before and after, we have considerable cause for both gratification and concern. Yet, if our resolve as Orthodox Jews is to be meaningful, we must also be informed and animated by much else. Between celebration and anxiety lie responsibility, determination, commitment and, above all, faith. The conclusion of the Gemara in Makkot 24a is equally apt for the individual and for the community: “ba Chabakkuk vehe’emidan al achat, she’ne’emar vetzaddik be’emunato yichyeh; Chabakkuk came and grounded them (i.e. Torah and mitzvot) upon one, as it is stated, ‘And the tzaddik shall live by his faith.’”

This is excerpted from the fall 1998 symposium in Jewish Action on the future of American Orthodoxy.