The Land of Israel is a “lovely, good and expansive land” (Birkat Hamazon). The new observation deck, Mitzpor HaElef in Neve Daniel, Gush Etzion, is one of the places in Israel where those words resonate the loudest. While Israel is smaller than New Jersey, not to mention forty-three other states in the US, on a clear day, from this amazing viewpoint, you get a sense that the country stretches almost endlessly in every direction.

At an elevation of more than 3,000 feet above sea level, the yishuv of Neve Daniel, just fifteen minutes south of Jerusalem on Road #60, is the highest elevation of the settlement bloc known as Gush Etzion. Recently, the Jewish National Fund, in conjunction with the Gush Etzion Regional Council and the yishuv of Neve Daniel, constructed an observation tower (“mitzpor” is derived from the word tzipor, bird) at the highest point in the yishuv–a spot that is 996 meters (3,267 feet) above sea level. It is dedicated to the memory of Sam and Frieda Makovsky, z”l, of Pueblo, Colorado, twenty of whose descendants now live in Israel. When standing on the deck, you are more than 1,000 meters above sea level (elef is 1,000 in Hebrew, thus the name “Mitzpor HaElef”). On a clear day, the view in every direction is spectacular!

Let’s start by looking east. The hills in the distance are in Jordan, on the other side of the Jordan River, just fourteen miles away. Looking in this direction, the Bible literally comes alive. The mountains are the harei Moav–the hills of Moav. It was there that Moses stood in his final days, addressing the Jewish people prior to their entry into the Land of Israel. It was there that God said to Moses, looking across the river toward this exact spot we are discussing–Mitzpor HaElef, “This is the land which I swore to Avraham, to Yitzchak and to Yaakov, saying, ‘I will give it to your offspring.’ I have let you see it with your own eyes, but you shall not cross over to there” (Deuteronomy 34:4-5). Continues the Tanach, “So Moses died there . . . in the land of Moav.”

Generations later, Naomi and Elimelech, residents of Beit Lechem at the base of this hill, moved to the plains of Moav to evade the regional famine and it was there that their son Machlon married Ruth the Moabitess (Ruth, chap. 1). Ruth subsequently returned with Naomi to the fields of Beit Lechem and to her destiny as the great-grandmother of King David. 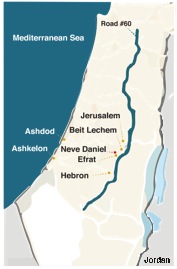 When looking directly ahead, one sees the modern Israeli city of Efrat, home to over 10,000 residents. Many will, of course, recall that Efrat and Beit Lechem are frequently connected in the Biblical narrative. “Rachel died and was buried on the road to Efrat, which is Beit Lechem” (Genesis 35:19) and “May you prosper in Efrat and build a name in Beit Lechem” (Ruth, 4:11), to quote just two textual references.

Another prominent landmark is the volcano-shaped hill; this is Herodium, a luxurious and magnificent fortress built by Herod. During the Great Revolt against Rome, seventy years after Herod’s death, the site was taken over by Jewish rebels. (See my article on Herodium in the summer 2010 issue available at www.ou.org/jewish_action.)

The road directly below Mitzpor HaElef runs north/south from Jerusalem to Hebron and eventually to Beer Sheva. The hills to the south are the Hebron hills, and the city where the Avot and Imahot are buried is clearly visible on the horizon. The road is known as Derech Ha’Avot, Path of the Patriarchs, because it was along this very path that Avraham and Sarah traveled when they first entered the Land of Israel. Avraham and Yitzchak walked the path, which is today a main road, on their way to the Akeidah; Yaakov fled along this same road many years later, escaping the wrath of his brother, Eisav, and returned on this same road twenty-two years later with his family, the beginning of the twelve shevatim.

Turning west, a totally different scene comes into view as the land drops off dramatically toward sea level along the coast of the Mediterranean. The breathtaking panorama goes from Gaza to the south (left), past the buildings of Ashkelon and Ashdod to the tall buildings of Tel Aviv, to the right. The lower portion was once the land dominated by the Philistines (Gaza, Ashdod and Ashkelon are mentioned in the Bible as Philistine cities), and the area right below is where a young David defeated Goliath, along the seam line through the Ela Valley which separated Judea from Philistine territory 3,000 years ago.

Continuing to circle the compass, we now look north. The nearest homes are in Beit Lechem. Beyond are the buildings of Jerusalem. Although we are not high enough to see the tell-tale gold dome on Har Habayit, there are three towers clearly visible on the horizon. The westernmost is the tower in the center of the Hebrew University campus on Har Hatzofim (Mount Scopus). Moving to the right, the next two towers are on Har Hazeitim, the Mount of Olives. In the valley, blocked from view but just below the ridge of Mount Scopus and the Mount of Olives, lies the Old City. Beyond Jerusalem lie the hills of the Shomron. Signs on the site visually highlight the features of the view in each direction.

View west toward the Mediterranean Sea from the Mitzpor HaElef observation platform in Neve Daniel. The view encompasses some of the homes in Neve Daniel, Beitar, the largest city in Gush Etzion, Tzur Hadassah and Arab villages that dot the Judean Mountains as they descend to the coast. On a clear day, the cities of Ashkelon, Ashdod, Beit Shemesh and the Gaza Strip, as well as the sea, are all visible from this viewpoint. Photo: Yehoshua Halevi

Neve Daniel is located only a few miles south of Jerusalem, just off Road #60, the “Tunnel Road.” Turn south off Rosmarin Street and continue a few minutes beyond the turnoff to Beit Shemesh and Beitar (Road #375). The next possible right-hand turn off Road #60 is the road that ascends the quarter of a mile to the gate of Neve Daniel. Enter the gate, continue straight to the first traffic circle until the second left and a small sign for Mitzpor HaElef. Turn left, follow that street to the next Mitzpor HaElef sign, on the right, and ascend the short paved road to the base of the observation tower.

Neve Daniel was named in commemoration of a convoy to Gush Etzion that was ambushed in March 1948 (Nebi Daniel, a bend in the road several kilometers southwest of Beit Lechem, was the site where the supply convoy was ambushed). The town now has a population of over 2,000 and is growing. According to the Neve Daniel web site (www.nevedaniel.net), “On a visit to Neve Daniel in 2009, former US President Jimmy Carter told his hosts: ‘I have been fortunate this afternoon in learning perspectives that I did not have.’ At a meeting in the garden of Shaul Goldstein, head of the Gush Etzion Regional Council, President Carter said: ‘This particular settlement area is not one that I can envision ever being abandoned or changed over into Palestinian territory. This is part of settlements close to the 1967 line that I think will be here forever.’”

Standing at the Mitzpor HaElef observation tower, you will have numerous photo ops while also gaining a deeper understanding as to why the former US president was so moved upon visiting this extraordinary area.