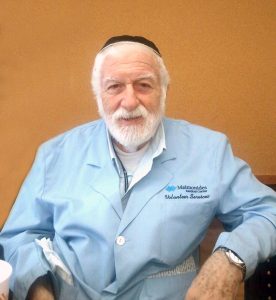 Months ago, my family was thrown into the whirlwind of a medical crisis. Our elderly father had boarded a bus that lurched away from the curb. He lost his balance, fell and broke his hip, which quickly morphed into a fight for his life.

Caring for a seriously ill family member is all consuming. As my father’s condition deteriorated, decisions had to be made about doctors, procedures and discharge choices. My siblings and I had to travel hours to visit. We had to weigh our words while with him, consider all we could do to make him comfortable and hire help to stay with him when we could not—all while managing his home and our own with its attendant problems.

We turned in gratitude to chesed organizations who mitigated the crisis for us. We felt fortunate to have their help, but hearing the comments of “outsiders,” and seeing those good deeds through their eyes, really highlighted for us how exceptionally generous our nation is.

Ordinarily, the phrase, “You people…” has been a cringeworthy preface to some insult. “You people think you’re chosen.” “You people are taking over the neighborhood.” But during the many months of my father’s illness, “you people” acquired positive connotations for us.

A caseworker noted how lucky “you people are” to have medical advocates. She told me that she cannot propose hospital or rehab facilities to families of the ill. She can only hand over a list of options for them to research but families are often overwhelmed by their choices. Our family was guided by medical referral services such as Echo Institute for Health and Chayim Aruchim.

One day, a doctor accused us of prolonging our father’s suffering and pressured us to “pull the plug.”  Her idea of compassion was to end his physical suffering but there was no accounting for spiritual life or for the religious value placed on life itself.

In his weakened state, my father could not express himself, but he was very much alive. When we held his hands or when we sang or played music for him, we could see his furrowed brow visibly relax or his lips move along with the music.

It was that very day, when the doctor berated me, that I listened to a podcast discussing the Alfie Evans case on my drive home. Alfie was the little UK boy whose parents fought to keep him alive. The courts had ruled against feeding, hydrating or oxygenating little Alfie and had refused to grant Alfie’s parents’ permission to travel with their son to Italy for treatment. I realized how the fight for life might become progressively more difficult, as states are currently considering legalizing euthanasia. The jump from “allowing” euthanasia to “imposing” it had already occurred in the UK and it had cost Alfie his life. Having rabbinical support meant all the more to us, and enabled us to remain strong in the face of heartbreak.

A nurse commented, “You people are lucky to have religious guidance.” She pointed out how families often make decisions on their own and then second-guess themselves. If they pull the plug, they may feel they’ve murdered their relative. If they do not, they may feel they’ve prolonged their loved one’s suffering unnecessarily. We were heartbroken to see our father suffer, but we were not burdened with second-guessing the decisions we’ve made with the assistance of rabbanim. We knew our decisions were based on the medical ethics of Torah MiSinai and that every moment of life counts.

One day, when my father had been transferred to a new hospital, I asked a cleaning woman if she knew where the kosher pantry was located. She showed me the way and seemed curious to know who supplied the room. When I explained that it’s funded and stocked by communal charity, she responded, “You people are so lucky to have a community take care of you.” This particular Bikur Cholim room was tiny, but to my amazement it contained everything one would need. I’d drive very early to beat the rush hour and then go into the little closet to daven and drink coffee. At first glance, I did not see a chair and thought I would have to remain standing, but then I spotted a tiny fold-up stool tucked beneath the counter. Seeing the siddurim, snacks, drinks, and other little comforts in that room filled my heart. Knowing that someone I’ll never meet had taken the time to prepare all this made me feel cared for and part of something greater than myself.

My father, who lay fighting for his life, had been a Bikur Cholim volunteer in Maimonides Medical Center for decades. He had helped in the pantry, assisted the ill with laying tefillin, and cheered up patients. There are times we are the givers and times we are the receivers, I thought. We are all part of this great circle.

Despite what the coming months brought in my father’s battle for his life and eventual passing, my family felt embraced by all the help the community gave us during that time—from referral services, medical advocates, rabbanim, chaplains and chesed volunteers to visitors, caretakers, and caring friends and family. We were not on our own through this painful ordeal.

May the memory of Osher Lemel ben Shimon be a blessing.

Rosenfeld is a writer living in New York.