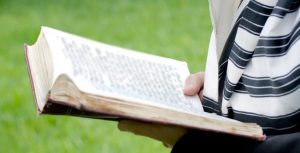 When I started working full-time, I noticed something was different: with only so many hours in a day and being, thank God, in a job involving tasks I typically enjoy, the impulse to constantly race back to my desk became quite strong. Whereas school and part-time roles usually made meal breaks or even just taking a walk pleasant and relatively unhurried respites, the pressures, rush, or just sheer “flow” of full-day commitments robbed me of such leisure.

In some ways, this was a good thing: uninterrupted stretches of time committed to single projects allow for greater feelings of accomplishment and productivity. But in other, personal respects, the toll is much harder. Davening is a big one.

Finishing Shacharit in a hurry to make the bus and, especially in the wintertime, “catching” a nearby Minchah minyan can sometimes be frustrating. Sure, they say most of the words at these minyanim, but the precision with which it all begins and ends, and the hurriedness of so many of the participants can easily supplant the passion and excitement at an opportunity to speak with Hashem. And anyway, is tefillah something we should be catching, like a commuter train or fly ball?

Berachot, too, sometimes get short shrift. To their occasional disadvantage, FFBs (i.e., Frum From Birth-ers) know them so well and are so used to saying them—it often appears bizarre to see someone (Jewish or not) not recite a berachah before eating.

After a while of religiously unsatisfying moments, in coping with and working to break free from cycles of rote, I started to notice an unexpected but regular opportunity that for me personally was still a break, a spiritual “speed bump” along the bustling highways of busy workdays: Asher Yatzar.

“Forget Kol Nidrei”
To a secular ear, the notion of saying a blessing following relieving oneself rings pretty absurd. Prayers are for synagogues, not outside lavatories.

I once heard a story of a shul with a very “modern” membership, where a new rabbi had been appointed. Since he was a bit more scrupulous about shemirat hamitzvot than his predecessor, many of the senior shul members grew skeptical of some of his practices. So one does not have to work hard in imagining their utter surprise upon discovering their new rav closing his eyes and quietly reciting a prayer after using the bathroom. A prayer for that, too? Hilarious! they said to themselves.

Until one day. The president, most distinguished among those amused, had to have . . . a catheter.

When the rabbi came to visit him in the hospital, the older man turned to him and opined: “Forget Kol Nidrei, rabbi! Asher Yatzar. That’s where it’s at!”

While our siddur is magnificent in affording every Kol Nidrei and Asher Yatzar their rightful place throughout each day, week and season, there’s something about that shul president’s stark discovery that may resonate within the rest of us, something worth pondering during those ostensibly mundane, prosaic moments in our daily lives. Something embedded into the text of the berachah, as well.

Yearning to be Grateful
Did you ever wonder why only in Asher Yatzar do we refer to that which is “revealed and known before the throne” of Hashem? Of all the areas of life, need we really remind ourselves that the precariousness of our health is something obvious to the Almighty?

We are hardly in doubt anywhere in the siddur that He is aware of all our needs, material and otherwise. That He knows how fragile our bodies are would likewise seem self-evident.

But while all berachot convey appreciation for God’s munificence, Rav Aharon Kahn, a rosh yeshiva at Yeshiva University, once pointed out that Asher Yatzar in particular goes even further. It touches upon an especially vast ignorance of the depth of His gifts to us.

Science is constantly discovering new layers of our biology and chemistry and their processes. Yet as much as we know about the human body already, still so much of what happens inside of us is a total mystery, transpiring without our awareness of its true precision, power or intricateness. Which, in turn, begs the question: how can we possibly acknowledge that which we cannot really fathom?

In Asher Yatzar, then, we profess that our acknowledgement is hardly what it should be, and moreover, it is actually impossible for it to be otherwise. The text of the berachah signals not only a thankfulness for the wonder that is the human body, but also our yearning to be grateful for even so much of its workings about which we are entirely unaware.

Since the total grandeur of our functioning bodies is known to God alone, in Asher Yatzar we beseech that our gratitude for them be accepted based not on what little we can perceive, but instead on account of His own singular knowledge—that which is “revealed and known” to Him alone—of the breadth and sophistication of what He has given us.

In light of this aspirational plea, it seems fitting that such a tefillah be in our consciousness so routinely, no matter where we are, in obviously very naturally called-for pauses.

Midstream in busy days of quotidian life, when often far from the peaceful pace of a respectable davening and away from the unharried joys of delving into a sefer, there may yet be at least one space in which we can consistently find an “escape” to serve Hashem with genuine feeling and gratitude. However improbable the venue may seem.

Binyamin Ehrenkranz is a member of the Jewish Action Editorial Board. He lives in New York.