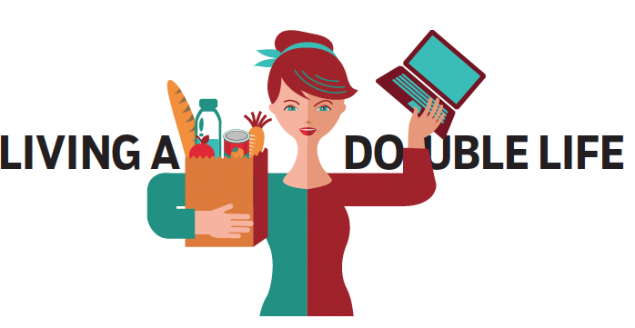 About a year ago, my life changed. Shockingly, my kids weren’t babies anymore, and I went back to work.

Well, that’s not quite accurate. I worked when I was home too—but it was freelance. I was an author/illustrator combined with stay-at-home mom. So my life was something like this: carpool, write, paint, make dinner, write, paint, grocery shop. Repeat.

Needless to say, my sink was often full of dirty dishes.

Now I work full-time. This new reality comes with many adjustments, from changing my wardrobe (no more sneakers and smocks) to grocery shopping only on Sundays. My lifestyle has definitely shifted.

But more than the wardrobe and the shopping is the mental shift: a line has been drawn. In my first life, I raised little kids, and painted on the side. Now, in my second life, I am an editor, and if I am very fortunate, my teenagers generously speak with me and tell me what’s going on in school.

There is still plenty of carpooling. But it feels like two very distinct chapters. I don’t think it’s an exaggeration to say I’ve been blessed with a second life.

Just 150 years ago, people generally lived until age forty-five, with many women dying even younger in childbirth. So that meant one would get married, have kids. . . and that was that. That was life.

Today, lifespans typically reach well beyond forty-five. Men and women both now commonly have true arichat yamim and can reasonably expect to have twenty to thirty years of healthy living past retirement age. That means, in another twenty to thirty years, I (hopefully!) will have another transition to absorb, and will have to decide what to do with a third life.

I don’t think it’s an exaggeration to say I’ve been blessed with a second life.

In the Torah, Miriam also had multiple chapters in her life. She spent the first phase of her life in Egypt, the second as a freed woman who had witnessed redemption. Rabbi Eliyahu Yedid, author of Sheva Haneviot, points out a fascinating detail about her. Miriam is presented with nearly the exact same challenge in both chapters of her life: she has a close relative who separates from his wife. In the first instance, it’s her father, and Rashi tells us that Miriam’s response was to speak up and strongly advise her father to remarry her mother. Result: Moshe is born, and the Jewish people are ultimately freed.

In life two, Miriam is presented with a nearly identical situation. This time, it’s her baby brother who is separating from his wife. Her response? She speak ups. The result? Tzara’at.

What happened? Why did Miriam’s response work the first time and not the second?

Perhaps I can extend Rabbi Yedid’s insight, and suggest that Miriam made the mistake of thinking that both her lives were the same, and both situations were identical. But by definition they were not. One’s tafkid is different in each life, and even though we are the same person and situations can appear to be the same, they are in fact unique, and require different responses and actions.

It was right for me personally to be home in my first life. It is right for me to be working in my second life. For someone else, it might be an entirely different choice. That’s the whole point: we are all different, we all have unique roles and those roles shift over time. The trick, of course, is to be the best “you” in all the lives Hashem gives you.

Ann D. Koffsky is the author/illustrator of more than thirty books for kids, and an editor at Behrman House publishers. Her newest book, Kayla & Kugel, is about a girl and her dog preparing for Shabbat. It’s due out this fall.