As we drove back to Harrisburg, Pennsylvania from the wedding, my wife, Layala, and I felt giddy. On that November afternoon in 2015, we had attended the wedding of Margot and Josh in New York. Weddings are always uplifting, but this one was extra special. The relationship we share with Margot and Josh is unique, even though we met them for the first time at their wedding. Let me explain.

The night before Pesach of 2015, I had completed the search for chametz at my home, and as the rabbi of Kesher Israel Congregation (KI) in Harrisburg, was about to perform bedikat chametz there as well. My father, who was visiting for Pesach, decided to accompany me and we set off to KI, flashlights in hand.

After we inspected the chapel and main sanctuary, my father suggested we check a rarely used coatroom. Upon entering the room, my father pointed his flashlight at a backpack resting on a high shelf and asked me if I knew its owner. The knapsack held a digital camera, a small volume of Mishnayot, and several postcards sent from a “Margot Reinstein” to a “Josh Botwinick.” I left the backpack in the shul office, figuring I’d return it after Pesach. We went home and resumed preparations for the holiday.

When things calmed down after yom tov, I began thinking about reuniting that backpack with its owner. I assumed it belonged to Josh—after all, the postcards were mailed to him at Camp Stone in Sugar Grove, Pennsylvania. Each summer, a large group of campers from that camp stops at KI to daven and enjoy a catered dinner. Josh must have been a counselor who accompanied his campers to KI the previous summer, and accidentally left his backpack behind. However, I only had Margot’s address on the postcard. The easiest way to reunite Josh and his knapsack was to mail it to Margot. I dropped the knapsack—along with an explanatory note—off at the post office, and forgot about it.

Several weeks later, I received a phone call from Margot, who could barely contain her excitement. She thanked me for sending the backpack, and told me there was more to the story. I apologized for not having noticed the knapsack sooner. That’s when Margot told me that she and Josh really appreciated the fact that it took three years for the bag to be found. (Turns out, the backpack had actually been on the shelf that long before I noticed it!)

Margot went on to share the most amazing chain of events. She and Josh had been dating one another while they were college undergraduates. For various reasons, they decided to break up right after the summer Josh had forgotten his backpack at KI. They went on to pursue their education and lost touch with one another. They began dating other people. Then the knapsack arrived at Margot’s home. After reading my note, Margot contacted Josh for the first time in three years, and asked if he wanted to get together so she could return his backpack. Margot told me they met, spent a long time catching up, and had been dating steadily ever since. Both she and Josh agreed that they had not been ready to get back together until then, and that nothing would have developed had Josh’s bag been found and returned to her at an earlier date. Margot told me that they had a strong feeling that a wedding was in their future—and if that should happen, I would definitely receive a berachah under their chuppah.

I listened in amazement, and wished them the clarity I knew they were praying for.

A few months later, Layala and I received a phone call from a just-engaged Margot and Josh who were bubbling with excitement. We were thrilled to wish them “mazal tov.” Of course, we responded in the affirmative when the wedding invitation arrived. And so there I was, a few months later, standing under Josh and Margot’s chuppah reciting the sixth of the sheva berachot. It felt surreal. 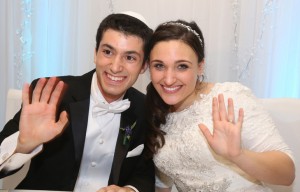 Could God have found a way to reunite Margot and Josh without our involvement? Of course, but we feel so privileged to have acted as His agents. While we’ll never know why God chose us to play a role in this wonderful story, one thought does come to mind. In Pirkei Avot (4:2) our Sages teach us, “Mitzvah goreret mitzvah”—one good deed leads to another. The commentaries explain that God blesses those who engage in good deeds with the ability to engage in even more. This story began with bedikat chametz, continued with hashavat aveidah and ended up with a radiant couple standing together under a chuppah. Who can predict what might result from any mitzvah we choose to perform?

Rabbi Akiva Males served as rabbi of Kesher Israel Congregation in Harrisburg, Pennsylvania from 2007 to 2016. Beginning in the summer of 2016, he will serve as rabbi of the Young Israel of Memphis.

5 1 vote
Article Rating
This article was featured in the Summer 2016 issue of Jewish Action.