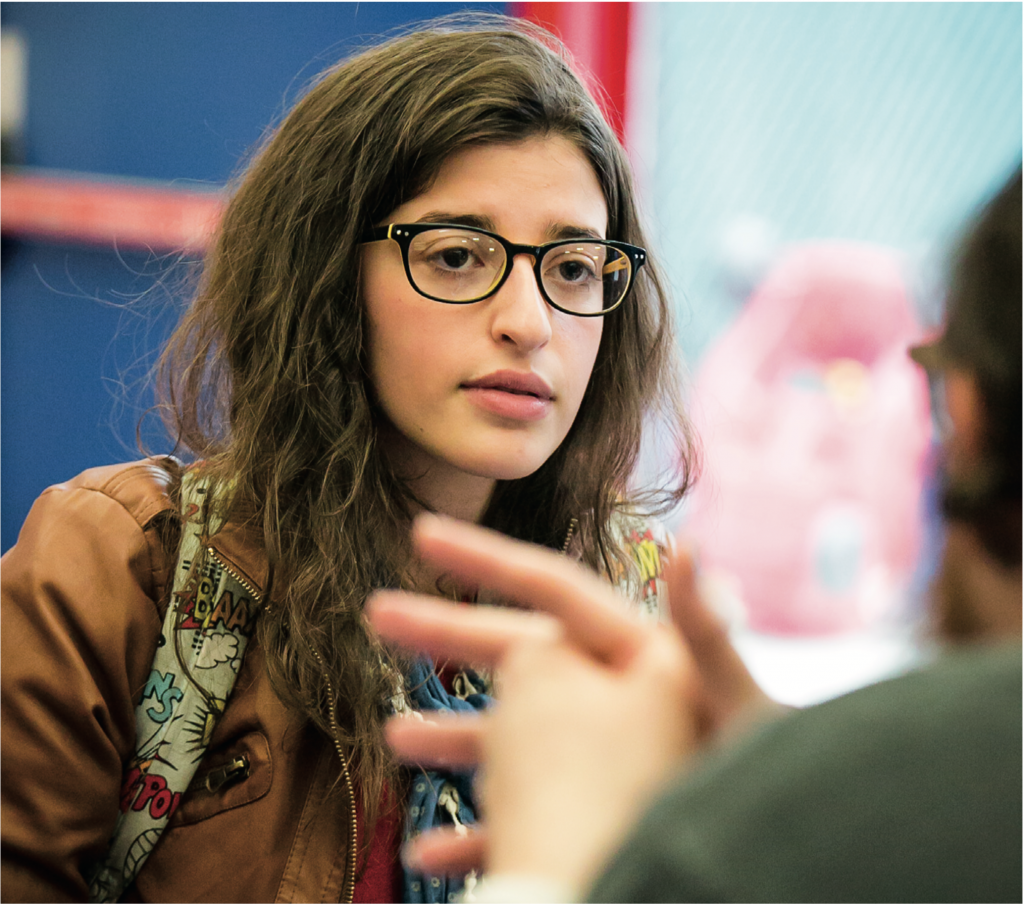 Many young people are lucky to have developed long-term relationships with their OU-JLIC Torah educators while in college. Courtesy of OU-JLIC of Brooklyn College

On a Shabbat afternoon this past summer, I was speaking with a number of teenagers in a sleep-away camp about whether or not one may play basketball on Shabbat. I suggested they each ask their shul rabbi for a final answer. To my surprise, they demurred, as if they could not envision speaking to their community rabbi (who had surely spoken at their bar mitzvahs just a few short years ago) about this or any other question. Clearly, these teens felt they had no rabbi to guide them about this relatively minor halachic issue or potentially even a more major one.

After leaving their parental homes, few Modern Orthodox millennials have a relationship with their new local community rabbi.

For many Modern Orthodox American Jews, the local rabbi serves as a spiritual insurance policy of sorts. Just like one’s physician, the rabbi and shul are there to provide regular annual check-ins and to be called upon, Heaven forbid, in a time of crisis or illness. Building a relationship with one’s rabbi over a lifetime enables one to turn to him for help and support when needed.

In the past, I imagine the answer to the question posed above would have been obvious. Children remained connected to their parents’ community rabbi through their childhood, but gradually transitioned to being guided by their rabbis and mentors in yeshivah or college, and ultimately to their own rabbis when they, as adults, joined a community of their own. Yet today this is no longer the case. After leaving their parental homes, few Modern Orthodox millennials have a relationship with their new local community rabbi. Many, especially singles or marrieds without children, do not make it a priority to formally join a shul. Some live in transient communities and don’t bother forging a connection with the local rabbi; others may attend minyanim that lack a rabbi, or live in urban areas with many congregations and hop from shul to shul without being committed to one place. Still others attend shuls where the congregation may be so large that the rabbi lacks the time to build a relationship with each of his congregants.

Having spent a decade and a half in the rabbinate, I now believe that young adults need to maintain a relationship with the community rabbi of their youth until they forge a connection with the rabbi of their new community. Many young men and women are lucky to have developed long-term relationships with their rebbeim or teachers in yeshivah or seminary, or with their OU-JLIC (Heshe and Harriet Seif Jewish Learning Initiative on Campus) Torah educators while in college, but many others did not. Those who did manage to forge such a connection might find it challenging to continue the relationship after graduation. In contrast, the rabbi of one’s childhood is always accessible. Even when young people live on their own in a different city, they often visit their parents for yamim tovim and other occasions and can easily reconnect with their family rabbi. In addition, since parents often keep their rabbis updated on their children’s lives, the rabbi may be well aware of the specific challenges facing the young adult in question.

It behooves us all to recognize the changing realities of Orthodox life and its effect on the rabbinic role.

Calling upon one’s childhood rabbi for continued support through young adulthood is not only necessary, it is crucial. Ironically, it may be during a young adult’s most challenging years that he lacks the spiritual guidance he so desperately needs.

Keeping the Connection
Indeed, nothing is more gratifying for me than when the former youth of my kehillah—whether they are in college, single or married, living locally or in a distant city—call with halachic she’eilot or hashkafic questions, be it the first time they confront the challenges of Biblical criticism, or the first time they have a work conflict on Shabbat. My wife and I consider such phone calls the fruits of our years of investment in building relationships with the children in our kehillah, from attending school Chanukah parties and bar and bat mitzvah pizza lunches to organizing teen dinners and advising graduates during the college selection process. By involving ourselves in the lives of the children, we hoped to create strong bonds with the young generation in our shul. The investment has been, and continues to be, tremendous, but it pays vital dividends.

What should parents do to ensure that their teen and young adult children are connected to a rabbi?

1. Ask yourself: Is it important to my teen’s development that he or she build a relationship with our community rabbi?If the answer to the question is yes, encourage the relationship in conversations with your child.

For example, if your child asks you a question about the parashah, halachah or any other topic related to Judaism, encourage him to ask the rabbi directly. This will help him to develop the skill of reaching out to a rabbi for help. The fifth-grader who asks the rabbi if he can swim in camp during the Nine Days, or the tenth-grader who asks if she has to repeat Shemoneh Esrei because she forgot to say V’ten tal u’matar, will one day become the college freshman figuring out the kashrut status of his dorm kitchen or the first-year legal associate trying to determine whether her billable hours are ethical through a religious lens.

2. Work with your synagogue to make sure your community rabbi has the opportunity to build deep relationships with teen congregants.

Many rabbis are understandably busy, and the needs of the adults in larger congregations may be so vast that they can take up every waking hour of the rabbi’s day. Yet in order for your rabbi to be a resource for your children as they grow into young adulthood, somehow he will need to find time to build and maintain those relationships. Obviously, shul priorities are often set by lay leadership, and a shift in the rabbi’s focus will require lay leaders to recognize that every hour a rabbi spends in a one-on-one pastoral meeting with a child under the age of eighteen is time spent building a valuable connection that will allow the relationship to continue until adulthood.

3. Partner with your school to involve the community rabbi in your children’s education.

In our less fractured “out-of-town” community, a large percentage of students in our school attend the same half-dozen or so congregations. Because the school recognizes the importance of building connections between teens and their community rabbis, local rabbis are invited regularly to teach classes and electives or to host school Shabbatonim. This may be less effective in a larger city where the students in a graduating class might be congregants in twenty or more different shuls. Nevertheless, even such schools can partner with community rabbis and invite them to visit when possible. Another approach used by one of our teachers is to give every ninth grader an assignment that involves asking the local rabbi a halachic question; in this way, the school used its influence with teens to help build a deeper connection with the local rabbis.

4. If your teen has a difficult time in college or after beginning his first job, encourage him to meet with the rabbi while home during a vacation. Young adults might feel awkward reaching out to a rabbi they haven’t spoken to since their bar or bat mitzvah, and they might not know how to go about it. Parents can make the suggestion and grease the wheels to facilitate a meeting, reassuring their child that the rabbi surely has the time and would be happy to meet with him or her.

5. Resist the movement to start a “teen minyan” run by a “teen minyan coordinator” without the rabbi present. Families oftendaven Minchah and Maariv on Friday and Shabbat afternoons at satellite minyanim and do not attend their main shul. On Shabbat morning, many teens attend a “teen minyan” where the community rabbi is not present. These minyanim are run by an incredible cadre of lay volunteers or educators, and at times by the assistant or intern rabbi of the congregation. Yet if your teen attends such a minyan, he will be spending the entire Shabbat separate from the community rabbi. He or she won’t hear the rabbi speak and won’t get to shake hands with the rabbi at the kiddush, all of which help build a sense of comfort with and connection to the rabbi. The teen minyan coordinator might stay in the position for a year or two and then move on to the next chapter in his life, while the rabbi will hopefully still be there for a long time to come.

The role of a rabbi is constantly evolving with the times. I doubt that serving as a source of religious support to married twenty-seven-year-olds living four states away was in the job description of a communal rabbi decades ago—but today it is. The communal rabbi is a phone call away from wherever a young adult might be living. It behooves us all to recognize the changing realities of Orthodox life and its effect on the rabbinic role.

Rabbi Dr. Yaakov Jaffe is rabbi of the Maimonides Kehillah in Brookline, Massachusetts, and the dean of Judaic studies at Maimonides School in Boston.