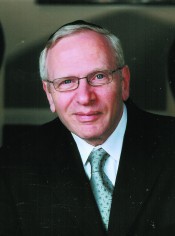 A New Course of Action

In the aftermath of the disengagement from Gush Katif, it became apparent that many OU members and synagogues were concerned that the OU had not taken a stronger position. As I have written in these pages in the past, this reaction encouraged me to try and change how we develop our resolutions, which are the guiding principles behind the policies the Executive Committee and the Board of Directors follow, and which are decided at our Convention every two years.

Under the chairmanship of Aron Raskas, a Resolutions Committee began to involve our synagogues early last year in OU policy-making, enabling them to play a more active, significant role in determining the principles that guide the OU. At the Convention held in Jerusalem this past November, there was a sense of excitement as synagogue representatives proudly wore their badges with “Delegate” ribbons attached. They felt empowered; they were representing their shuls and their communities on issues that are important for the future of the Jewish people.

We purposely scheduled the resolutions session for prime time–on Saturday night. At the session, the conference room was crowded with delegates, alternate delegates, guests and representatives of the media.

What occurred during the next four hours was testimony to the viability of the OU. We are a multi-faceted, multi-dimensional organization. Our member synagogues span the spectrum, from large metropolitan shuls to small rural congregations. This diversity was reflected in the wide range of opinions expressed. The resolutions were debated with civility, but with passion. By the time the session was over, a new course of action, particularly in relation to Israel, had been charted.

Prior to the Convention, the OU had always taken the stand that when it comes to religious and social life in Israel, we have the right to comment publicly. However, we did not openly disagree with the Israeli government. Regarding issues of security, if we had disagreements, we voiced them in private. The new OU policy, decided upon at the Convention, is that our Executive Committee has the right to evaluate each situation as it occurs and, in extraordinary circumstances, to determine the best approach to voice our concerns.

We now have the ability to determine our response on a case-by-case basis. The OU Executive Committee, consisting of thirty-nine members, is a cross-section of Orthodox Jewry in North America. These astute individuals understand their responsibilities as representatives of Klal Yisrael. I can assure you that we will take our responsibilities very seriously and will use the power given to us judiciously as situations evolve.

It is my pledge to our membership (both synagogues and individuals) that before any decisions are made, they will be debated and analyzed with the scrutiny they deserve.

By the time the session was over, a new course of action, particularly in relation to Israel, had been charted.

Many other resolutions were debated at the Convention as well; the most hotly contested ones concern the relationship of Diaspora Jews to Israel. During the course of our four-day Convention, we heard from many speakers about the necessity to help promote aliyah. This is yet another area where change is called for. Our membership has an incredible attachment to Israel; it is time we embarked on a pro-active approach to encourage aliyah and find ways of working with the Jewish Agency, Nefesh B’Nefesh and other organizations dedicated to this cause.

While we have always had an Israel Commission, in addition to the board of the Seymour J. Abrams OU Jerusalem World Center, I have re-activated this commission in the hope of furthering our new aliyah agenda. The revitalized Israel Commission will deal not only with social issues affecting the country, but will help develop creative and exciting programs to promote and encourage aliyah. Stanley Hillelsohn, a member of our Board of Directors, is the new chair, and I know that he and his commission will find innovative ways of working closely with our synagogues on this issue.

A dynamic organization is one that is open to growth and to change. We are open to changing our policies when appropriate, and readjusting our priorities when the need arises. We are especially interested in hearing from our various constituencies about their concerns, their hopes and their ideas. A precedent has been established; from now on hundreds of synagogues and thousands of synagogue delegates will be empowered to play a role in formulating OU policies. We, as well as Klal Yisrael, will benefit from this new process.