The community in which I live, Teaneck, New Jersey, is in many ways typical of Orthodox communities across North America. True, incomes are somewhat above average, but day school tuition and also property taxes are far higher than the norm. What that means is that when my neighbors come up to me with various concerns, they are echoing the same concerns as parents everywhere, and chief among them is how can they ever manage when the cost of educating their children is so enormous.

What I tell my neighbors is that I firmly believe that the only way we will ever approach a solution to the education affordability issue is through a partnership between organizations like the Orthodox Union and each individual community member. Our capacity to help find a solution lies in the contacts we have and those we will need to create at every level of government, as well as in the expertise to be found in the OU Institute for Public Affairs (IPA), guided by its Executive Director Nathan Diament. But as I wrote in my previous message in these pages, the tuition problem will not begin to be solved unless all of us—that is, every one of my neighbors, and you, too—become vocal and active political constituents. 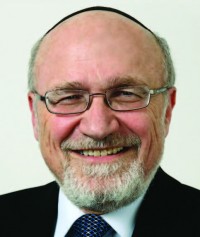 The Orthodox community, through the OU/IPA and others, has very much influenced public policy over the years—even in the school funding realm, although obviously not to the extent that we would wish. But much of what we have accomplished has been done through the work of a small cadre of dedicated professionals and lay leaders playing, in many ways, an “insiders’ game.” In terms of the community at large, voter registration, knowledge of positions on domestic issues and relationships with local politicians have not been prominent on our radar screens.

My message, to my neighbors and to you, is that this must change.

It is clear to me that solutions must be sought in the public policy arena through new and broader strategies.

Casual engagement with public policy by you—the grassroots members of our community—no longer works. We can’t afford to ignore our elected officials for months and then rush to set up a meeting when an issue of concern is on the table. In the past, it seems to me, our day school leaders have engaged in political activity only when government funding threatened to dry up, or some other urgent crisis was at hand, but no serious commitment was undertaken to forge lasting and meaningful political connections. Yet like other communities with specific interests, we—our schools, shuls and our community members—must sustain genuine and ongoing relationships with elected officials if we want to achieve our goals. The key is getting politically organized, and we at the OU are committed to helping Orthodox Jewish communities across the country do just that.

Getting Organized
How do we go about getting politically organized? Our strategy is focused on three major areas: Voting, Education and Legislation.

As I describe these areas, please think about how you can contribute and get engaged.

Vote!
High voter turnout is crucial in order to have politicians recognize our needs and concerns. American Orthodox Jews generally turn out in the 50 percent range for a presidential race and only 20 to 35 percent for most other races! These figures reveal one thing: political apathy. It is this apathy we need to eradicate. Each individual community must commit to increase voter turnout and the OU/IPA will assist in creating voter registration and awareness campaigns. We will help shuls appoint “captains” who will ensure that shul members are registered voters; when elections come up, we will help provide marketing, PR and other support to ensure shul members actually go to the polls and vote.

Educate and Connect
We must create opportunities to educate and engage our elected officials about our needs and concerns. In September, for example, in New Jersey, a state with more than 30,000 Jewish day school students, we held a legislative breakfast, which was attended by over 300 members of our community and featured over twenty-five elected officials. Subsequently, Josh Pruzansky, New Jersey regional director of IPA, took the State Senate majority leader on a tour of a few local yeshivot. Private meetings to meet the candidates and exchange views also followed with a number of officials who attended the breakfast. Such ongoing interactions are crucial in educating our elected officials and establishing strong bonds with them.

Promote Effective Legislation
Once Orthodox communities establish a robust political voice, we will be able to more effectively promote legislation. The OU/IPA works to get legislation passed in a number of ways. IPA professionals craft new legislative initiatives and reach out to diverse coalition partners from other faith groups and ethnic organizations to support our initiatives. For example, we are currently supporting the Opportunity Scholarship Act in New Jersey—a bill that would provide scholarships of up to $8,000 for elementary school students and $11,000 for high school students. As a result of our efforts, pilot districts will include the densely populated Orthodox communities of Elizabeth, Lakewood and Passaic. When specific legislation is being considered, we will keep our communities informed, but it will be up to you to inform the legislators of your interest in its passage.

It’s important to note that there isn’t one formula for success, even in the advocacy arena. We have traveled to and heard from day school and community leaders in Texas, Florida, Pennsylvania, Tennessee, New York, Missouri and Wisconsin about their particular concerns and needs. Legislation for school funding possibilities varies from state to state, thus the strategy must be tailored to the specific needs of each state. Certain schools have the opportunity to receive hundreds of thousands of dollars in homeland security or energy efficiency funding. Others may have had transportation, technology, textbook or special needs funding stripped from them due to budget cuts, and our priority in such cases is to help restore these vitally needed funds.

One community seeks vouchers, another prefers a tax credit, and yet another could benefit from creative fixes on the federal level. In Florida, for example, only those with an income bracket under $60,000 will benefit from the corporate tax credit program currently in existence in that state. In a state like Pennsylvania, the tax credit program benefits a higher income bracket, but the money is very competitive and Jewish day schools aren’t the only ones competing for that pot.

What can we offer the diverse Jewish communities with their distinct needs? We can provide political expertise and leadership training. Our plan is to work with school and synagogue leaders and community activists. Our newly appointed IPA director of political affairs, Maury Litwack, will be coordinating our state-by-state advocacy effort, and will work closely with these leaders to help make a serious assessment of each community’s needs and design a plan of action. He will also help implement these plans where possible.

But the scope of the challenge is great and we cannot do it alone. We need you—whether you are the parent or grandparent of a day school child, a shul president or a community leader—to make a genuine commitment to political activism and engagement. We need you to reach out to us so that we can provide you with political know-how to help effect school reform in your community. We can work together and, with Hashem’s help, put an end to the affordability crisis that threatens our very future.

If you would like to volunteer to act as a coordinator in your community for one of the initiatives I have described, please call our IPA Washington office at 202.513.6484.