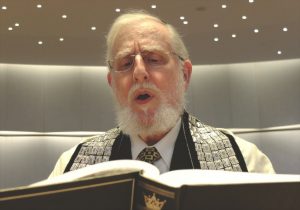 A legendary cantor retires after fifty years of service

For over a decade in the 1970s and 1980s, I had the privilege of sitting in the first seat in the inner circle, immediately to the right of Cantor Sherwood Goffin as he davened at the bimah in the center of the old, round Lincoln Square Synagogue in Manhattan. From this vantage point, I witnessed his kavanah, his mastery of nussach hatefillah, and the unassuming, yet penetrating and powerful way he was able to inspire all those around him.

You could tell how carefully prepared he was for each Shabbat or yom tov service. Our davening is full of nuance, so if a chazzan deviates ever so slightly from the familiar theme, the mood of the shul can be instantly impaired. “The Chaz” would never allow that to happen.

These recollections were echoed by Rabbi Shlomo Riskin, Lincoln Square’s founding rabbi, who for the last three decades has served as chief rabbi of Efrat in Israel, when he spoke some months ago at a tribute to Cantor Goffin for his fifty years of service to the shul. “He has an amazing gift,” was the way Rabbi Riskin put it. “He is always certain to have the right nussach, but with the ability to make everyone ecstatic through his tefillah.” 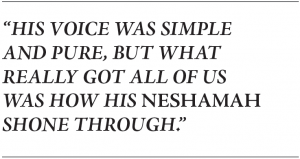 It was Rabbi Riskin who first called him The Chaz, as he has always been known at Lincoln Square. Rabbi Riskin recalled how the two of them became close friends when they were students at Yeshiva University and worked together at the twice yearly, week-long YU Torah Leadership Seminars, famed for their achievements in kiruv. “We always said that if ever I would have a shul, he would be the chazzan. I knew that it would be an outreach shul teaching Torah, but I also knew that it’s far easier to teach Torah than it is to teach how to daven.” 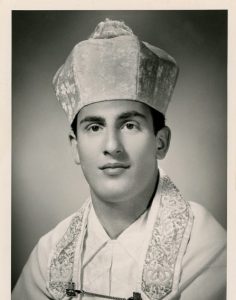 Sherwood Goffin grew up in New Haven, Connecticut, in a home where both his parents appreciated chazzanut, and he was put into a choir when he was around eight years old. Sherwood’s maternal grandfather was a Slonimer chassid, who was very involved in neginah (music). “Whenever the Bostoner Rebbe would come to New Haven, he would stay with my grandfather. When I was twelve, he told my parents they had to send me away to Yeshiva Torah Vodaath in Brooklyn to learn.” A cousin, Pia Weinstein, a former director of Camp Sternberg, recalls that “this was very hard on his parents, as he was an only child.”

Sherwood spent every Shabbat with the Bostoner Rebbe. “I had never heard singing like his long preludes to kiddush,” he says. “It made me feel like I was flying in heaven.” The Rebbe was a wonderful baal tefillah. “The intensity of his davening has stayed with me all my life,” notes Sherwood. Later, he would make Bostoner niggunim popular around the world.

While attending YU, he took courses at the Belz School of Jewish Music and, having taught himself to play the guitar, began performing as a folk singer.

In 1964, Glenn Richter, one of the founders of the Soviet Jewry movement, asked him to sing at the very first solidarity rally in New York, and Sherwood Goffin became the musical voice of the movement. “These were not pro forma appearances,” says Malcolm Hoenlein, executive vice chairman of the Conference of Presidents of Major American Jewish Organizations, who then headed the Greater New York Council for Soviet Jewry. “He was deeply committed. I can’t tell you how many times we called on him, and I can’t recall him ever saying no.”

His concerts and records earned him a reputation as a talented Jewish folk singer, whose sincerity was palpable. “In many ways he was a transformational figure for my generation,” says YU President Richard Joel, who became a great admirer of Sherwood as a young man at Torah Leadership Seminars. “In one of the songs that he popularized, The Little Bird, he made us feel a closeness both to Netzach Yisrael and to Medinat Yisrael as the culmination of the hopes of our people.” 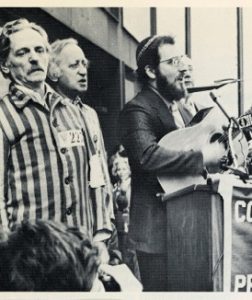 Cantor Goffin performing with his guitar at a Soviet Jewry rally with two Russians dressed in prisoner uniforms, circa 1970. Courtesy of Cantor Goffin

When in 1965 the call came from Rabbi Riskin that the newly formed Lincoln Square Synagogue was looking to hire a chazzan, Sherwood was set on a career as a psychologist. Since his teens, however, he had been taking part-time cantorial positions, first in New Haven, and then in the Bronx.

Stanley Getzler, later to become Lincoln Square’s president, and his wife Phyllis, were both members of LSS’s selection committee for the position of cantor. “Two other candidates came in who looked and sounded just the same as each other,” they remembered. Then Sherwood came in and he was different. “His voice was simple and pure, but what really got all of us was how his neshamah shone through.”

It seems that no one can talk about Sherwood Goffin without mentioning his neshamah. Even when I asked Sherwood’s wife Batya how he was when he returned home from shul each Shabbat morning, she told me, “Sometimes he’s a little too critical of himself. But the neshamah—I tell him this all the time: it’s your neshamah that really counts.”

To the Getzlers, it was very apparent that The Chaz would grow with them in the way they wanted the community to grow. For Sherwood himself, that meant getting more professional training: “I said, ‘If I’m going to do this, I must do it right,’ and so I took a leave of absence from City College where I was studying psychology, and got a degree in cantorial music at the Belz School, and I never went back.”

While the charismatic pull of Rabbi Riskin’s innovative teaching kept the shul filled each Shabbat way beyond capacity, everyone agrees that it was Sherwood’s innovative davening that fashioned its heart and soul. Heavy cantorial pieces were never his style. “We encouraged congregational singing far more than most other shuls did at the time,” says Sherwood, “but the niggunim had to be from a kodesh source, and not from any outside source.”

The providential partnership with Rabbi Riskin at LSS lasted nineteen years, a period the rabbi calls “a Camelot era in our lives.” Then, in the summer of 1985, tragedy struck when the Goffins’ daughter Nisa suddenly became ill and, after two harrowing weeks, passed away. The love and support that welled up from the synagogue was overwhelming, says Sherwood. “Somehow I managed to make up with Hakadosh Baruch Hu. And tefillah kept me going; if I hadn’t continued davening, I couldn’t have made it.”

With Rabbi Riskin having made aliyah, Sherwood, now grieving for Nisa, felt a little unstable, unsure what the relationship with the new rabbi might bring, and so he asked the shul for a lifetime contract, which was readily granted.

But he need not have worried. His relationship with LSS’s second rav, Rabbi Saul Berman—and all those who succeeded him—was characterized by close friendship and great mutual admiration. According to Rabbi Berman, who now teaches at both Stern College and Columbia University, “Sherwood avoids saying or doing anything that could possibly upset anyone in the universe.” And he recalls, “Davening with The Chaz, watching pathways to God open and shift, was a powerful experience that I’ve never had anywhere else.” The shul’s very popular current rav, Rabbi Shaul Robinson, considers himself to be “the most fortunate Jew, because I get to daven next to him. He radiates ahavat Yisrael, ahavat Hashem and sheer goodness.”

In 2014 Sherwood, now in his seventies, began to limit his duties at the shul, and a new chazzan, Yanky Lemmer, was appointed to gradually take over. Cantor Lemmer told me that, in a situation that could have been fraught, “we had a lot of conversations because our styles are very different, and the Chaz was amazingly supportive.”

Cantor Bernard Beer, director emeritus of the Belz School, where Sherwood continues as coordinator of outreach and teaches nussach hatefillah, relates that Sherwood Goffin is the model of a chazzan that shuls seek. “Don’t send us a Rosenblatt-wannabe,” they tell him, “send us a Sherwood Goffin.”

While Sherwood is mostly retired from the shul, he is still much in demand as a “chazzan-in-residence,” teaching the art of davening and leading Belz School’s outreach seminars in communities all across North America. But nowadays, he and Batya are able to spend more time in Baltimore with their children and ten grandchildren.

So after a career of fifty years, what, I asked, does he reflect on?

“My part in the Soviet Jewry movement, my involvement in NCSY and in the YU Seminars, my teaching at the Belz School and, of course, my role at Lincoln Square Synagogue—all these made me who I am,” he told me. “They made me into a personality that I would never otherwise have become. I feel comfortable that I will be able to stand before Hakadosh Baruch Hu after 120 years and say that I had a chelek in all these things. And I cannot tell you how grateful I am that I had all these experiences; the rewards were far and above anything else that could have happened.”

David Olivestone, former senior communications officer of the OU, and his wife Ceil, were active members of Lincoln Square Synagogue from 1973 until 1985. They now live in Jerusalem. 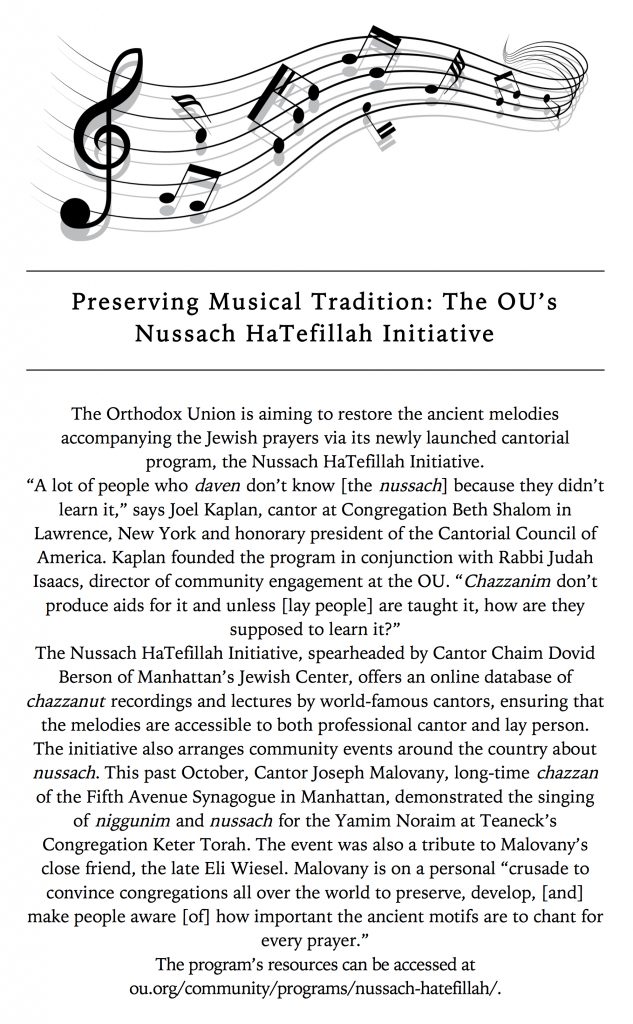