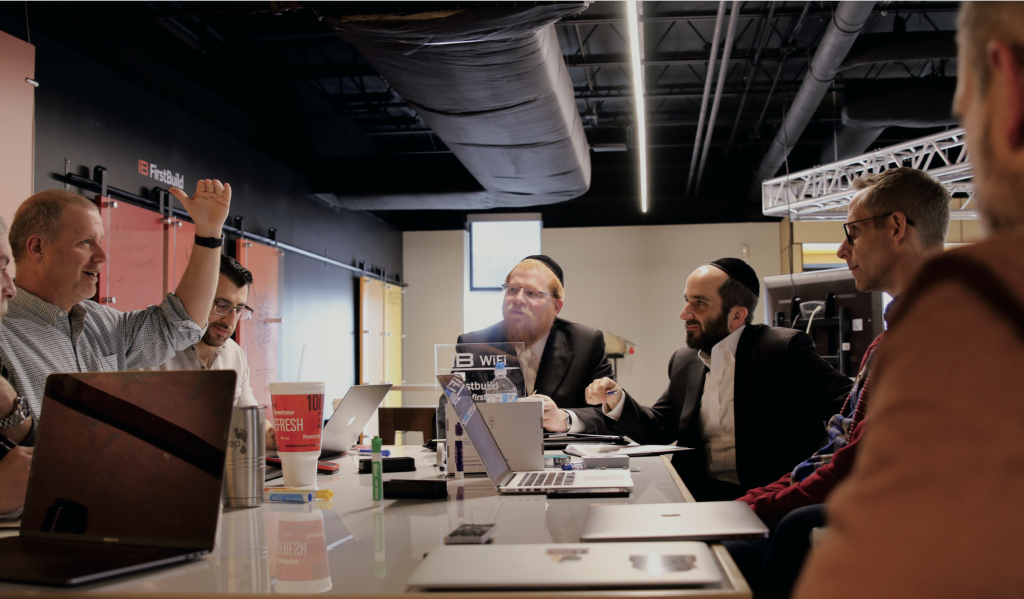 Rabbi Tzvi Ortner (center) meeting with GE staff during the development of the Shabbos Keeper. All images courtesy of ZMAN Technologies

Once upon a time, refrigerators were simple appliances, both in terms of what they did and how they operated. To use them on Shabbat, one just had to unscrew the light bulb. Today’s refrigerators—and indeed the rest of the appliances in the modern kitchen—are sophisticated machines, powered by a multitude of hidden computers, sensors and motors that present halachic hurdles unimaginable decades earlier. Some refrigerators can have as many as seven or eight computers on board.

Rabbi Tzvi Ortner, the OU’s first director of halacha and technology, remains undaunted. “These are challenges awaiting solutions,” he says, a belief that has fueled his work in the area of technology and halachah for ten years. Known as a solution-finder at OU Kosher, Rabbi Ortner, who joined the organization in 2017, now leads the effort to make smart kitchens entirely Shabbat and yom tov-friendly. “Rabbi Ortner is well positioned to not only come up with the problems [with modern-day appliances] but to come up with the solutions as well,” observes Rabbi Eli Gersten, who works for OU Kosher as the recorder of pesak and policy.

Born in Lod, Israel, where his father served as the city’s chief rabbi, Rabbi Ortner moved to the US after marrying his wife Rivky. He learned in kollel at Yeshiva Machzikei Hadas Rabbinical College in Brooklyn and completed yoreh yoreh semichah at the Rabbinical Court of Karlsburg in Boro Park, where he studied Jewish law in fields ranging from infertility to technology. He is a prominent rav, serving as mara d’atra of Congregation Chevra Linath Hazedek in Kensington, Brooklyn since 2018.

Though he holds a master’s degree in educational leadership, Rabbi Ortner has long been interested in practical halachah and its impact on the way Jews live. Highlighting how today’s kitchens pose challenges to Shabbat observance, he authored the Machshevet HaTzvi, a halachic responsa series, and launched Lemaaseh Publications to explain the ins and outs of new technologies as they come on the scene. For several years Rabbi Ortner worked directly with manufacturers to find solutions to help consumers, which led to his co-founding Halachic Tech USA in order to professionalize those efforts. It was his work at Halachic Tech USA, a company that researches, evaluates and makes recommendations on various products based on halachic sources, that brought him to the attention of OU Kosher COO Rabbi Moshe Elefant.

Rabbi Elefant was looking to fulfill the vision of Senior OU Posek Rabbi Yisroel Belsky zt”l, who foresaw how technological advances in our kitchens would increase the potential to be mechallel Shabbat and yom tov. He wanted the OU to develop safeguards to protect consumers but recognized early on that halachically compliant solutions rested in the hands of manufacturers. Enter Rabbi Ortner, whom Rabbi Elefant calls “the perfect match for the position, a talmid chacham with a serious halachic background and a firm grasp of cutting-edge technology.”

“Rabbi Ortner takes the initiative to build relationships with manufacturers that will make a difference as technology becomes increasingly intrusive in our lives,” says Rabbi Menachem Genack, CEO, OU Kosher.

In 2018, the Shabbos Keeper was developed through a partnership between the OU, GE Appliances and ZMAN Technologies, a device that is a game-changer for the Shabbat-observant consumer looking to buy a refrigerator. While a refrigerator’s Sabbath Mode must be set weekly—a task easy to forget on a busy Friday afternoon or erev chag—the Shabbos Keeper, preprogrammed with a Jewish calendar covering the next thirty years, is preset to deactivate all lights and other electronic bells and whistles for the duration of Shabbat and yom tov. All gadgets previously available on the market were “a patch or a Band-Aid that risked invalidating your warranty,” says Rabbi Elefant. By contrast, the Shabbos Keeper, a pocket-sized device that connects to a refrigerator through a data port, provides a total solution that makes using the refrigerator on Shabbat and yom tov 100 percent worry-free. The Shabbos Keeper, which interfaces directly with 150 GE refrigerator models, is currently available through geapplianceparts.com or zmantechnologies.com.

Rabbi Elefant considers Rabbi Ortner a “key force” behind the development of the Shabbos Keeper. Working closely with CEO of GE Appliances Kevin Nolan on a solution to make GE refrigerators compliant for Shabbat and yom tov use, Rabbi Ortner made countless trips to the company’s Kentucky operations for a year while development was in progress. “[After we developed the product] there was non-stop testing for an entire year to ensure the quality of the product,” Rabbi Ortner says.

While Rabbi Ortner agrees strongly with Rabbi Belsky’s insight that solutions must be found on the manufacturer level, he stresses that “it’s both a communal and an individual responsibility to see to it that it happens.” He encourages consumers to ask about Sabbath mode when shopping for major appliances.

He also notes the importance of closing the huge gap between what is available in Israel, where it is rare for large kitchen appliances not to have Sabbath mode, and what is available in the US. Currently, only one fully certified refrigerator exists on the American market, which is one of the reasons the Shabbos Keeper is so important. Finding a truly Shabbat-compliant product is more complicated than the average consumer would imagine, he points out. “There’s still a vast lack of information and choice, and this is where we hope to have the biggest impact.”

What else is on the horizon for Rabbi Ortner and the OU? A boiler that makes it possible to wash dishes on Shabbat with hot water, and outside the kitchen, a Shabbat-friendly CPAP machine. A pilot release of a Shabbos Keeper for a few GE oven models is planned for March 2020. The device will resolve the major pitfalls of Shabbat and yom tov use by disabling all sensors, as well as the temperature controls and the feature that turns the heating element on and off with the opening and closing of the oven door.

“As appliances become increasingly sophisticated and less Shabbat-friendly, we will need more of Rabbi Ortner’s solutions,” says Rabbi Gersten. “What we’ve seen so far is only the beginning of what he and the OU will be able to bring to the Jewish community.”

Merri Ukraincik is a writer and the author of I Live. Send Help: 100 Years of Jewish History in Images from the JDC Archives (New York, 2014).

More in this Section: The Next Frontier in Jewish Law: Artificial Intelligence 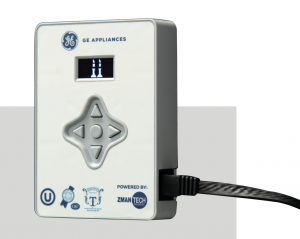 Developed by the OU, GE and ZMAN Technologies, the pocket-sized Shabbos Keeper is programmed with a Jewish calendar through the year 2050, and makes refrigerator use on Shabbat and yom tov 100 percent worry-free.

Key Features of the Shabbos Keeper

Available through geapplianceparts.com or zmantechnologies.com.

5 1 vote
Article Rating
This article was featured in the Spring 2020 issue of Jewish Action.