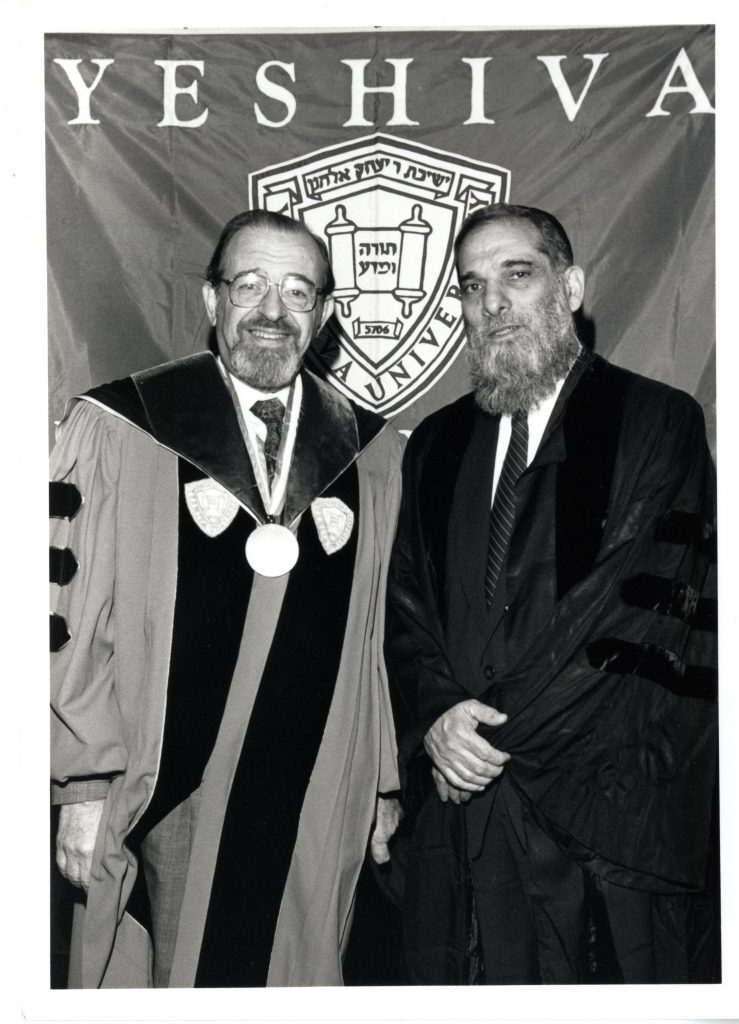 In the classrooms and lecture halls of Harvard, Dr. Twersky was a professor personified, a bearded man whose dark suits, occasional tweeds and dignified manner bespoke his role as a renowned authority on the 12th-century Jewish philosopher Maimonides and other medieval thinkers.

At home in suburban Brookline and in his long black kapote at the Congregation Beth David . . . he was every inch the dynastic Talner rebbe, the spiritual leader of a small Hasidic community his father had led a generation earlier, even as their Twersky ancestors had led congregations in Chernobyl, Ukraine, for centuries.

He. He had many faces and they were all one face. Professor Isadore Twersky (1930-1997) was the Nathan Littauer Professor of Hebrew Literature and Philosophy at Harvard University. Rabbi Yitzhak Twersky was a leading figure in the Jewish community of Brookline, Massachusetts. The Chassidic Talner Rebbe was the spiritual guide of a small but highly loyal and educated congregation, also in Brookline. The devotee and son-in-law of Rabbi Joseph B. Soloveitchik, preeminent Talmudist, was one of the Talmudist’s literary representatives and dedicated caretakers at the end of his life, both trusted family heir and awed, humbled disciple. The author of Rabad of Posquierès: A Twelfth-Century Talmudist and of Introduction to the Code of Maimonides was one of the leading figures in academic Jewish studies in his generation. The author of novellae on the Torah broadly understood—what he called “discontinuous critical investigations”—placed him squarely in the traditional non-academic world of “The Old Learning.” Of each of these persona individually and all of them in their unity, it may be said, as was said of the late Yisroel Movshovitz, “What was the greatness of Reb Yisroel? That nobody knew who he was. . . .”

Why did East European immigrant parents, a Chassidic rebbe and his pious wife, send their son to Boston Latin School, then to Harvard University, not to yeshivah? How did their son, a scion of a distinguished line of Chassidic rebbes, find favor with the daughter of the scion of the most distinguished line of opponents of the Chassidic movement, the daughter of Rabbi Soloveitchik? How did the earnest religious seeker, the son of the rebbe and the son-in-law of the great Talmudist, find favor with the skeptic of Harvard, the lonely man bereft of faith, Professor Harry Austryn Wolfson—so much favor that the religious young man became the dispassionate senior scholar of Judaica’s successor and trusted literary representative? How did the protegé, an Orthodox Jew, secure permission from his philosophically skeptical mentor, “an unobservant Orthodox Jew,” to focus his research on religious conviction and Jewish law?

Why did East European immigrant parents, a Chassidic rebbe and his pious wife, send their son to Boston Latin School, then to Harvard University, not to yeshivah?

There are no answers to these questions and never will be, none, at least, that will turn silences into sounds that satisfy, that will reach deeper than generalities and superficialities, that will reveal the core of the man and significantly attenuate the mystery that surrounded him in life, as in death. On one level, however, there is no mystery. On one level, all is pure and clear and simple: Professor Isadore, Rabbi Yitzhak, Rebbe Twersky was an unmistakable presence; with this one word he may be summed up. He. His presence will no sooner recur than the European Jewish civilization, the humanities-centered academia, or the softly shimmering piety of his parents, from all of which he sprang, yet surely did not embody. What was the greatness of Isadore Yitzhak Twersky? That nobody knew who he was.

Rabbi Dr. Hillel Goldberg is editor of the Intermountain Jewish News and a contributing editor of Jewish Action.

3 2 votes
Article Rating
This article was featured in the Spring 2021 issue of Jewish Action.