As I enter the large, multi-storied building owned by Karlin-Stolin on the outskirts of Beitar, I feel a rush of déjà vu. I’ve been here before, more than a decade ago when the building was a high school for boys from Ukraine called Lezion B’rina. Today, it’s still home to high school age boys, but this time they have long peyot and are wearing long coats.

One thing has not changed, however: the slightly built, enthusiastic principal. Rabbi Menachem Bombach was the under-thirty-year-old principal of Lezion B’rina. Today, at forty, Rabbi Bombach, the principal of Hamidrasha Hachasidit, now in its fourth year, is almost unchanged—the same warm smile, the same passionate visionary.

In its time, before the stream of Jews from Ukraine and the former Soviet Union (FSU) dried up, Lezion B’rina garnered prizes and accolades from Israel’s Ministry of Education for its education and integration of boys whose families were, for the most part, still in the FSU. But today Rabbi Bombach has embarked on a new, even more innovative vision: a school for high school age Chassidim that includes general studies in preparation for the high school matriculation exams.

Within the Lithuanian yeshivah community, there have always been a handful of institutions whose graduates go on to mainstream yeshivot after pursuing a double limudei kodesh and general studies program. Yishuv Hachadash is over seventy years old, and its graduates include some of Israel’s leading younger talmidei chachamim. Ma’arava Machon Rubin is in its thirty-fourth year. And there has been a recent jump in schools pursuing a double curriculum. Until Hamidrasha Hachasidit, however, no such institution existed in the Chassidic world.

“There are 500 kids on the street in Beitar at present. They represent the tip of the iceberg of a much larger group who are disaffected and not being reached in their chadorim and yeshivot ketanot.”

The time is ripe for such a school. Poverty is a major threat to the long-term viability of the Israeli Chareidi community. In Beitar, for instance, 60 percent of the youth live below the poverty line. Those who lack a basic secular education will be confined to menial jobs insufficient to support a large Chareidi family, unless they happen to be blessed with great entrepreneurial ability.

And the lack of integration into the Israeli economy of Chareidim—who will constitute 40 percent of the entering school children by 2018—is a major drag on that economy. Israel’s high-tech industry drives the economy, and is currently projecting a shortage of 10,000 computer programmers and engineers. If that shortage is not filled, Israel is in danger of losing its dominant position in the world of high-tech.

Chareidim constitute by far the largest untapped source of potential programmers and engineers. But without some knowledge of mathematics and at least a passive understanding of English, careers in high-tech are foreclosed. And with each passing year, English becomes harder to pick up. 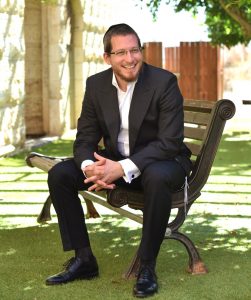 Rabbi Bombach, principal of Hamidrasha Hachasidit, has a BA in education from Moreshet Yaakov College and an MA in public policy from the Hebrew University. He is a graduate of the Maoz International Program, which spends two weeks at Harvard Business School. Recently, he was awarded the Religious Education Prize.

Like any innovation in the Chareidi community, Hamidrasha Hachasidit has aroused opposition: Rabbi Bombach has been physically assaulted in the Meah Shearim neighborhood in which he grew up and his door tarred shut in Beitar. But Hamidrasha is not a renegade institution. It has the strong support of the Karlin-Stolin Rebbe, who attended a recent hachnasat sefer Torah for the yeshivah. Most talmidim obtained permission to attend from their family’s rebbe, and in a number of cases they were sent by the Karlin-Stolin Rebbe.

The dress and grooming code is as strict as in any Chassidic yeshivah ketanah.

One of Rabbi Bombach’s principal goals is deepening the connection of the talmidim to Chassidut. “Every week, Rabbi Yechiel Yehudah Neustadt, a well-known speaker in Chassidic circles, gives a shiur in Chassidut. When the bachurim were asked by a Channel-10 interviewer what Chassidut means to them, they answered proudly: “It means performing mitzvot with a real bren, with joy and great emotion;” “Chassidut means davening with kavanah [concentration] and hitlahavut [spiritual enthusiasm] and not just reciting the words.”

Before opening Hamidrasha Hachasidit, Rabbi Bombach promised the Stoliner Rebbe that he would not take from the 10 to 20 percent of bachurim who have the ability and desire to learn Gemara ten hours a day, as in the standard yeshivah ketanah. At least one student, the son of a rabbi, who had never enjoyed Gemara learning, improved significantly at Hamidrasha and left after two years to go to a major yeshivah gedolah.

While not accepting those who will thrive on a schedule of exclusive Gemara study into the yeshivah, Rabbi Bombach does not accept those with significant learning difficulties either. The double curriculum, much of it in completely unfamiliar subjects, would prove overwhelming, especially for the 50 percent of talmidim who come from primarily Yiddish-speaking homes. (Rabbi Bombach himself did not speak a word of Hebrew until he was twenty.)

It would be a mistake to view the sole “chiddush” (innovation) of Hamidrasha Hachasidit as the introduction of general studies. Rabbi Bombach’s educational goals go far beyond that. He seeks to provide each bachur with the tools to face life’s challenges, to succeed as a member of his own community and to be capable of functioning smoothly within the larger Israeli society.

Rabbi Bombach gives a weekly “Life Skills” class that covers a wide range of subjects: from middot development—empathy, how to listen to others, the dangers of stereotyping—to more practical topics like decision-making, money management, how to develop and deliver a derashah, health and personal hygiene. The Life Skills class also provides an opportunity for free-flowing discussion, forcing the talmidim to think more deeply. A recent video of Rabbi Bombach teaching a class on Yom Hazikaron (Remembrance Day for Fallen Soldiers) went viral. He passed around a photo of a young boy prostrate on the grave of his father, and asked the talmidim to share their feelings.

“How many times have you thought about Hakadosh Baruch Hu today?” is an example of a question Rabbi Bombach might throw out to get the conversation flowing. The imperative of making a kiddush Hashem at all times, taking responsibility for others and the community and the seriousness of hurting a fellow Jew in any way are all stressed constantly. (Hamidrasha’s web site draws 600 visitors a day, most of them attracted to the various Life Skills talks.)

“Hamidrasha is a yeshivah that is built entirely for the bachurim,” says Rabbi Zvi Adler, the first-year Gemara rebbi. It does not exist to provide anyone with a good living and certainly not kavod. “If Menachem learns from one of the families who live in the dorm that a particular bachur is lacking clothing, he’ll take him out and buy him what he needs.” 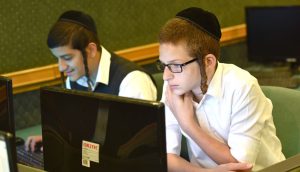 In some respects, Hamidrasha Hachasidit reminds one of descriptions of the Bais HaTalmud of Kelm under the Alter in the multiple ways in which mussar messages are conveyed. There is a regular rotation of jobs among the bachurim, as in Kelm. Every Rosh Chodesh, the yeshivah takes a trip to a special place for tefillah. But those trips are also combined with some kind of chesed project. One recent Rosh Chodesh, the bachurim harvested eight and a half tons of produce that would have gone to waste and will instead go to poor people. In such ways is achrayut (responsibility) for one’s fellow Jews instilled.

The talmidim are encouraged to explore and develop their talents. After a long day, there are numerous chugim: guitar playing, choir and sports. Besides the Life Skills class, bachurim have many opportunities to discuss what is on their minds. Rabbi Matisyahu Deutsch, a highly respected Stoliner Chassid, is in Hamidrasha seven hours a day meeting with bachurim.

Helping each bachur reach his full potential requires a dedicated and highly trained staff. Rabbi Bombach requires each rebbe or teacher to acquire a pedagogy degree, usually at Michlalah in Bayit Vegan, with a concentration on the subject he teaches. Rabbi Adler shares, for instance, how eye-opening one class, “How the Talmid Experiences a Gemara Shiur,” was for him. Even the married dorm counselors who live on the premises have to take courses relevant to their responsibilities. And there are ongoing educational seminars on the campus.

He points out that there are 500 kids on the street in Beitar at present. They represent the tip of the iceberg of a much larger group who are disaffected and not being reached in their chadorim and yeshivot ketanot.

That is Rabbi Bombach’s approach as well. “My goal is to preserve our beautiful communities. But sometimes you have to adapt in order to preserve in an ever-changing world.”

Yonoson Rosenblum is the author of ten books, eight of them biographies of modern Jewish leaders. In addition, he is a weekly columnist for Mishpacha.