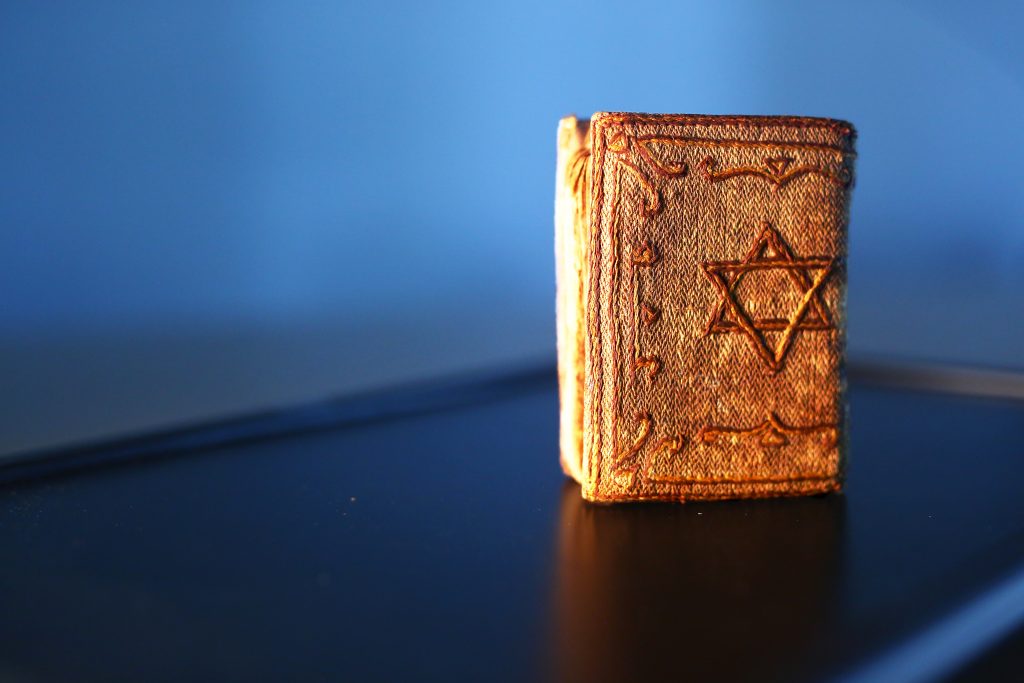 My young daughter was playing in my mother’s living room and approached me holding a battered prayer book she found on the shelf. When I realized what it was, I gasped. I hadn’t thought of it in years, but the siddur is a family treasure. My grandmother, Raizel Berger, a native of the Maramures region of Romania, was sent to Auschwitz along with her family in 1944. She managed to smuggle a small siddur into the camp by hiding it in her stocking garter. The young women in her bunker, mostly Chasidic Jews from Romania and Hungary, took turns praying from it each night. One of the girls worked in the kitchen and snuck out a potato sack to use as a cover for the siddur, onto which she used a rough yarn to beautifully embroider a Star of David in the center. The pages of the siddur are delicate with age, but the section of Tehillim (Psalms) is particularly worn from repeated use.

After the war, my grandmother married my grandfather, a Holocaust survivor from Poland. They moved to the United States and had four daughters in quick succession. The siddur continued to be used on a daily basis in their brownstone home in Brooklyn. Each holiday, my grandparents lit dozens of Yizkor candles for their many murdered family members. But their resilience to transition into loving parents and industrious new immigrants almost immediately after surviving such horrors still baffles the mind. So too the siddur, once hidden in the bowels of a dark dungeon and used by inmates of the most horrific and debased place on earth, transitioned to use for mundane, though still holy, daily prayers. In unsentimental fashion typical of Jews of my grandparents’ type, the siddur was not treated as a talisman. At some point, someone even scrawled a phone number on the inside cover.

My grandmother passed away from lung disease when she was seventy-four, likely related to the tuberculosis that she contracted in the camps. When my grandfather sold their home, the siddur moved from its unnoteworthy spot on my grandparents’ bookshelf to an equally unremarkable spot on my parents’ bookshelf.

This year, an Auschwitz exhibit opened at the Museum of Jewish Heritage—A Living Memorial to the Holocaust in New York City (Auschwitz. Not Long Ago. Not Far Away). After years of not doing much with the siddur, publicity surrounding the exhibit prompted my mother to contact Dr. Robert Jan Van Pelt, one of the historians involved, to see if he would be interested in including it in the exhibit. In their exchange, Dr. Van Pelt provided a full account of the precise names of the concentration camps in which my grandmother was imprisoned, including exact dates. He also, quite remarkably, shared an excerpt from a memoir of Geordie Hussar, a POW interned at a slave labor camp where my grandmother ended up at the end the war. Hussar describes the Jewish prisoners, my grandmother almost certainly among them: We were appalled by the spectacle of a large group of young women, hardly recognizable as such, being marched into the factory yard and stood outside the empty block. It’s hard to describe one’s feelings of sorrow at the [sight] of those thin, bedraggled, shaven headed, soulless looking girls . . .

For years, our family conceived of my grandmother’s Holocaust experience through her eyes. The siddur was a kind of symbol of that perspective, which understood her story as anything but “soulless.” My grandmother and her bunkmates lost nearly everything. But in spite of, or perhaps because of it all, they continued to pour out their hearts and souls to their Creator. The addition of a more historical point of view adds a new documentary type of layer to the story. But it is only a layer, which sits atop the living heart of the matter. The siddur didn’t make it to the exhibit in the end—it still sits on the same shelf in my mother’s home.

Since the Shoah, much has been written about the place of the Holocaust in Jewish memory and theology. This discussion, understandably, often focuses on the Holocaust as a kind of inflection point in the relationship and covenant between God and the Jewish people. Yet, for some Jews like my grandmother who lived through the horror itself, there is perhaps more continuity between the pre- and post-Holocaust eras than those abstract discussions assume. Like her siddur—smuggled into Auschwitz, but also consistently and faithfully prayed from in a Brooklyn home long after the events of the war receded into history.

Sarah Rindner’s writings on Jewish and literary topics have appeared in the Jewish Review of Books, Mosaic Magazine and other publications. She lives in Israel with her family.