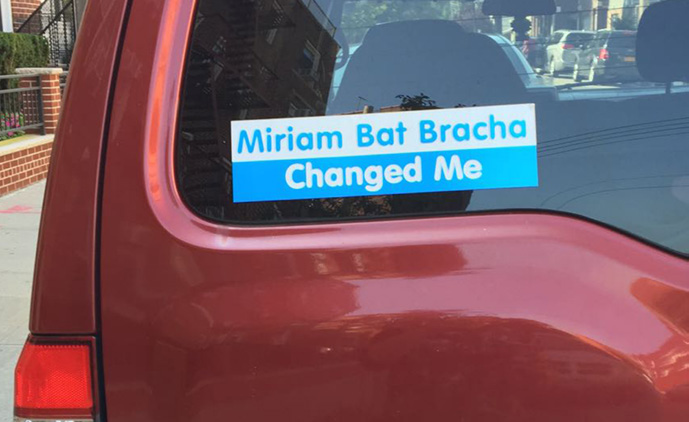 I always thought tragedy was something that happened to other people: the fatal car crash, the devastating diagnosis, the freak accident. I lived in a rose-colored bubble in which normal people got married, raised kids, and the cycle repeated itself tranquilly.

That bubble proved as fragile and evanescent as the ones I blow with my grandchildren on the front steps. It burst when our beautiful twenty-eight-year-old daughter, Miriam, suffered an amniotic embolism while giving birth. Doctors struggled for hours to stabilize her, but the long resuscitation left her in a coma with dire predictions about her ability to regain function. Four months later, her neshamah left this world.

Miriam, a”h, left behind a husband, a six year old and four year old, and a new baby who looks just like her. Our ordeal took us from Maimonides Medical Center in Brooklyn to Columbia University Medical Center in Manhattan to the long-term-care wing of Monmouth Medical Center in Lakewood, New Jersey. Throughout, our lives became a high-suspense movie where the ending was ever in doubt—and quite possibly wouldn’t be the happy one. It was a grueling exercise in emunah and bitachon.

When, after several weeks, Miriam had stabilized and looked like herself again, people would visit and marvel that she looked like a sleeping beauty. Perhaps the allusion to the fairy tale was apropos. Sleeping Beauty, you may recall, was blessed by good fairies with beauty and charm. Then a bad fairy, insulted the family neglected to invite her to the party, storms in and gives a curse that she’ll prick her finger on a spindle and die young. As the crowd gasps in horror, a good fairy who happened to be running late (Jewish time?) rushes in. “I can’t undo the curse,” she says, “but I can soften it. Sleeping Beauty won’t die; she’ll fall asleep until her prince comes to awaken her.”

You could turn this into a mashal: my daughter will “sleep” until Mashiach, our Prince, arrives to wake the world. But it’s the idea of softening a harsh decree that stands out. It seemed as if Hashem imposed an agonizing gezeirah on our family and community. But it was tempered by the support of that same exceptional family and community, and by the way He gave us time to prepare for the worst while praying for the best.

From the minute Miriam became sick, the community came flying to our side. She gave birth on Shabbat, erev Chanukah, and people only found out as the first Chanukah candles were lit. Despite family celebrations, the lounge in the ICU floor burgeoned with community members coming with food, tears of sympathy, and words of prayer and comfort. Sephardic Bikur Holim helped work out arrangements for care of the baby and other children; askanim helped negotiate the confusing morass of insurance coverage. Orthodox doctors stopped by to check on Miriam’s care and offer counsel; Rebbes and rabbis came to give berachot. When I would finally run home to sleep that first week, my head swam not just from stress but the sheer number of people I’d met all day.

Miriam was transferred to Columbia, on the hope that its state-of-the-art Neurology Department could help her. Instead, Columbia gave up. We had to enlist the aid of Chayim Aruchim, which assists frum families in making health care decisions according to halachah, to prevent the hospital from discontinuing life support. After much arm-twisting, we transferred her to Monmouth South.

Lakewood proved to be salubrious for Miriam, at least initially. Her kidneys began working; her wounds healed; her face regained its smooth complexion. Again, the community rallied to help us—this time, the good people of Lakewood and Deal as well as Brooklyn friends, family and people who had simply heard of the situation and wanted to offer support.

Miriam Chaya bat Bracha became everyone’s favorite mitzvah effort: Ashkenazim, Syrians, Moroccans, Lubavitchers, other Chassidim. Not only did she have round-the-clock visitation, she became the impetus for a slew of berachot parties, sheitl-trimming parties, asifahs (gatherings) and Tehillim groups. After an asifah in which Rabbi Zecharia Wallerstein spoke about the need to push ourselves the extra mile to make shalom, we heard myriad stories of people who had made peace with ex-friends and family members, sometimes after many years. Many people began taking on stricter mitzvah observances—tefillin, tzeniut, lighting Shabbos candles early—as a zechut for her. It was as if the Jewish community was waiting for a spark to ignite its spiritual might, and the plight of a young mother felled by childbirth motivated them to shake the heavens and push themselves to grow in hopes of a miracle.

Sadly, the miracle we worked so hard to elicit didn’t happen. Miriam contracted an infection and passed away Rosh Chodesh Iyar. I don’t know where my family would be if our community, and Hashem, hadn’t carried us along and kept us from total despair throughout.

A couple of weeks ago, my daughter-in-law texted a photo she’d taken of a car parked in our neighborhood. It sported a bumper sticker that made my heart stop. “Miriam bat Bracha changed my life,” it read.

Miriam changed all our lives. May we continue to grow, and only from good things.

5 1 vote
Article Rating
This article was featured in the Winter 2017 issue of Jewish Action.