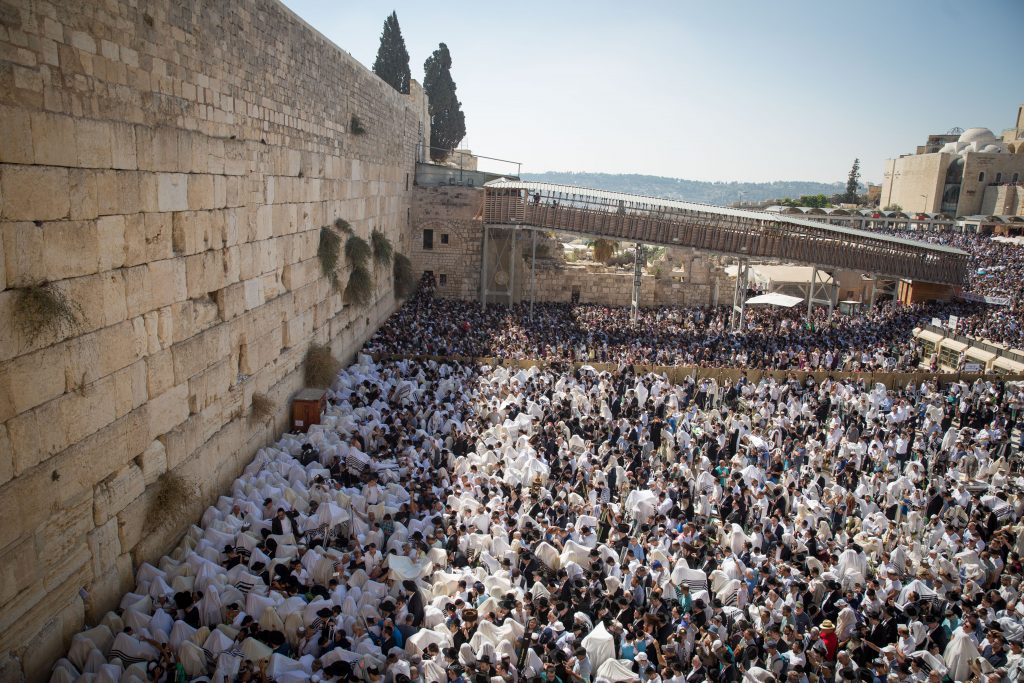 What do the kohanim think about when they say the Priestly Blessing?

The Torah (Bemidbar 6:22-27) instructs the kohanim to confer a three-part blessing on their fellow Israelites and sets out the text they are to say. After the destruction of the Temple, the Birkat Kohanim blessing (also called nesi’at kapayim, but popularly known in the Ashkenazi world as duchenen) was incorporated into the repetition of the amidah. Outside Israel, it takes place only thirteen times per year, during Musaf on festivals, while in Israel it is part of the daily and Shabbat Shacharit amidot, as well as of the Musaf of Shabbat, festivals and Rosh Chodesh.1

According to the halachah, the kohanim should impart their blessing with “intense concentration and a full heart,” and they must be in a happy mood.2

But what, in actual fact, does go through their heads?

An informal survey of over two dozen kohanim3 established without a doubt that they all take their responsibility very seriously and regard it as a surpassing privilege.

Being only human, there are those who readily admit to having very mundane thoughts as they go up to duchen, such as trying to remember exactly where they left their shoes or if they checked their socks for holes that morning.4 Some find themselves vying to get to their favorite spot in front of the aron kodesh before another kohen takes it, or resigning themselves to contending with at least one fellow kohen who sings off key, or who insists on singing his own nigun while the rest are singing something else.

Another logistical problem that engages some as they step up to the aron kodesh is how close they will have to stand to the next fellow. This is because the kohanim swing their arms from side to side as they say those words that include “you,” as if to encompass all the people standing in front of them. Collisions have been known to occur.

But the kohanim have a private prayer to say before being called to their task by the chazan, asking God to help them deliver the entire blessing faultlessly, and many find that it inspires them to focus on their role. “I use that moment to make sure I’m not taking myself too seriously,” says Rabbi Baruch Taub, rabbi emeritus of Beth Avraham Yoseph Congregation (BAYT) of Toronto. “I’m here only by virtue of my father and grandfather, through the generations all the way back.”

Rabbi Elchanan Adler, rosh yeshivah at Yeshiva University’s Rabbi Isaac Elchanan Theological Seminary (RIETS) finds that the introductory paragraph “vete’erav” triggers a yearning in him for the role of the kohen in the long-ago Beit Hamikdash. “This is especially strong on Yom Kippur,” he notes, “after we have gone through the lengthy description of the seder avodah [the Temple service].”

When asked which word or phrase in the berachah preceding the Priestly Blessing itself they feel is the most important or meaningful, the majority of kohanim opt for the very last word, “be’ahavah—with love.”5 This reflects Hillel’s famous statement that Aharon, the ancestor of all kohanim, was “ohev et ha’briyot umekorvan laTorah—he exuded love for people and brought them close to Torah” (Pirkei Avot 1:12).

In fact, a kohen who does not feel love for all those in the shul, or who has a grudge against someone there, should not duchen.6 “The way to get me to think of you specifically during Birkat Kohanim,” says Jerusalemite Howie Kahn, “is to have a disagreement with me beforehand. Then I’ll make sure to forgive you and to single you out when I say the berachah.” 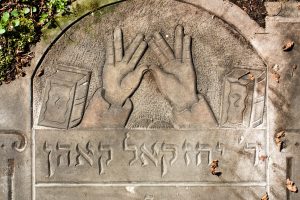 Gravestone of a kohen in a Jewish cemetery displays an engraving of how the kohanim hold their hands during Birkat Kohanim.

Many kohanim do take the opportunity to think of friends or relatives who could, for some reason, use an extra berachah. Dr. Simcha Katz, a past president of the OU, says families sometimes ask him to keep a sick relative in mind. “It doesn’t matter if the person isn’t present to hear the berachah themselves,” he says. “God gives the kohen the capacity to relay His blessing to those who need it.” Alan Weisrose, who duchens in Edgware, in northwest London, thinks first of family members, but moves quickly onto his community and all of Klal Yisrael. “I wish everybody well,” he says.

In contrast, others make sure not to single anybody out. Rabbi Dr. David Katz of Teaneck, New Jersey, tries not to think of individuals because, he maintains, “Who are you to decide who needs the berachah more than any other? It’s God’s berachah that you are conveying. You can’t mess with it.”

Not every kohen cites “be’ahavah” as the most meaningful word or phrase in the berachah preceding Birkat Kohanim. For example, Howie Beigelman, executive director of Ohio Jewish Communities, thinks it’s “ve’tzivanu levarech” (“Who commanded us to bless”) because that’s what validates the role of the kohanim. “Our task,” he feels, “is to help draw down and direct the blessing.”

The majority of kohanim express this feeling by describing themselves as a conduit. However, Eli Katz, author of Va’ani Avorechem—A Guide to Birchas Cohanim, strongly disagrees, insisting that they have an active part to play. “According to Rabbi Akiva (Chullin 49a),” Katz explains, “the kohanim say their blessing and God ratifies their intentions. So what the kohanim are thinking is integral for the fulfillment of the mitzvah and for the success of the berachah.”

Just as the kohanim have a private prayer in which to ask God for success before Birkat Kohanim, so they have another once it is over. This is a serious moment for many kohanim to validate that they have carried out their duty as best they know how. For Simcha Katz, it’s one of the most meaningful moments of his davening. It quotes the verse from Devarim 26:15 that asks God to bless His people Israel and also the Land of Israel which, for Israelis, particularly hits home. Living in Israel, Rabbi Taub says, fosters in him “an elevated excitement of the potential of what I’m doing.”

But those who visit Israel from time to time contrast the relatively rapid pace at which Birkat Kohanim is said in Israeli synagogues with the more stately ceremony that takes place in the Diaspora. They do find the experience enhanced in Israel, but feel also that it barely allows them any time for serious thought. “It seems almost routine there,” says Rabbi Adler, “but also more real.”

For many, however, taking part in the mass Birkat Kohanim at the Kotel with hundreds of other kohanim on chol hamo’ed Sukkot and Pesach is quite a different experience. US Ambassador to Israel David Friedman has done this several times and has said that he is “very blessed to have this opportunity” and that for him “it is more exciting each time.”

Despite the fact that the congregation is not supposed to look at the kohanim when they duchen, it’s unlikely that there is anyone who has never sneaked a peek. What we see is generation upon generation of the aristocracy of our people who discharge their obligation with great sincerity and dedication, and who do their part to help bring about the myriad blessings that God promises us.

1. This is true for most of Israel, but in the majority of communities in the north of the country, Birkat Kohanim takes place only during Musaf of Shabbat, festivals and Rosh Chodesh.

2. See Rema, Shulchan Aruch, Orach Chaim 128:44, and also Rashi to Bemidbar 6:23, quoting the Midrash (Bemidbar Rabbah 11:4). There are, of course, many rabbinic commentaries on the pesukim of the Priestly Blessing, and various connotations of meaning that have been ascribed to them for kohanim to ponder, but these are beyond the scope of this informal survey.

3. In addition to those named in the article, I thank Rabbi Nachman Kahana, Rabbi Dr. Shlomo Riskin, Dr. Perry Davis, Peter Faber, Joseph Kaplan, Yitz Katz, Stephen Steiner and the many other kohanim to whom I spoke, for sharing their thoughts with me.

4. Whether the kohanim may wear “happy” socks with smiley faces or other bright designs which might distract the congregation from concentrating on the blessing has been the subject of halachic responsa, with Rav Moshe Feinstein, zt”l, permitting them (Iggerot Moshe, OC 2:32). Rav Moshe doesn’t say this, but perhaps wearing happy socks might help the kohanim to be in the happy mood the halachah requires of them when they go up to duchen.

5. This is the only berachah said before a mitzvah that ends with this evocative expression. According to Mishnah Berurah (OC 128:37, based on Zohar on Naso 147b), the word “be’ahavah” was added to emphasize that there must be complete harmony between the kohanim and the congregation. The author of the Mishnah Berurah, Rabbi Yisrael Meir Kagan, universally known as the Chofetz Chaim, was himself a kohen.

David Olivestone, a member of the Editorial Committee of Jewish Action, lives in Jerusalem. Among his previous contributions to the magazine are articles on what goes on inside the minds of a ba’al teki’ah and of a chazan.

What Should The Congregation Be Thinking?

Is the role of the non-kohen merely a passive one? Are members of the congregation just to listen to the blessings uttered by the kohanim and simply “absorb” them?

There are numerous indications in rabbinic literature to the contrary.

For example, the author of Sefer Chareidim, the sixteenth-century sage Rabbi Elazar Azikri, insists that the mitzvah of Birkat Kohanim is incumbent upon the recipients of the blessing as much as it is upon the kohanim themselves. He writes, “Yisraelim, who stand facing the kohanim in silence, and concentrate their hearts toward receiving their blessing as the word of God, are also part of the mitzvah.” For this author, to whom the poem Yedid Nefesh is attributed, devout silence and active kavanah are required of every non-kohen.

A colleague of Rabbi Azikri’s in the Safed spiritual community, Rabbi Moshe ben Yosef miTrani, known by the acronym Mabi”t, agrees. He writes: “The kohen blesses Yisrael, and the Yisrael must affirm his blessing and not say to himself, ‘Of what benefit is this simpleton’s blessing?’ He, the Yisrael, is an integral part of the mitzvah.”

The Talmud (Berachot 55b) suggests a specific text to be recited while the kohanim are pronouncing the blessing. It is prescribed for those who have recently experienced troubling dreams. This practice is codified in the Shulchan Aruch (OC 130) and is included in standard siddurim and machzorim.

Rabbi Daniel Korobkin, rabbi of Beth Avraham Yoseph Congregation (BAYT) of Toronto, himself a kohen, sums up these considerations very well. He offers this response to those who ask what the reaction of the congregation should be to Birkat Kohanim: “They should feel the love and warm embrace of a berachah enveloping them, removing their anxieties and bad dreams, and filling them with optimism and hope for the future.”

Rabbi Dr. Tzvi Hersh Weinreb is executive vice president, emeritus, of the OU and a member of the Jewish Action Editorial Committee.

5 1 vote
Article Rating
This article was featured in the Fall 2019 issue of Jewish Action.