With the recent boom in direct-to-consumer (DTC) DNA testing, more than thirty million individuals have taken the test. Until recently, these tests were done primarily to explore the general ancestry origin of the consumer. Many people want to know from which regions of the world their parents or grandparents hail, whether it be Eastern Europe or the Middle East. There are dozens of examples of DNA testing resulting in the identification of lost close family members . . . or even criminals. But to say with certainty that you are 80 percent Eastern European (Ashkenazi), 4 percent Irish or 12 percent Scandinavian is based on limited scientific data. It is important to recognize that genetics is a probabilistic science and we have a lot more to learn about it.

In the past few years, companies began to expand the use of DTC DNA testing beyond providing general ancestry information. For example, with the approval of the US Food and Drug Administration (FDA), a company called 23andMe now informs customers of potential genetic relatives, as well as a whole suite of genetic mutations that may lead to ill health. 23andMe also offers to provide information about recessive genetic variants of diseases that may not affect an individual’s health but could affect the health of his or her children.

Other companies, such as Vitagene and TeloYears, use DNA testing to assess a person’s so-called longevity potential. TeloYears measures certain DNA sequences (i.e., telomere length) in blood cells to help a person assess how long he or she is likely to live. Vitagene claims that its DNA testing will help individuals choose which vitamins are most appropriate for their bodies, and even sells a personalized “optimum” vitamin regimen for $79 per month. Helix uses DNA testing to inform their clients of their athletic abilities and recommends personalized nutrition and sleep regimens to get into optimal shape. Other companies advertise that their DNA testing will better educate consumers as to what type of diet or lifestyle they should follow to achieve their weight loss goals. These companies claim that awareness of genetic predisposition to disease motivates people to take preventive action to improve their health.

What level of reliance can one have on commercial DNA testing? There is a big difference between the authenticity of DNA results obtained from certified genetic testing centers and the reports created by DTC genetic testing companies. On the face of it, the medical and genetic information provided by commercial companies demonstrates a lack of professional accountability. For example, 23andMe only tests for three of the most common BRCA mutations associated with an increased risk of getting breast cancer. In fact, there are almost 1,000 BRCA mutations that need to be assayed in order to provide an accurate assessment of the risk for developing breast or ovarian cancers. In addition, not all of these BRCA mutations are deleterious because there may be other gene variants that an individual can carry that may mitigate the risk of cancer. Since the consumer has a limited understanding of genetic testing and its practical ramifications, these over-the-counter tests can lead one to make serious mistakes.

Revealing markers for potential genetic diseases in the absence of a genetic counselor poses serious psychological and medical problems. If a customer is told she has no genetic markers for breast cancer, this does not mean that she has no risk at all. Yet, this information may lead a woman to forgo recommended cancer testing, such as mammograms, as she ages. To avoid liability, testing companies such as 23andMe make it clear that their data should not be used for medical diagnoses. Yet, this disclosure automatically limits the reliability of the information which they present, for the purpose of acting on their dietary, health and medical suggestions.

Privacy of consumers’ information is another issue which one should be aware of before giving a biospecimen to a DTC genetic testing company. Even when privacy disclosure forms are clear, which is often not the case, they are long and difficult to read. The result is that one may unsuspectingly be providing personal information to health researchers or to biotech companies; it is now becoming clear that several of these companies share their DNA information with major pharmaceutical firms. One might also be unwittingly making one’s personal information public to be used for the purposes of law enforcement or other interests. Although federal regulations attempt to protect genetic privacy and prevent information from being used in discriminatory ways, the law lags behind new, innovative abuses of people’s privacy.

In halachah, one may not depend on a siman like a scientific sign (even one that has strong evidentiary reliability, such as DNA), unless there is also a reliable witness. The ruling in the Shulchan Aruch regarding the reliability of testimony when the evidence presented is strong is as follows: “If [two people] found him . . . and if they identified extremely reliable signs (simanim muvhakim) on his body, they may testify to his death.”1 In his gloss, Rabbi Moshe Isserles adds, “Any identification sign which is acceptable from an Israelite witness is similarly acceptable from a non-Jew who is conversing innocently (masiach lefi tumo).”2 This ruling implies that the reliability of the evidentiary sign is necessary but insufficient—the witnesses who testify regarding the identity of the person must also be reliable. The reliability of a non-Jew as a witness is based on the presumption that he or she has nothing to gain through misrepresentation. Reliable testimony can also be expected from a person whose professional reputation would be damaged if his testimony is inaccurate. For example, Rabbi Karo rules, “If a non-permissible food item that was mixed with a permissible item that is not of its type . . . a non-Jew should taste it; if he says that it has no fat (chelev) taste or if he says that it has taste but the taste is bad (pagum), it is permitted. The non-Jewish witness must not be aware that he is being depended upon as a witness.”3

Regarding the information provided by DTC genetic testing companies, one must take into account the ad hominem criterion when considering their reliability, i.e., whether they have any legal liability if their reports are inaccurate. For example, they inform a consumer that she is carrying a cancer gene and she proceeds to have a prophylactic mastectomy. Subsequently she discovers that she does not, in fact, carry that cancer gene. Is the genetic testing company legally liable for presenting misinformation?

With respect to situations where DTC genetic testing companies provide personalized dietary and other regimens, their reliability is suspect. This is because they have a vested interest in the information they are providing. For example, a DTC genetic testing company might offer to provide one with a customized daily diet or vitamins to lose weight based upon that individual’s genetic information.

GlaxoSmithKline bought a $300 million stake in 23andMe in 2018, contingent on access to some of the testing company’s data. The data that 23andMe shares with GlaxoSmithKline is supposed to be anonymous. Halachah recognizes that one can believe a person with a vested interest if the negative consequences of lying are worse than the benefit gained.4 This principle generally applies to medical professionals, such as physicians, who take their fiduciary responsibilities to their patients very seriously and where malpractice laws are firmly enforced.5 Commercial DNA testing companies, however, do not have a fiduciary responsibility to their customers. 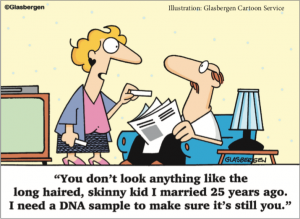 When it comes to matters related to yichus, this is a question that must be weighed carefully, given the verifiability of the evidence and the gravity of the consequences. Mitochondrial DNA, the genetic material present in cellular bodies called mitochondria, is inherited exclusively from one’s mother. There is now data showing that the maternally transmitted mitochondrial genetic markers K1a1b1a, K1a9, K2a2a and N1b are common among Ashkenazi Jews, but rarely seen in anyone else. Common Jewish markers located on the Y-chromosome include J (and its subgroups) and E1b1b. Possessing one of these genetic markers may be a reliable indicator of Jewish ancestry according to several rabbinical experts in Israel. Even the Knesset is considering legislation for using these markers as indicators of Jewishness.6 But using DTC genetic testing to provide consumers with their possible Jewish lineage is problematic for several reasons. First, DTC genetic testing companies do not engage in extensive mitochondrial DNA testing, thus rendering their ancestry conclusions halachically invalid. Furthermore, any revelation of potential fathers or mothers who appear to be not Jewish is again halachically questionable, because of DTC genetic companies’ lack of scientific accuracy and the principle that we don’t use DNA to render a person a mamzer.

Hence, while there is no halachic prohibition to submit to commercial genetic testing, the ethical and halachic ramifications that arise limit its use.  Discovering unknown relatives or alleged paternity relationships using genetic testing has no significance halachically. Similarly, discovering that your ancestry does not originate in countries where, historically, large populations of Jews lived, does not invalidate your Jewish status or yichus.

The complexity of genetics and its relationship to halachic identity and disease risks poses a legal, halachic and ethical challenge in the reliance on DTC genetic-testing companies for accurate information. Genetic testing with respect to general ancestry might be interesting to some but also has the potential to give people medical information that causes more damage than benefit.

In summary, genetic testing for the purpose of health requires genetic counseling and education, both prior to performing the tests and after receiving the results. As such, any serious DNA testing for health issues must be done by clinically certified laboratories where professional genetic counselors provide the results to the consumer. Halachah is very sensitive to the psychological stigmas and stresses that medical and genetic information can elicit. The possibility that such information may impact future marriages and create psychological stresses are valid reasons why Jews without a family history of genetic diseases should not use commercial DNA tests. Therefore, both the rabbinical community and the FDA should warn the public of the potential harm in using these DNA tests for medical purposes. People should also be fully aware of the ramifications of using even non-medical information for knowledge of their own and others’ personal lineage.

The acquisition of personal knowledge can often feel powerful. However, the acquisition of DNA information by the uneducated consumer can lead to misinformation and erroneous decisions. In the US, we have a wonderful professional community of genetic counselors that can guide consumers with regard to their genetic backgrounds and profiles. These counselors are more expensive to employ but much more reliable than commercial DNA testing companies.

3. Shulchan Aruch, Yoreh Deah 98:1.  See, however, Rabbi Isserles’ comment, “It is not done today to trust a non-Jew, and we measure against sixty.”

5. This speaks to the integrity of the physician, yet it does not mean that one should comply with a physician’s recommendations, especially if he disregards halachah. Regarding the validity of a physician’s diagnoses and recommendations vis-à-vis halachah, see Rabbi Yitzchok Zilberstein, Shiurei Torah L’Rofim, vol. 4, p. 343-4.

Dr. John Loike is professor of biology at Touro College and University System and writes a monthly column on the frontiers of bioethics for The Scientist Magazine.

Rabbi Moshe Tendler is a rosh yeshivah at Rabbi Isaac Elchanan Theological Seminary (RIETS), the Rabbi Isaac and Bella Tendler Professor of Jewish Medical Ethics and a professor of biology at Yeshiva University.

Ira Bedzow is assistant professor of medicine and director of the biomedical ethics and humanities program at New York Medical College, and senior scholar of the Aspen Center for Social Values.