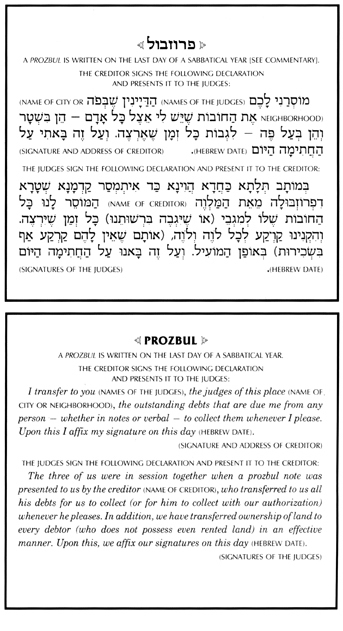 Does the Torah take more of a socialist or a capitalist approach to society?

The Torah, in fact, embraces aspects of both socialism and capitalism. The Aseret Hadibrot, Ten Commandments, concludes with a warning not to covet one’s neighbor’s property,1 which underscores an appreciation for individual ownership. Masechet Avot2 understands that a society that eschews personal property, where “what is mine is yours and what is yours in mine,” is a society of the ignoramus and is doomed to failure. At the same time, however, the Torah clearly calls for a redistribution of wealth and property with its multitude of socioeconomic welfare laws. Some of these include tithes, the commandment to leave standing grain in the corner of the field for the poor, the release of ownership of the land every seventh year (shemittah), the return of ancestral lands to the original owners in the yovel year (the Jubilee year) and the cancellation of all debts at the end3 of the shemittah year (shemittat kesafim).

Shemittat kesafim entails the following: To absolve the debts of anyone who borrowed money during the previous seven years, to refrain from demanding payments for such loans and to not refuse lending money because of these requirements. Unlike shemittah of the land, shemittat kesafim applies throughout the world, not only in the Land of Israel.

Rav Ovadiah Seforno4 explains that the Jewish people were given Shabbat—a day devoted solely to spiritual pursuits and the negation of materialism—to emphasize that melachah (work) and the acquisition of wealth are not the highest pursuits in life. The Mechilta points out that the Jewish people were already keeping Shabbat when they received the Torah5 and were therefore prepared to accept the many mitzvot that demand one forgo material pursuits for spiritual ones. These mitzvot include laws governing business ethics and interpersonal monetary dealings, such as shemittat kesafim. Sefer Hachinuch6 adds that the purpose behind shemittat kesafim is to help us develop the attributes of generosity and kindness. By willingly absolving all the loans we make to our fellow Jews every shemittah year, we will surely become more attuned to the Torah laws regarding interpersonal monetary dealings and will certainly not take the possessions of others unlawfully.

The Prozbul
About a century before the destruction of the Temple, in the first century CE, Hillel observed that many people refused to loan money before a shemittah year, fearing that it would not be paid back before the debt was automatically cancelled. In response, he devised a loophole called a prozbul whose function is to transfer the debt to a Jewish court.7 During the shemittah year, all loans made to one’s fellow Jews are automatically canceled,8 but shemittah does not affect debts whose bonds belong to a court. The Talmud maintains that Hillel was able to create this legal loophole because shemittat kesafim only applies when the Jewish nation observes yovel. When yovel is not declared, as in the days of Hillel, these laws are rabbinic in nature and are thus subject to his ordinance. (Yovel can only be observed when the majority of Jews live in the Land of Israel, which was not the case in Hillel’s time.)

The word prozbul is a contraction of “pruz buli ubuti,”9 which translates as “an advantage to the rich and the poor.” The prozbul benefited the rich by securing their loans and helped the poor by enabling them to borrow money even with a shemittah year approaching.

In a gloss to the Shulchan Aruch, the Rema declares that prozbuls eventually fell into disuse due to the opinion held by most Rishonim that shemittah laws are no longer Biblically ordained.10

By willingly absolving all the loans we make to our fellow Jews every shemittah year, we will surely become more attuned to the Torah laws regarding interpersonal monetary dealings.

Today, the practice of writing a prozbul is becoming more popular. Since a prozbul protects only the loans made until the time it is written, it is generally completed on erev Rosh Hashanah, the last day of the shemittah year. Along with the rush to abrogate vows on erev Rosh Hashanah, many shuls therefore allocate time for congregants to fill out a prozbul.

The process is fairly simple. The creditor signs a declaration announcing his intention to collect the debts due to him. The declaration is then signed by three “judges,” who, according to the Rema, can be any three individuals. One prozbul can cover all of one’s loans, even those made to different people. One need not keep the actual document past Rosh Hashanah. This is because during the Hadrianic persecutions, when religious practices were forbidden under pain of death and it was hazardous to own a prozbul, the rabbis ruled that a creditor could collect his debt without producing the actual document.11 This later became normative law, such that the creditor need not prove that he really has a prozbul, and is believed if he says it was lost.12

A prozbul is only effective if, at the time the document is written, the borrower owns property from which the debt can be collected. The prozbul is valid even if the debtor only owns a flowerpot or rents property. The creditor may also transfer a small parcel to the borrower to ensure the prozbul’s effectiveness.13

The prozbul, however, is not a cause for self-congratulation. It is, in a sense, a failure. Whereas the prozbul ensures that a creditor does not violate Torah law by collecting that which is owed to him, it also results in our forgetting the mitzvah of shemittat kesafim, which was intended to assist the farmer in the Land of Israel who must sacrifice his means of support during the shemittah year. It is the responsibility of the community to support the farmer during this economically challenging time, and one way of doing so is by absolving him of his debts. In a perfect world, the farmer would allow everyone into a field that he doesn’t own for the year because the banks would release all the loans he took out for the farm’s upkeep. Unfortunately, no one releases loans anymore and the mitzvah of shemittat kesafim is on the verge of being forgotten.

To ensure that shemittat kesafim is observed, at least symbolically, I suggest the following: During Selichot services, pass around a dollar bill to everyone in shul. Each person should ceremoniously lend the dollar to his neighbor. After it has made its way around the shul, let the rabbi count down—“three, two, one.” All the congregants should then joyously cry out “Tashmet!” (Release!), signifying that all are absolved of their one-dollar loans.

This is just a formality. There is a simpler way to ensure the observance of shemittat kesafim: Don’t fill out a prozbul! The end of Masechet Shevi’it speaks about the praise of one who repays a loan even if a prozbul was not written. So be it. Let us also praise the one who follows the law and its spirit.

Rabbi Schwartz is rabbi of Congregation Ohab Zedek, or OZ, in New York.

Notes
1. Shemot 20:13
2. Avot 5:13
3. Devarim 15:1. The Rosh was of the opinion that debts are released at the beginning and end of the shemittah year. Therefore, some have the custom of obtaining a prozbul before the Rosh Hashanah of shemittah and then again the following year.
4. Vayikra 23:1
5. “Lo nitnah Torah elah leshomrei Shabbat” (Mechilta Shemot 6:23).
6. Mitzvah 480
7. “Every creditor shall release that which he has lent his neighbor” (Devarim 15:2).
8. Mishnah Shevi’it 9:3
9. Gittin 37a. According to Marcus Jastrow it is an abbreviation of the Greek expression meaning “before the assembly of counselors,” as the loan had to be transferred to an assembly of the court.
10. Shulchan Aruch, Choshen Mishpat 67:33
11. Mishnah Ketubot 9:9
12. Shulchan Aruch, Choshen Mishpat 67:33
13. Mishnah Shevi’it 10:6; Gittin 37a

4.5 2 votes
Article Rating
This article was featured in the Fall 2008 issue of Jewish Action.