With mass shootings and terror attacks in the news with frightening frequency, it is only natural for the average civilian to want to be able to defend himself. Indeed, fear of attacks has caused some to advocate bringing guns to shul. What are some of the halachic issues concerning purchasing or carrying a gun?

Below are a few things to consider:

SAFETY FIRST
The Torah prohibits placing hazards in one’s home (Devarim 22:8). Rambam, Hilchot Rotzei’ach 11:4, states that one must remove all potentially lethal hazards from one’s possession. Gun owners must act with the utmost caution to ensure that all guns are secured in a location that is not accessible to children or others who may accidentally discharge the weapon. While many states require a gun safety course as a prerequisite for receiving a permit, it is incumbent upon a gun owner to regularly review gun safety protocols and follow the safety precautions taught in these courses. If one is not going to follow commonly accepted safety protocols, one should not purchase a gun.

DEFINING DANGER
The Torah prohibits placing oneself into a situation of danger (based on the verses in Devarim, chap. 4 [see Berachot 32b and Sh’vuot 36a]). Rabbi Hershel Schachter, B’Ikvei HaTzon no. 34, notes that one can distinguish between dangerous activities that most people would not engage in (“category A”—such as civilians walking through an active war zone) and activities that only some people would refrain from and others would engage in (“category B”—such as undergoing certain risky medical procedures for elective purposes). Regarding category A, the prohibition against self-endangerment applies to all people regardless of whether they themselves are concerned about the danger. Regarding category B, the prohibition only applies to those who are concerned about the danger. 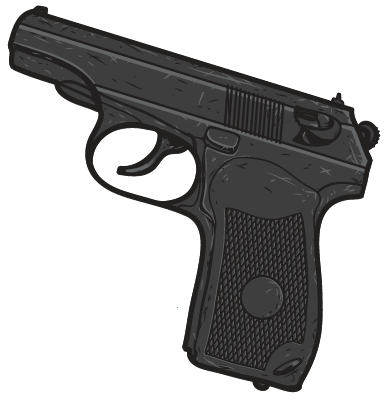 Carrying a gun will generally not provide sufficient protection in a category A situation to justify endangering oneself. If one were to walk through a war zone, a gun would do little to make one safer. However, in a category B situation, carrying a gun may help alleviate the concerns of those who are nervous. For example, if people are refraining from attending shul because of fear of an attack, and having armed security guards would alleviate their fear, then having armed guards would provide a concrete benefit, both on a practical level and from a halachic perspective. Yet much of the controversy surrounding carrying a gun to shul centers on situations that don’t fall into category A or B. The situation, at least here in the US is not, as of this writing, B”H, so dangerous that people are refraining from attending shul or school. Nevertheless, while the threat of danger is too remote for the situation to be categorized as “dangerous” from a halachic point of view, it still may still be worthwhile (and perhaps a fulfillment of the mitzvah to safeguard one’s life) to have armed guards or armed volunteers as an added measure of protection and to help alleviate the fears of those who are attending. [In almost every area of life, we take precautions and add safety measures even when the situation does not even qualify as a category B, whether it is the use of enhanced auto safety features, screening ourselves for rare diseases or wearing protective equipment while engaging in leisure activities.]

Recently, there has been much discussion about bringing weapons to shul or to have teachers carry weapons in schools. This is a sensitive subject. On the one hand, armed citizens could provide greater protection for the institution. On the other hand, a gun-carrying private citizen may not respond appropriately in the event of an attack and his actions may cause more harm than good. The decision to allow congregants or teachers to carry a gun in order to protect a synagogue or school is something that the rabbinic leaders and lay leaders of the institution should decide after consulting with security experts or local law enforcement. It goes without saying that anyone carrying a weapon in an institution, whether professional or volunteer, should undergo rigorous training to ensure that their presence makes the situation safer and not more dangerous.

WEAPONS IN SHUL?
There are halachic problems with bringing a weapon into a synagogue in general, and specifically on Shabbat (see Shulchan Aruch, Orach Chaim 151:6; Shemirat Shabbat Kehilchatah, chap. 20; note 28 regarding muktzeh). For security reasons, there are certainly grounds for leniency (see Piskei Teshuvot 151:16 and SSK op. cit.). However, given that the leniency is based on the fact that security overrides the other concerns, the rabbi should consult with security experts or local law enforcement to determine how many gun-carrying individuals are necessary for the security of the institution. For security reasons and for halachic reasons, if an institution allows or encourages members to come armed to the synagogue, it should be through a coordinated, rather than a haphazard, effort.