Why the campus has become an ideal training ground for rabbis 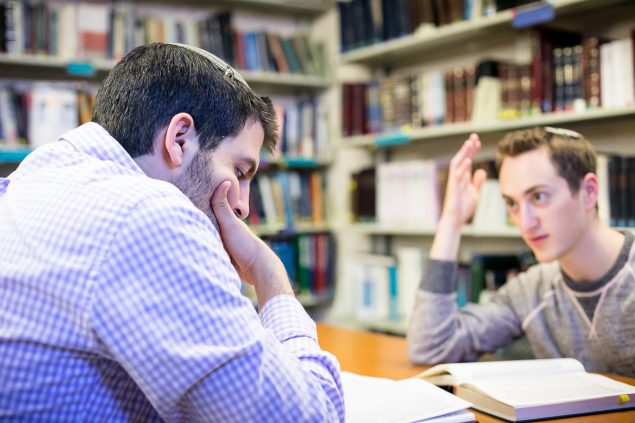 Ed. Note: OU-JLIC’s educators work together as a team to strengthen Orthodox life on campus. The program’s success is rooted in the fact that it primarily hires husband-and-wife teams—enabling couples to serve as religious mentors for both men and women. The article below focuses on how the OU-JLIC experience prepares rabbis for the pulpit. In a future issue, we will explore the critical role of female OU-JLIC educators as well as rebbetzins in the community.

While there are many paths to the rabbinate, aspiring pulpit rabbis generally opt to attend an appropriate semichah program, segue into a position as an assistant rabbi and then take on a congregation of their own. Today, however, some newly-minted rabbis are opting to hone their skills not in communities, but on college campuses. Serving as educators through the OU’s Heshe and Harriet Seif Jewish Learning Initiative on Campus (OU-JLIC), these campus rabbis develop a close-up view of the next generation’s needs, concerns and sensitivities. OU-JLIC, designed to help Orthodox students navigate religious life on secular campuses, is currently found on twenty-three university campuses across the US and Canada.

“Trends start on the campus,” says Rabbi Ilan Haber, the national director of OU-JLIC for the past twelve years. “That makes our rabbis especially equipped to understand the dynamics that will play out in shuls down the road.”

Regardless of where a rabbi falls on the Orthodox spectrum, much of the job today is about counseling and inspiring congregants. Being a rabbi is no longer just about paskening what to do when the milchig spoon falls into a fleshig pot.

Campuses tend to be ultra-liberal environments in which anti-Semitism and anti-Zionist sentiments are no longer anathema, and are even considered politically correct in some circles. Campus life ricochets between intense bouts of studying and intense bouts of no-holds-barred partying. And with gender roles and identities often called into question, rabbis are increasingly being called upon to deal with students’ sensitive questions in these areas. “Campuses are five to ten years ahead of where a congregation is in dealing with issues like gender equality or alternative lifestyles,” says Rabbi Noah Cheses, a former OU-JLIC rabbi at Yale University who currently serves as rabbi of the Young Israel of Sharon, Massachusetts.

But gender identity issues extend way beyond the university. “All rabbis, from Chassidic to the most Modern Orthodox, are challenged by this,” says Rabbi Dr. Tzvi Hersh Weinreb, executive vice president, emeritus, of the Orthodox Union.

Indeed, conflicts between Torah values and modern secular beliefs may be heightened on the campus, where young people often find themselves confronting professors whose beliefs challenge their own. At this stage of life, students have plenty of freedom and time to contemplate the Big Questions. But while the OU-JLIC rabbi finds himself tackling these clashes, inevitably they arise sooner or later for every shul rabbi on one level or another.

Preparing for the Pulpit
Like pulpit rabbis, OU-JLIC rabbis organize minyanim, give shiurim and derashot, host community members for Shabbat meals and help their congregants negotiate life-cycle events. “A campus is not so different from a shul, even in terms of size,” says Rabbi Ronald Schwarzberg, director of Jewish Career Guidance and Placement at Yeshiva University. “At campuses like Rutgers or Maryland, a rabbi can be dealing with hundreds of Orthodox students. The rabbis are also dealing with faculty and administration, organizing lectures and programs, and serving as ambassadors of the Orthodox community to other religious groups.”

When Rabbi David Wolkenfeld, a former OU-JLIC rabbi at Princeton University and now the rabbi of Anshei Shalom Bnai Israel Congregation in Chicago, made the transition from campus to congregation, he found the greater administrative demands required some adjustment. “A synagogue rabbi has to be the CEO of the shul,” he says. “He’s an administrator who’s involved in programming, in addition to pastoral work and Torah teaching.” But Rabbi Eli Kohl, who spent seven years as the OU-JLIC rabbi at the University of Maryland, had already managed a very large kehillah and dealt with hundreds of students (the Orthodox presence doubled during his tenure there). When Rabbi Kohl began looking for a pulpit, someone suggested he take an assistant rabbi position. He responded, “But I’ve been doing more than many senior rabbis!”

Trends start on the campus . . . that makes our rabbis especially equipped to understand the dynamics that will play out in shuls down the road.

Campus rabbis tend to transition well into the formal rabbinate because the campus, says Rabbi Schwarzberg, “provides a wealth of organizational, pastoral and leadership opportunities.” An OU-JLIC rabbi will typically have some students who’ve returned from studying in yeshivah in Israel and have a sophisticated level of Gemara mastery, while others may rank as beginners. Regardless of level, the average college student is bright and requires an engaging lesson. Similarly, a pulpit rabbi’s duties include delivering shiurim and derashot that appeal to a wide range of attendees with varying degrees of Jewish knowledge. Exploring innovative ways to reach one’s students or congregants is key for an effective rabbi. “These [OU-JLIC] rabbis are exploring new ways to convey halachah and mussar,” says Rabbi Weinreb. “They aren’t kiruv rabbis, but there may be elements of kiruv in their work. They’re also involved in kiruv for Orthodox youth who have been disillusioned and need a rabbi to make Torah study interesting and inspiring for them. Then there’s the challenge of how to make tefillah meaningful. That’s a big issue in pulpits as well as on campuses.”

Recently, an article on Forbes.com addressed the growing challenge of maintaining synagogue membership. According to the article, young Jewish professionals are resisting institutional affiliation, which is having an impact on Orthodox shuls. This is one of the trends Rabbis Wolkenfeld and Cheses observed during their tenure as OU-JLIC rabbis—the millennial preference for niche minyanim like hashkamah or house minyanim instead of the main minyanim at large shuls. Having witnessed this trend, they understood the need for “micro-communities” once they became congregational rabbis, and introduced innovations such as a monthly Carlebach Friday night davening that alternates between the shul and someone’s home. “We learned how to serve the needs of this generation while convincing them of the importance of the ‘main minyan’ and affiliation with the large Orthodox institutions,” says Rabbi Wolkenfeld.

Building Communities
Many former OU-JLIC rabbis feel that one of the most important skills they honed on campus is the ability to build a community—one relationship at time. OU-JLIC rabbis tend to devote most of their time to building personal, deep and trusting relationships with as many students as possible. “Honing this ability to build community through individual relationships has enabled us to do the same in a congregational setting, ” says Rabbi Wolkenfeld.

When Rabbi Cheses served as rabbi in Toronto, he created a vibrant community of young professionals. He did this by forging close relationships with congregants—he usually split his time between providing spiritual counseling and learning Torah with congregants. This eventually led to the creation of a dynamic professionals committee that met every few weeks to plan engaging, fun events (i.e., mystery Shabbat lunches), which attracted new members and brought many members from the periphery of the community to the center.

For an OU-JLIC rabbi, the buck stops with him. Often there’s no one else around.

The community one builds on campus will, of course, consist of a younger, more specific demographic than the typical shul population; OU-JLIC rabbis officiate at fewer britot, weddings and funerals. Rabbi Wolkenfeld, however, points out that serving a more narrow demographic isn’t true only of campus rabbis: “Many shuls are composed primarily of either younger or older people.”

But OU-JLIC rabbis are also available for professors, who aren’t youngsters and may be dealing with births of children or grandchildren, caring for elderly parents or coping with children choosing a different religious path.

“In some places, the OU-JLIC rabbi heads the only Orthodox minyan in town, so many non-students join,” Rabbi Wolkenfeld says. Rabbi Weinreb concurs: “For an OU-JLIC rabbi, the buck stops with him. Often there’s no one else around.” 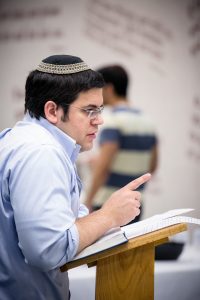 Rabbi Ari Neuman served as a religious advisor and mentor to the 500 Orthodox students on the University of Maryland College Park campus.

One of the biggest misconceptions, says Rabbi Ari Neuman, who served as an OU-JLIC educator at the University of Maryland for three years, is that when people hear the term “campus rabbi,” they immediately think that it’s a kiruv position. But OU-JLIC educators work primarily with the Orthodox student population on campus. While Rabbi Neuman, for example, did interface with the nearly 6,000 Jewish students at the University of Maryland, his primary role was to serve as a religious advisor and mentor to the 500 Orthodox students on campus. His experiences there were remarkably broad: he taught the students how to run a kosher kitchen; he answered their theological questions; he oversaw the campus eruv.

“Everything I do in the rabbinate, I’ve done in OU-JLIC,” says Rabbi Neuman, who currently serves as the assistant rabbi of Congregation Torat Emet in Columbus, Ohio. “I have yet to find something I haven’t done [at Maryland]. Unfortunately, I even had to officiate at a funeral.”

In fact, even some of the challenges are the same. The key issue today is engagement, says Rabbi Neuman. On campus, most students attended Friday night services and dinner, since Friday night is a big night out on the campus, but attendance on Shabbat morning was weak. The situation in his shul is reversed: Friday night sees less of a crowd but on Shabbat day, parents tend to bring their kids for services. “It’s really the same challenge: why aren’t people engaged in Jewish life the way they should be?”

So many of the same dynamics and stresses of “regular” life exist on campus. Students may have difficult relationships with their peers, they may struggle with sick parents, or suffer from loneliness or depression or other mental illnesses.

“Regardless of where a rabbi falls on the Orthodox spectrum, much of the job today is about counseling and inspiring congregants,” Rabbi Weinreb says. “Being a rabbi is no longer just about paskening what to do when the milchig spoon falls into a fleshig pot.”

The bottom line, Rabbi Cheses points out, is that “human problems are human problems, whether you’re twenty or eighty years old. Loneliness, anger or broken family relationships happen at all ages.”