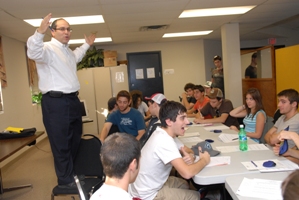 Rabbi Glenn Black of Toronto believes in giving credit where credit is due. In exchange for high school credit, he’s convincing thousands of unaffiliated Jewish teenagers to give up two and a half hours of their sacred after-school time to attend a rejuvenated version of the traditional Hebrew school. Some might call it incentive, others bribery, but one thing’s for sure—it’s working.

Welcome to Torah High, a private afterschool program where students get not only high school credit but also Jewish knowledge, Jewish friendships and kosher pizza. The brainchild of Rabbi Black, director of NCSY strategic planning and CEO of NCSY Canada, Torah High offers classes once a week for a forty-week semester, exposing students to Torah-true Judaism in a fun, non-threatening setting.

“Anyone teaching teenagers faces the challenge of motivating an iPod-captivated generation,” says Rabbi Yisroel Rabinowitz (a.k.a “Rebo”), principal of Torah High Toronto since its inception seven years ago. “Our mission is to make Jewish studies relevant to today’s teenager. To generate an atmosphere that is not only intellectually but also emotionally stimulating—where students feel they can voice their opinions and feel good about connecting to Judaism.”

Reaching around 700 students each year, the Torah Highs in Canada, found in Toronto, Ottawa, Hamilton and Vancouver, have, thus far, touched the lives of 2,700 eighth through twelfth graders. Torah High classes—in topics such as Jewish ethics and philosophy, Jewish leadership, history and advocacy, music and visual arts and Hebrew language—are accredited by the local ministries of education. Students must complete 110 hours of instruction per course to earn credit and can also gain hours by attending NCSY Shabbatonim. “We are an alternative for teenagers who don’t have access to Jewish education,” says Rabbi Black. “We’re giving them an opportunity that they’ve never had before.” Additionally, Torah High offers many of its courses over the summer through its programs in Israel.

To attract students, Torah High uses an aggressive and creative marketing approach, running advertisements for the program in movie theaters and on highway billboards and city buses. Just in case the credit isn’t enough of a motivator, Rabbi Black employs other enticements: He raises funds to raffle off lavish prizes to Torah High students. So far, he has given away a brand new Mini-Cooper and several laptops. One of the most impressive prizes included the use of a private jet to any location in North America along with a hotel stay, limousine service and spending money.

A Spiritual Change in Course
Nicole Gruz, eighteen, gladly piled on Torah High credits in Jewish philosophy and Jewish leadership, and was able to finish high school a semester early.

“[Before attending Torah High] I didn’t know what being Jewish meant,” she says. “I was sixteen and concentrating on what [every girl] in high school concentrates on—music and boys. Now, being Jewish is the most important thing in my life.”

Gruz, from Thornhill, Ontario, looks forward to attending seminary in Israel next year, and to eventually getting involved in kiruv. “I want to give back to NCSY and the community what they’ve given to me,” she says. “I see that I was totally on the wrong path and how much [Torah High’s teachers] saved my life. I couldn’t have envisioned I’d be where I am today, not in a million years. I’m grounded and I have direction.”

The school’s “come-as-you-are” approach encourages students to speak their minds and to ask questions. It has kept students like Gruz coming back for more and, in many cases, changed the course of their lives.

“I challenged the rabbis at Torah High,” says Matan Hazanov, a nineteen-year-old from Thornhill who attended the program. “I asked them: How can we know that God exists? Why would He allow His people to suffer? What about the divisions within the Jewish community here and in Israel? Why keep Shabbat? Why is keeping kosher significant?”

Since NCSY was first established in 1954, hundreds of thousands of teenagers have come closer to Judaism because of their involvement in the youth movement.

He liked the way they answered his questions and went back to ask some more. “The teachers didn’t look down on me because I wasn’t religious, which surprised me,” he says. He admits that although getting high school credit is what initially sparked his interest, after attending a few classes his feelings changed. “It wasn’t the credit anymore,” he says. “I enjoyed the learning.

“Now, instead of going out and partying Friday nights, I spend Shabbat with the Torah High rebbeim and their families. I recognize that God is in my life and I try to build on my connection with Him daily.”

Recently elected to serve as president of Hillel at York University in Toronto, Hazanov puts on tefillin every day and continues to learn Torah with Rabbi Rabinowitz. “I would like to become an observant Jew,” he says, “and find a wife who shares the same life goals and raise a Jewish family.”

Torah High Gets High Marks
In 2006, NCSY hired sociologist Randal F. Schnoor, at the Centre for Jewish Studies at York University, to conduct a study to determine Torah High’s effectiveness. The study confirmed that in a time of rocketing assimilation, Torah High is definitely an idea whose time has come: More than 70 percent of the respondents reported feeling a stronger sense of Jewish identity since joining the program, 48 percent reported a stronger belief in God, and over half acknowledged they feel the importance of marrying a Jewish person and providing their future children with a Jewish education more intensely.

“It’s powerful having a third party coming in and saying, ‘What I’ve seen is that you have something very valuable and here’s the proof,’” says Rabbi Black. “When you spend forty classes, which translates into ninety hours, plus the Shabbatonim, all within a Jewish environment, you have [the makings of] a transformative experience. By the dozens, these kids are turning to Torah and mitzvot.”

Rabbi Lashak emphasizes that the key component in getting teens excited about Judaism is the teachers. “Kiruv is about relationships,” he says. “If they have a close admiring relationship with their teachers, they will want to emulate them.”

Rabbi Black insists that even the students who haven’t made obvious life changes are deeply affected by their exposure to genuine Torah learning. “We have seen successes in students who didn’t make the change in high school, yet go on to other [outreach] programs in university,” says Rabbi Black. “We have two categories here, the ‘practically frum’ [those who take on the mitzvot] and the ‘attitudinally frum,’ teenagers who acknowledge [the value of] observant Jewish life and would like to actually live it, but are not supported at home. If you were to ask these kids what they want their Saturdays to look like in ten years, they’d say they want it to look like Shabbat. These teens want to grow. The challenge is to help them maintain that desire.”

In an effort to build on that spiritual momentum, Torah High is partnering with Aish HaTorah’s Jerusalem Fellowship program, which takes university students to Israel each summer.

Rabbi Black aims to reach between 1,500 and 2,000 more of Canada’s teens per year, and to launch Torah Highs across North America and beyond. He also hopes to establish “Torah High Lite,” fun and exciting non-academic programming such as classes in karate, Jewish music and Jewish cooking. Additionally, he plans to develop customized programs to reach out to Russian immigrants and Israelis, providing classes that would more effectively “speak to them.”

Originating in 2002 with one club, the Jewish Student Union (JSU), an agency of NCSY, now operates close to 250 clubs across the United States and Canada, involving 8,000 teens annually. In its seven-year history, it has served more than three million slices of free kosher pizza to public school teens. Hence the JSU slogan: JSU—Connecting teens to Judaism, one slice at a time.

Jewish Pride in the Heart of Texas
Inspired by the success in Canada, Rabbi Israel Lashak, regional director of the NCSY Southwest Region, launched Torah High in Dallas, Texas, in 2006. Like Canada’s program, Torah High Dallas offers courses in Hebrew, Jewish philosophy and Jewish history. But because of the strict separation between church and state in the United States, it is unable to grant high school credit for its courses. To attract students, Rabbi Lashak came up with another tempting deal. In exchange for registering for a full semester, students receive an all-expenses-paid vacation to Miami and Key Largo, Florida; throw in some in-class pizza and doughnuts and after-class trips for slurpees and you’ve got a substantial draw.

The Dallas staff focus their recruitment efforts on JSU (Jewish Student Union) clubs. (JSU, an agency of NCSY, organizes student-initiated Jewish clubs in some 200 public schools across the US.)

“We invite students who express an interest in learning more about Judaism,” says Rabbi Lashak. “There is a huge gap between JSU and teens in a Jewish [day] school. That’s where Torah High comes in.”

Rabbi Lashak emphasizes that the key component in getting teens excited about Judaism is the teachers. “Kiruv is about relationships,” he says. “If they have a close admiring relationship with their teachers, they will want to emulate them.”

Torah High’s appealing incentive tactics, welcoming atmosphere and dynamic teachers continue to pull in high schoolers and keep them coming back. Of course, the trips and Torah High’s investment of about $4,000 a year on slurpees don’t hurt. As more communities hear about Torah High’s successes, this innovative program keeps cropping up across the map. This past fall, Torah Highs were kicked off in Chicago and Houston, and Torah High Seattle opened its doors for a second year.

“It’s phenomenal that we are at this place in Jewish life, that we are getting hundreds upon hundreds [of assimilated youth] to participate,” says Rabbi Black. “We have what we believe is a winning formula.”