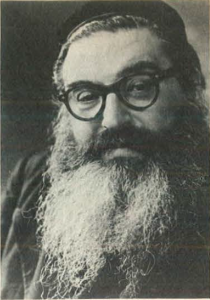 Time and again we have to face the difficult task of defining ourselves in a world of alien values—the values of Western civilization. This burden of defining ourselves was never forgotten; we find it abundantly in the Talmud and in a profusion of Midrashim, it is the very core of the philosophical systematization in the Middle Ages and its weight is fully presented during the European Enlightenment.

But now in the post Holocaust era our task seems more painful than ever. After the collapse of Western humanism and the no less astonishing triumph of Western technology—success and failure so deeply intermingled we see ourselves as outsiders, or in Bilaam’s words: “Am levaded yishkon, u’bagoyim lo yitchashev”—“It is a people that shall dwell alone, and shall not be reckoned among the nations.”

If we take into account the political seclusion of the Jewish State and the bitter taste of recent clashes with the Roman Church, we can’t help but feel deeply frustrated. Chanukah, which reminds us of our victory over the Greco-Roman civilization, looks like a glimpse of a glorious past in our rather gloomy present. Or is it?

If we don’t want to yield to despair—and according to Rabbi Nachman’s famous words, despair is the last thing we are allowed to indulge in, we must try to see our present situation in a more balanced way. “Do not say that bygone days were better than ours.” (Kohelet)

We find such a sober and illuminating reassessment in Rav Hutner’s masterwork, Pachad Yitzchak. In his lectures on Chanukah he gives us in his truly inimitable style, a fresh and vigorous formulation both of our kinship with and our estrangement from the Greek path; old sayings of our Sages and philosophers are enshrined in a new and fascinating light.

In one of these lectures—the ninth—Rav Hutner brings to the fore a strange sentence of Rabbi Moshe Ben Nachman, the Ramban, in the beginning of his halachic work, sefer Milchamot Hashem. Ramban says, as if to apologize to his readers: “Everyone who studies our Talmud knows that we don’t find in our wisdom the kind of proofs found in algebra or astronomy.”

An amazing statement! Ramban seems here to point at the two young ladies carved in stone at the cathedral of Strasbourg: one, straight and triumphant, personifying Christendom and the other, bowing her head in shame and defeat, Knesset Israel. But the central point of Rav Hutner’s careful analysis is just the opposite: Ramban does not here acknowledge his inferiority, our inferiority to our Greco-Roman counterpart. On the contrary. Our supposed inferiority is actually our strength.

To make his point, Rav Hutner begins at the beginning: he contrasts the two covenants, Brit Noach, the covenant with mankind after the flood, and Brit Avraham, the covenant with our fathers and with Moshe Rabbeinu at Sinai. The first covenant is one-sided: God does not argue with Noach, but states His will. But with Brit Avraham something else happens. God argues with men. God wants to persuade and not just hold sway over His sons. And why so? To quote Rav Hutner, we are dealing here with two different types of minds: the approving mind—“da’ at maskimah”—and the creative mind—“da’ at yotzeret…”

If you will, a passive mind versus an active one. When God spoke to Noach, He simply asked for his agreement, but made no opening for a possible discussion. Conversely, when He spoke to Avraham, God called out to his creative mind, and so He did later at Sinai. With Am Israel, God leaves room for bargaining, for “masa u’mattan.” The rationale of such a distinction goes far: the purpose of the first covenant was no more than safeguarding the world. In order to safeguard it there is no need for creative thinking. (Naturally, there may be great creativity within the process of safeguarding the world). The second covenant was not intended to safeguard the regular order of things—a “minhago shel olam,” but rather to summon a new world, the world to come—“olam habah”: a new reality of life without death. Rav Hutner goes on to explain why the symbol of the first covenant, the rainbow, was already part of the world, was already given, whereas the symbol of the second covenant was a transformation of man’s reality in the flesh (brit milah).

And now, we have the clue to Ramban’s opening sentence: “Everyone studying our Talmud knows…” What does everyone know? “Everyone” should know that no proof is absolute; a proof is relative to the kind of inquiry you are involved in. Every field of human knowledge circumscribes a field of potential “proofs.” With every kind of knowledge man points to certain “facts” which are relevant, here and now. The most encompassing knowledge, as defined by the Greeks, is the “given world”—olam hazeh. The “Greek mind” basically “agrees” with the world and in doing so, remains faithful to the first covenant. The “Jewish mind,” as expressed in the Talmud, is engaged in a very different task: it has to open vistas to another world, a world which we never saw. For that reason we can’t expect to find in the Talmud the proofs we can find in algebra or astronomy. We don’t need any proof from any field of experience: we create a new field of experimentation. Our inferiority—the lack of convincing proofs—is indeed our strength!

But what then is the connection between this interpretation and the Chanukah candles? Rav Hutner explains that on Chanukah we say, “The candles (of Chanukah) are holy, we cannot use them but just look at them.” Light can be experienced in two ways: it may either serve to illuminate other objects; or light itself may be directly observed. Greek science with its demonstrable proof scorned and sought to disparage Talmudic knowledge. The antidote to this effort is the recognition that Talmudic knowledge is not a result of the present reality, but rather the source of a future reality. And the laws governing the Chanukah lights reflect this dichotomy. We are prohibited from utilizing the light as an instrument of illumination. However, we may peer into the light of the candles themselves.

In the sparkle of our tiny candles, we catch with joy and pride a glimpse of a light that “no eye could ever see,” we look at the dawn of a new and long awaited world “me-ein olam ha-ba.”

Rabbi Epstein is Professor of Jewish Philosophy and Ethics at Michlalah College for Women in Yerushalayim.

0 0 votes
Article Rating
This article was featured in the Winter 1989-90 issue of Jewish Action.