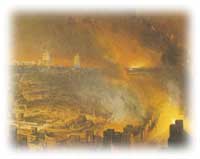 Misconception: According to rabbinic tradition, the destruction of the Second Beit Hamikdash (Temple) can be attributed solely to “sinat chinam”—gratuitous hatred.

Fact: Some rabbinic sources do, indeed, attribute the destruction to sinat chinam. But other sages have identified additional causes for this national tragedy.

As might be expected, the three cardinal sins are suggested as transgressions worthy of such a punishment. Mishnah Avot (5:8-9) states that “exile” is the consequence of “idol-worship, prohibited sexual relations, bloodshed and [neglect of] the agricultural sabbatical year (shemitat ha’aretz).”2 In a similar vein but addressing specific tragedies, the Tosefta (end of Menachot) offers the most well-known explanations for the Temples’ destructions: the First Temple was destroyed because of the idol worship, prohibited sexual relations and bloodshed that took place within it, and the Second Temple was destroyed “because they love money and each one hates his neighbor.” Note that while the Tosefta attributes the Churban to sinat chinam, it does not use the specific term. A parallel passage, however, appearing in the Yerushalmi (Yoma 1:1) and the Bavli (Yoma 9a-b), does use the familiar term “sinat chinam” in explaining the destruction of the Second Temple.3

These cardinal sins are also cited independently as having caused the destruction. Tosefta Kippurim (1:12) describes the destruction of the Second Temple resulting from an incident where one kohen killed the other while fighting for the right to work on the altar. Eichah Rabbah, in one place (Pesichta 22), attributes the destruction to rampant idolatry, and in another place (ed. Buber, p. 93), to sexual immorality, “because they were not ashamed of one another.”

But the above are the usually cited sins. Tosafot open the door to attributing the destruction to other, less well-known sins. The Talmud (Baba Mezia 30b) states that:

Tosafot (ibid, s.v. lo churva) question Rav Yochanan’s statement. “How could he claim this was the cause when the Talmud in Yoma states that sinat chinam was the reason?” The question implies that Tosafot understood Rav Yochanan to be equating the “destruction of Jerusalem” to the “destruction of the Second Temple.” Tosafot respond that the sources are complimentary rather than contradictory, and that both sins contributed to causing the destruction.

And the list goes on to identify a few more causes.

Other sources cite the neglect of Torah study as being a cause. Avot deRebbi Natan (1:2) states in the name of Shimon Hatzaddik that the sin of neglect of Torah study (bittul Torah) was the cause of numerous specific exiles, including that of the Ten Tribes and of the destruction of Jerusalem. As part of a long list of sins that led to the destruction, Eichah Rabbah (ed. Buber, 1:20, p. 92-93) states that Jerusalem was destroyed only because of the abandonment of Torah, or alternatively because they neglected the education of school children. The Talmud (Nedarim 81a) even suggests that Jerusalem was destroyed because the people did not recite Birchat HaTorah (cited in Tur 47).

There are also attempts to find explanations rooted in historical events, events possibly linked to sinat chinam or other stated wrongdoings. The best-known story is that of Kamtza and bar Kamtza.4 Essentially, the story, which appears in both the Talmud and the Midrash,5 is about a Jerusalemite who made a feast. He instructed his agent to invite his friend Kamtza. Instead, the agent invited Bar Kamtza, the host’s enemy. The host embarrassed Bar Kamtza by evicting him, despite his repeated pleadings. By means of a well-orchestrated scheme involving a mildly blemished sacrifice sent by the king, Bar Kamtza convinced the king that the Jews were rebelling, an assertion that led the king to destroy the Temple; thus it is said the Temple was destroyed over Kamtza and Bar Kamtza. “Rav Yochanan said: The diffidence of Rav Zechariah ben Eokolos [one of the rabbinic figures in the story] destroyed our Temple.”

In Gittin 58a, we find another story that attributes the destruction to an individual. The Talmud states:

It happened that a man cast his eyes on the wife of his carpentry teacher. Once his teacher required a loan. He said to [his teacher]: “Place your wife in my keep and I will lend [money] to you.” [The teacher] placed his wife in his keep, and she stayed with him three days. [The teacher] came to him and asked, “Where is my wife that I sent to you?” He replied: “I released her immediately, but I heard that some young people took advantage of her on the road.” [The teacher] asked him: “What shall I do?” He said: “If you heed me, you should divorce her.” [The teacher] said: “But her ketubah is excessive.” He replied: “I will lend you [the amount] and you will give her the ketubah.” [The teacher] divorced her and [the student] married her. When the time [for the loan] came due and he did not have enough to repay it, [the student] said: “Come and work off your debt in my service.” So they [ the student and the wife] would be sitting, eating and drinking, and [the teacher] would be standing and serving them their drinks, and his tears would fall from his eyes into their cups. It was at that moment that the [Divine] decree was sealed.

Here a single story rather than widespread corruption is blamed. However, it is unlikely that the rabbis were truly blaming the destruction on this one student; rather this story must be seen as representative of the tattered mores of the society at the time.

A broad range of explanations for the Churban continued to be offered by later authorities. Rambam offers somewhat surprising reasons in a letter to the scholars of Marseilles on the “foolishness of astrology books.”6

In it, he asserts:

This is what abolished our kingdom, destroyed our Beit Hamikdash, prolonged our exile and brought us to our present predicament.…[Our ancestors] imagined that these wisdoms [astrology books] were glorious and greatly beneficial, and they did not study warfare and land conquest.

Thus our master, the Rambam, blames our ancestors for the destruction of our Land and our Temple, because they did not study warfare and land conquest. Instead they wasted their time and relied on vanities and nothingness. Now why did he not blame them for their failure to study Torah and serve God properly? The answer must be because that alone is insufficient cause.”7 The Rambam combines two reasons that, in his view, led to the Churban: the sin of idolatry (reading astrology) and the natural consequence of not studying self-defense.

The Netziv (Ha’amek Davar, introduction to Sefer Bereishit) blames the destruction on excessive “righteousness,” that is, “righteous” individuals who treated others who did not exactly conform to their beliefs as heretics (apikorsim). This was, in actuality, a particular form of sinat chinam. The misplaced persecution of those people led to the destruction, because, the Netziv explains, God does not want this kind of excessive “righteousness,” but rather moral conduct in every day affairs.8 So too, the Chofetz Chaim views sinat chinam as the starting point for the destruction, but feels that it alone would not have caused the Churban. Rather the lashon hara (gossip) that followed was the cause of the destruction.9

In reading all of the above, one invariably faces the question of how to understand the multiple and wide-ranging rabbinic statements. What seems clear is that there is certainly an element of rebuke intended. It is understood that if a particular sin led to the destruction, observing that particular precept is the antidote that will lead to the restoration of the Temple. Ibn Ezra (Lev. 19:17) expresses this concept when he states that by observing the commandment to “Love one’s neighbor,” we will return to our Land, because this mitzvah is the opposite of sinat chinam, which is what destroyed the Second Temple. As has been demonstrated, sinat chinam is not the only offense that Chazal accuses the Jews of committing, and for a full redemption we need to rectify them all. However, because sinat chinam is such a widespread problem, it is the cause for the Churban that is most often quoted. Our prayer is that all the statements of Chazal will be taken to heart and all of the wrongdoings—sinat chinam and the other sins—will be rectified, leading to a complete and final redemption with the building of the Third, permanent Beit Hamikdash.

Rabbi Dr. Zivotofsky is on the faculty of the Brain Science Program at Bar-Ilan University in Israel.

1. Rabbi Eli Clark contributed to this article. The authors are preparing an expanded treatment of this material for publication.

2. This mishnah provides a sort of commentary to Lev. 26:22-33. Cf. Ramban to Lev. 26:16. The Mishnah apparently selected the four-mentioned transgressions because the Bible identifies these—and only these—as transgressions for which the Land will spew out its inhabitants. Regarding idol worship, see Deut. 11:17; regarding prohibited sexual relations, see Lev. 18:25, 27; regarding bloodshed, see Num. 35:34; regarding the sabbatical year, see Lev. 26:33-35. Note that the mishnah was not necessarily referring to a specific exile, but to exile as a concept.

3. Incidentally, in searching for the reason that the Second Temple was destroyed, the Tosefta’s exact wording is “Why were they exiled…?” This may imply that the concepts of “exile” and “Churban” were interchangeable to Chazal.

4. In the primary sources this story is not linked to any national sins. However, many treat it as representative of sinat chinam. The Maharal has an extensive commentary on the various Tishah B’Av aggadot (Netzach Yisrael chapter 4-8). He observes that the names Kamtza and Bar Kamtza are derived from the same root as “kemitza,” an act that denotes separating rather than uniting. He suggests that they, through their names, represent a culture that was focused on dividing rather than unifying. Cf. the Maharshah on this story, who links it to sinat chinam.

5. The familiar version of the story appears in the Babylonian Talmud (Gittin 55b-56a), but the earliest version appears in Eichah Rabbah.

5 2 votes
Article Rating
This article was featured in the Summer 2004 issue of Jewish Action.