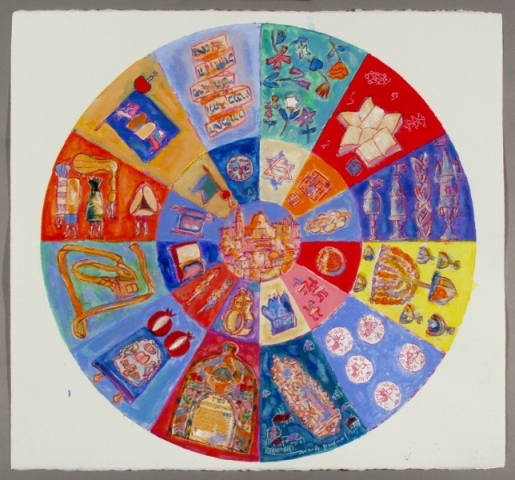 Imagine the moadim (holidays) as a circle beginning with Pesach in Nissan and ending with Purim in Adar. If the moadim were arranged in a straight line, Purim would be the furthest from Pesach. In a circle, however, Purim, the last moed, is adjacent to Pesach the first.

This juxtaposition is not incidental. The unique relationship between Purim and Pesach is alluded to in numerous places. Commenting on the famous mishnah “Mishenichnas Adar marbin besimchah, When Adar arrives, joy increases,” Rashi writes “Am Yisrael experienced days of nisim (miracles) on Purim and Pesach.” Similarly, when debating whether to celebrate Purim in the first or second month of Adar during a leap year, Chazal explain (Megillah 6) that it is preferable to celebrate it during the latter “in order to have the redemption of Purim adjacent to the redemption of Pesach.”

We will see how the unique relationship between Purim and Pesach is fundamental to fully understand both holidays.

Understanding Our Actions
In Pachad Yitzchak: Purim, Rabbi Yitzchak Hutner, zt”l, writes that one’s actions can fall into three categories: mitzvah, aveirah and devar reshut. A mitzvah is an act that produces clear and immediate kavod shamayim, sanctification of Hashem’s name while an aveirah (transgression) results in instant chillul Hashem, desecration of Hashem’s name. But how, he asks, do we classify those actions that comprise most of our daily activities, that is, activities that seem to be neither mitzvot nor aveirot?

Such seemingly neutral activities, he explains, are called divrei reshut. Many of us wrongly assume that while the Torah requires us to perform mitzvot and avoid aveirot, if an activity does not fit into either category, Hashem doesn’t care whether or not we do it. This misconception stems from a mistranslation of the word reshut to mean optional, implying that—as long as one is not engaged in a devar aveirah—one can do as he sees fit.

Mori verabi, Rabbi Aharon Schechter, shlita, explains that properly translated, the word reshut implies control or domain. Reshet means net (something that controls its contents); similarly, reshut hayachid is the private domain one controls. Thus, divrei reshut can be defined as those actions that are within our control and are presumably neither mitzvot or aveirot. But it is important to recognize that divrei reshut only appear to be neutral—our intentions and goals determine whether these actions will ultimately constitute mitzvot or aveirot. As Chovot Halevavot explains, (Sha’ar Avodat Elokim, chap. 4) “We find that all human activities, without exception, are classified as either a mitzvah or aveirah…every action is either good or bad, as Shlomo HaMelech said (Kohelet 12:14) ‘For Hashem will judge every deed—even everything hidden—whether good or evil.’”

Commenting on the verse in Kohelet, Metzudat Dovid states that “every action without exception will be judged according to the hidden motivations of the heart, be they good or evil.”

Long after the events of Purim, the Megillah demonstrates the permanence of our connection to Hakadosh Baruch Hu despite the…hester panim.

A serious Jew realizes that each aspect of his life—be it business, health or relaxation—must express his identity as a devoted servant of Hashem. What then separates divrei reshut from mitzvot or aveirot? The Pachad Yitzchak explains that with a mitzvah or an aveirah, the result—the sanctification or desecration of Hashem’s name—is produced instantaneously. Actions that constitute divrei reshut also produce either sanctification or desecration but the results of these actions emerge only retroactively, as the passage of time reveals the impact of one’s deeds upon the world.

The Mitzvot and Divrei Reshut of Hashem
The Gemara (Berachot 6a) illustrates that Hashem performs mitzvot that correspond to ours. The Gemara asks: “What is written in the tefillin of the Master of the World? Who is like your nation Israel, one people in the world.” Our tefillin contain verses describing the kavod of Hashem, and the tefillin of Hakadosh Baruch Hu contain verses proclaiming the kavod of Am Yisrael. Drawing upon this Gemara, the Pachad Yitzchak explains that the concept of Hakadosh Baruch Hu performing mitzvot refers to His interaction with the world in a way that results in an immediate revelation of the kavod of Am Yisrael (such as the miracles that occurred during Yetziat Mitzrayim).

Carrying this idea further, we can define the nature of Hakadosh Baruch Hu’s divrei reshut. Hashem constantly controls the world causing everything from monsoons in the Pacific to political chaos in Somalia. While all of these events are designed to further the mission of Am Yisrael, the relationship between a particular event and its metaphysical purpose is not always readily apparent. Often the reasons behind various world events remain hidden for centuries or even until the end of time. Thus, these seemingly random world events can be classified as God’s divrei reshut.

The Revelation of the Megillah
The Megillah (the root of which is gilui, revelation) unmasks the nature of Hashem’s hashgachah (providence) during the periods of galut when Hashem’s connection to us is described as hester panim—(the hiding of the face). A series of seemingly unrelated political and other events takes place over several years in Persia. The Megillah reveals the necessity of each event and how it generated other events, which ultimately led to the salvation of the Jewish people, the downfall of our enemies and the eventual building of the Second Temple. The snapshot of hashgachah pratit (divine providence) provided by the Megillah is meant to serve as a paradigm of Hashem’s ongoing relationship with Am Yisrael during galut. Long after the events of Purim, the Megillah demonstrates the permanence of our connection to Hakadosh Baruch Hu despite the generations of hester panim.

The Parable of the Vilna Gaon
The Vilna Gaon provides a parable for the relationship between God and the Jews in exile. A king’s only son was envied by all of the ministers because the king loved him so much. One day the son sinned against his father causing the king to exile him to the forest. The son felt that his father had abandoned and forgotten him. The king, who still loved his son, feared that his child would be hurt by wild animals or by the ministers who envied the prince. Therefore, he sent loyal agents to protect his son but asked them to ensure that the prince wouldn’t see them. One day, the son was walking in the forest and a bear tried to attack him. One of the king’s servants killed the bear. The son assumed that it was luck. Another day, one of the ministers tried to kill him. Again, one of the king’s servants saved him. Now the king’s son realized that this could not be a coincidence. He understood that it was his father’s doing, and love for his father became entrenched in his heart. He repented and returned to his father.

The Vilna Gaon explains, “Hakadosh Baruch Hu sent us into this bitter exile and was afraid that the “bears” [our enemies] would harm us so…he performs miracles for us but in a way that is hidden. However, Mordechai and Esther and the people of their generation saw and understood that these events were from Heaven and accepted the Torah with great love (Commentary on the Megillah 1:3).

Golut and Doubt
The gematria (numerical value) of Amalek, the enemy defeated on Purim, equals the gematria of safek, doubt. Exile may cause a Jew to question whether Am Yisrael is still the chosen people and to doubt that Hashem causes all world events—large and small—with a specific purpose related to Am Yisrael.

In a world of doubt, Pesach is in danger of being reduced to a quaint commemoration of a Biblical story, with little relevance to our lives. Indeed, why should we celebrate the freedom of Yetziat Mitzrayim when we are in the midst of an exile that is thousands of years long?

Purim provides the basis for celebrating Pesach in exile by revealing that the relationship between Hashem and the Jewish nation—which began with the Exodus and the receiving of Torah at Sinai—never ended. The relationship is somewhat masked by the seeming irrelevance and randomness of world events. But on Purim we unmask the world and find the hand of the Creator behind every event in history.

What Are We Laughing About?
The leitzonut (levity) of Purim is not meant to provide us with a Jewish April Fool’s Day. Instead, it encourages us to stop viewing a dictator or millionaire as an independent power and a hurricane or stock market crash as a random happening. Basking in the awareness of Hashem’s hashgachah on Purim puts even the most powerful forces in the world in their proper perspective, allowing us to laugh as we can on no other day.

The Test of a True Purim
The upcoming Pesach may seem far removed from the Exodus that occurred thousands of years ago. Yet Purim opens our eyes to the realization that the distance is no reason to despair. The relationship that began with the miracles of the Exodus grows and progresses even amidst God’s hidden state. A properly celebrated Purim rejuvenates and enlightens us. It guides us, as it did in Persia, to kiymu v’kibblu, a renewed acceptance of Torah. We leave Purim empowered with the courage and commitment necessary to devote each aspect of our lives to the fulfillment of the mission for which we were chosen on Pesach.

Rabbi Shuster is a maggid shiur at Machon Lev and lectures to various groups in Jerusalem. For an elaboration on the themes in this article, see Pachad Yitzchak: Purim, chap. ten.

1 1 vote
Article Rating
This article was featured in the Spring 2013 issue of Jewish Action.