NCSY believes it can revolutionize the way teens daven. And it published a first-of-its-kind siddur to prove it.

Conceived of and designed to inspire teenagers from across the spectrum of Torah observance, the soon-to-be released NCSY Siddur comes packed with spiritually-stirring stories, provocative questions and images. NCSY is confident the new siddur will help young people connect to the words of the tefillot, and come to value prayer more.

“The world at large struggles with using tefillah to create a relationship with Hashem,” says Rabbi Micah Greenland, international director of NCSY. “This is acutely true for teens. Schools do a good job of preparing them to navigate the siddur, but when it comes to [helping them] relate to the davening, they are in challenging territory.”

The idea for a siddur came to Debbie Stone, NCSY’s associate director of education at NCSY, a few summers ago. At the time, Stone, on The Anne Samson Jerusalem Journey (TJJ) summer program, realized the public school teens on the trip needed help understanding the meaning and the power of Jewish prayer.

She went straight to work researching the topic and putting together a creative and compelling tefillah curriculum designed for teens. She combed the works of Rabbi Samson Raphael Hirsch, Rabbi Shimon Schwab, Rabbi Avraham Yitzchak HaCohen Kook, as well as more contemporary commentators like Rabbi Lord Jonathan Sacks, selecting thoughts that would offer teens powerful insights into each prayer.

“I lived and breathed thinking about tefillah and how to present it effectively,” says Stone, who is pursuing a doctorate in education from Azrieli Graduate School of Jewish Education and Administration. “I never worked harder on anything in my life.”

Based on the number of day schools clamoring for copies of her curriculum, she accomplished her goal. NCSY realized that the publication of a siddur geared for the thoughtful teen was the next logical step.

Around the same time, Koren Publishing had been busy working on a series of siddurim appropriate for children at different stages, from kindergarten to high school. The four-part series was prompted by a vigorous discussion about tefillah at a conference of day school educators held a few years earlier. Educators openly shared their concerns about students not being sufficiently engaged in tefillah. Koren approached NCSY, known for its expertise in inspiring teenagers, with a request to collaborate on the siddur for middle school teens. That siddur became the template for the NCSY Siddur.

“The goal of tefillah education had always been teaching students the structure and text of the tefillot so that they can say the words and follow along [in school and shul],” says Dr. Daniel Rose, director of educational projects at Koren Publishers Jerusalem, and overseer of the Koren Educational Siddur series. “Tefillah is so much more than that. Our generation needs to connect to tefillah more.” 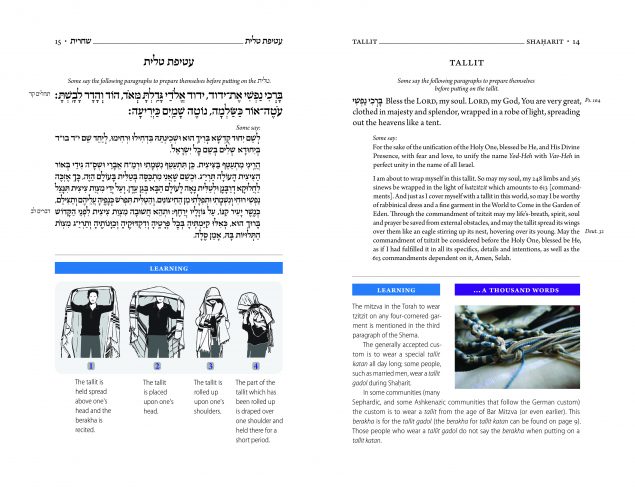 Pages of the NCSY Siddur illustrating how to put on a tallit, as well as a lesson about tzitzit.

If tefillah does not become a meaningful experience for kids and center on a cultivating a personal relationship with Hashem, Dr. Rose believes that as kids get older, their tefillah will suffer. “When they get to high school, we’ve lost them; they have no interest [in prayer].”

Dr. Rose partnered with Stone in shaping the NCSY Siddur’s commentary and design. As with other Koren siddurim, this siddur features the publisher’s attractive font, along with lots of white space, resulting in a layout that maximizes concentration. A work that has been in the making for more than two years, the siddur displays the text of the tefillot on the top of each page, and, similar to the other Koren siddurim, provides Rabbi Lord Jonathan Sacks’ eloquent translation.

Beneath the text, there are four educational components including thought-provoking questions; stories, background or historical information and images that stir the emotions and illustrate some of the themes or main concepts in the particular tefillah. The educational elements on the page are meant to serve as tools to assist educators in teaching the deeper dimensions of tefillah.

“The siddur asks the davener to be very much a part of the process of learning,” explains Stone, “with questions that encourage them to think, individually, for themselves, about what davening means to them, what their relationship with God means to them. It offers a space to self-reflect.”

Dr. Rose, a resident of Modi’in, Israel, has worked in formal and informal Jewish education for over twenty-five years, including teaching middle and high school students in England and America, as well as post-high school gap year students in Israel. He knows what makes today’s teens tick.

“We want the pages to grab them,” he says. “There’s something [throughout the siddur] for everyone.”

“If the NCSY Bencher could speak to the world in such a way that it has [thus far] sold two million copies,” says Rabbi Greenland. “I have similar aspirations for the NCSY Siddur. I think it can be a significant game changer.”

Bayla Sheva Brenner is an award-winning freelance writer and a regular contributor to Jewish Action. She can be reached at baylashevabrenner@outlook.com.