A number of years ago, in Israel, I suggested to one of the leading, older ideologues of the Hapoel Hamizrachi Kibbutz Movement the establishment of a museum dedicated to the Holocaust. I pointed out to him that the non-religious kibbutzim have excellent museums in various areas, including a number of museums dedicated to the Holocaust. In the course of our lengthy conversation, I emphasized that the Holocaust is becoming increasingly de-Judaized. A museum under religious auspices would be an important contribution to Holocaust documentation and would preserve the memory of the martyrs, their philosophy, lifestyle and values. He responded: “They, the non-religious kibbutzim, need museums, we do not. We have a synagogue, the center of our cultural lives. They have nothing.”

His response is an interesting one. It offers an explanation of why Orthodox Jews in this museum-image-oriented society are not among museum builders, but rather founders of institutions of Jewish education and magnificent synagogues. For observant Jews, a museum about Judaism is almost a contradiction in terms. Judaism is a living tradition, as is every aspect associated with it. A museum is a place where the treasures of the past are displayed. A Kiddush cup and candlesticks in a glass case in a museum are sacrilegious. They belong on a Sabbath table in a Jewish home.

In the shtetl of Ejszyszki, (Eishyshok), on the eve of the holiday of Sukkot, all of the shtetl’s old parochot were hung on the walls of the old Beit Midrash. The shtetl children were taken from parochet to parochet and told its history. There was no need for a trip to the museum. The past was an integral part of the present. In neighboring Olkenik, a most cherished possession was the “Napoleon Parochet.” During his Russian campaign, when the Emperor passed through this shtetl, he was very impressed with its magnificent wooden synagogue. As an expression of his admiration, he gave them the blanket from under his saddle. It was made into a parochet with Napoleon’s name and insignia embroidered in gold. Years later, the Museum of Saint Petersburg offered an exorbitant sum of money for the parochet. The shtetl declined the offer. A parochet’s place is in the synagogue, not in a museum. Many nights the famous “Napoleon Parochet” served as a blanket or a pillow for a homeless Jew who spent the night on a synagogue bench. For the people of Olkenik it was a more dignified usage of the parochet then being on display in the famous Saint Petersburg museum.

A Holocaust museum presents yet another dilemma: the public display of articles associated with torture and martyred death is a Christian idea. Jewish history in the diaspora is filled with tragedies like the Crusades, the Expulsion from Spain, the Chmielnitski massacres, and the catastrophes in between. Unlike Christian Europe, Jews did not build monuments to commemorate destruction and devastation and did not display articles from the martyred dead. The victims were memorialized in prayers, lamenting elegies which were incorporated into Tishah B’Av (Ninth of Av) lamentations or recited on special memorial fast days such as the 20th day of Sivan. Recently, in 1992, when commemorating the 500-year anniversary of the Expulsion from Spain, many exhibitions were mounted to mark the event. In the best Jewish tradition, they focused on spiritual accomplishments rather than death and destruction. The exhibits featured the Golden Age of Spanish Jewry, not the torture chambers of the Inquisition.

However, unlike all the other major catastrophes, the Holocaust has taken place in a secular age. Its patterns of documentation, commemoration and memorialization are, for the most part, secular in nature. They were established by secular individuals who basically followed European patterns; a combination of Christian traditions, Enlightenment models and World War I commemoration traditions honoring the fallen heroes on the European battlefields.

Among the individuals who took an active lead in these efforts were a minuscule number of trained Jewish historians, religious politicians in the Knesset and the Israeli Chief Rabbinate. Through legislation, they introduced Jewish traditional elements in Holocaust commemoration. Holocaust survivors, religious and secular, prefer traditional Jewish commemoration and memorialization of their dead. They erect traditional tombstones in Jewish cemeteries to their destroyed communities. In the Holon cemetery near Tel-Aviv, there are over 800 such tombstones. It is in the Holon cemetery, rather than in Yad Vashem, where annual memorial services are held.

In America, it was a grass-roots movement of the young which brought Yom HaShoah observances to the synagogue, and Holocaust studies to the American university campuses. As yet, none of the Jewish institutions of higher learning has taken a lead in Holocaust studies, nor in issues regarding commemoration and memorialization.

At the present, we have entered the Holocaust museum age. For the closing decade of the 20th century and the opening ones of the 21st century, museums will become the central place where the public, the media and political figures will be educated about the Holocaust. It is of paramount importance for Orthodox Jewry to reorient itself with respect to the museum concept in particular, and Holocaust studies in general, to assure that Jewish tradition and imagery will be an integral part of Holocaust museums and Holocaust studies. In an image-oriented society it is essential and urgent. 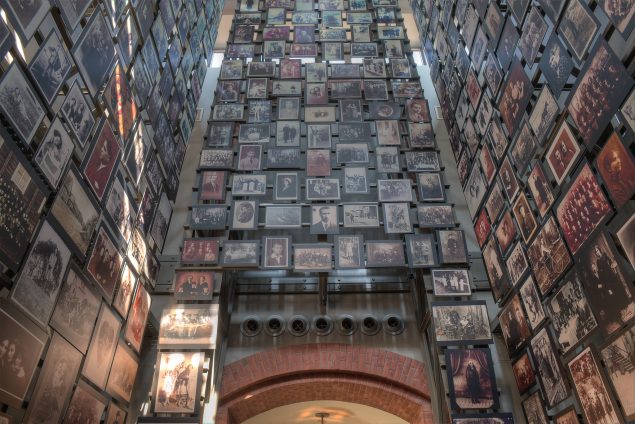 “The Tower of Faces” or “The Tower of Life” at the United States Holocaust Museum in Washington, D.C. Courtesy of Wikimedia Commons

Since 1969, I have been preoccupied with how to integrate the Holocaust within the patterns of Jewish history—how to document Jewish spiritual resistance, personalize the enormity of the loss and demonstrate the spiritual world of the victims. The result of my efforts was the first Center for Holocaust Studies in the Americas. In the Center, among others, we gathered religious memorabilia, such as a shofar used in a camp, tzitzit made and worn in Auschwitz, tefillin, mezuzot and Hebrew calendars. Among the many oral history categories a few were dedicated to observant Jews. My book, Hasidic Tales of the Holocaust, is a tribute to the Jewish spirit. Most recently, the Tower of Life was created at the United States Holocaust Memorial Museum in Washington, including over 1200 photographs from my collection.

When gathering material, any primary guidelines were Jewish history and historiography. I was constantly on guard against the possibilities of turning a Holocaust museum into a Disney World of death with its chambers of horror; not to permit a museum to be exclusively dominated by the gas chambers, the cattle car, the striped uniform, the yellow star and the book burning; to assure that the exhibit will portray the Jewish spirit: while books were indeed burning, letters were taking flight.

It was this commitment to Jewish vitality and creativity that led me to my fourteen-year research project on the shtetl of Ejszyszki (Eishyshok). The commitment was made in August of 1979 on a plane between Warsaw and Kiev. I was in the midst of a fact-finding tour to Eastern Europe as a member of President Carter’s Holocaust Commission. Our charge was to recommend to the President an appropriate memorial to the Holocaust, to be built in Washington, D.C.

During my travels to Warsaw, Treblinka, Auschwitz-Birkenau, Plaszow and other capitals of the Holocaust Kingdom, I was struck by the fact that a thousand years of vibrant Jewish life in Poland were being reduced to mere images of victimization and death. Now, as we flew over Vilna on our way to Kiev, I was aware that somewhere beneath the clouds was the shtetl of Ejszyszki, the place where I had spent the early years of my brief, interrupted childhood. One of the oldest Jewish settlements in Lithuania, Ejszyszki was founded in 1073. Among its first five Jewish settlers were my paternal ancestors.

Then and there on the plane, I decided to create my own Holocaust memorial, in the form of a written history of Ejszyszki. Rather than focusing on the forces of destruction as most memorials do, it would commemorate every aspect of the long life of that community. And though I did not then know what use I would find for such a collection, I also committed myself to gathering all the artifacts and photos I could find from the shtetl, that it might speak for itself. As one of only 29 survivors, I wanted to memorialize as many as possible of its former inhabitants, both those who emigrated, and the 3500 who remained in the shtetl and were murdered on September 25 and 26, 1941, by the Einsatzgruppen (German mobile killing squads) and their Lithuanian collaborators.

Today, 14 years later, over 1200 of my photographs are housed in a specially designed Tower at the United States Holocaust Memorial Museum in Washington, D.C. Through the photos, the Jews of Ejszyszki—people endowed with dignity, ordinary people in shul or at work, rabbis, chazzanim, family groups, children in school and at play, Jews leading a creative, normal way of life prior to the war—can reach out to the visitors of the museum. Then one realizes that all of these ordinary people came to a bitter end following Rosh Hashanah of 1941. The museum visitor identifies with people in the photos. Ejszyszki is like their own hometown in Wisconsin or Pennsylvania.

In addition to its magnificent building and exhibits, the United States Holocaust Memorial Museum has an excellent computerized learning center; the possibilities are limitless and open-ended. It is a golden opportunity to include important Jewish Holocaust material currently missing from major Holocaust books and encyclopedias. It offers a challenge to the Jewish historian and particularly to the Orthodox community.

The Holocaust is one of the most powerful experiences of the 20th century. For many Jews, it has become a secular religion. It is the strongest and most common bond they have with Judaism, stronger than Sinai and Israel. To many, the shadows of Auschwitz are brighter than the lights of Jerusalem. Death and destruction are more inspiring to them than living, dynamic Judaism. More millions are invested in Holocaust projects than in Jewish education. Many are eager to contribute to Holocaust projects since the Holocaust offers a passport to Jewish identity without any demands and obligations. The Orthodox community must have a greater input in the Holocaust Museum and Holocaust studies if it wishes to safeguard the Holocaust from becoming de-Judaized.

It is the obligation and responsibility of the Jewish scholar and community to document the Holocaust with accuracy and dignity, to record the Jewish values and traditions by which many victims lived and died. Their input in Holocaust studies and Holocaust museums will help create a more balanced approach between Auschwitz and Jerusalem, between destruction and a living, creative Judaism. We are the last generation that can prevent the Holocaust from becoming de-Judaized, and we can be instrumental in incorporating it within Jewish history and tradition.

My wise and older colleague from the Religious Kibbutz Movement misunderstood the dynamics of our time. The synagogue and the museum are not mutually exclusive of each other. Centuries-old Jewish values and traditions must be included in Holocaust museums, both for the memory of the dead and for the sake of the living.

Dr. Eliach, Professor of History and Literature, is a Broeklundian Professor of Judaic Studies at Brooklyn College (NY). She is the founder of the Center for Holocaust Studies, Documentation and Research, and was its volunteer Director until 1990, when the Center merged with the Museum of the Jewish Heritage. She is the author of two books and numerous articles on the Holocaust. Her newest book, which will be about the 900-year history of Ejszyszki-Eishyshok, will be published by Little Brown.

0 0 votes
Article Rating
This article was featured in the Fall 1993 issue of Jewish Action.