While a good percentage of Orthodox high school graduates flock to the Holy Land each fall, there are tens of thousands more who don’t even care to go.

Masa Israel Journey is helping to change that.

“I didn’t see much value in spending a year in Israel,” says Sarah Alt, eighteen, who attended public high school in Buffalo, New York. “I figured it was just a year to hang out.” She planned instead to study music at Buffalo State University. Alt was involved with NCSY, the Orthodox Union’s phenomenally successful youth movement. NCSY advisors in her region convinced her that the year in Israel was something definitely worth her time. Although still wary, she went, thanks to the support she received from Masa Israel Journey. “I was so nervous getting on the plane,” she says. “I was like—what am I doing? I don’t like learning!” After her year at Machon Maayan, she changed her tune. “I just loved seeing the country,” she says. “I gained a great love for learning, for Israel, for my fellow Jew, and for what it means to be a Jew.”

Established by the government of Israel and the Jewish Agency for Israel in 2003, Masa Israel Journey enables Jews from all over the world to spend a semester to a year in Israel. Open to those ages eighteen to thirty, Masa Israel Journey, which is also supported by the United Jewish Communities of North America and the Keren Hayesod around the world, helps fund students’ tuition at any one of 200 long-term programs in Israel, fifty of which are Orthodox. Its goal in a nutshell: to ensure that Jews all over the world build a lasting relationship with Israel, have a strong Jewish identity, and gain meaningful and beneficial experiences in Israel. “We were looking to expand on the ten-day Birthright Israel concept,” says Avi Rubel, Masa’s director of North American operations. “Many young people would return after having an extraordinary ‘wake-up moment’ in Israel, but the impact of a longer experience lasts a lifetime.” 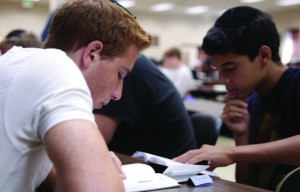 Two students learning at one of the Masa-accredited programs in Israel. Masa funds fifty Orthodox-run programs in the Jewish state.

Esther Tsvaygenbaum is a case in point. “I absolutely fell in love with Israel,” says Tsvaygenbaum, eighteen, from Albany, New York. A former NCSY chapter president, Tsvaygenbaum grew up in a non-observant home. Her dream after finishing high school was to learn in Israel, but her parents were set on her going to Juilliard. “We really couldn’t afford my going to Israel for the year,” she says. But then she heard about Masa Israel Journey. “They made it so easy,” says Tsvaygenbaum. “They really want students to experience the magic and beauty of what Israel has to offer. There’s no question that I’m going to be living there; I only want to raise my children in Israel.”

“There are NCSYers who would absolutely not be studying in Israel today without Masa’s help.”

Masa-accredited programs include Torah institutions for men and women as well as other initiatives catering to a variety of interests including sports, academia, volunteer work and the arts.

Thanks to Masa Israel Journey, the demographic of young Israel-goers is rapidly expanding. In the Orthodox world, spending a year studying in Israel is almost a rite of passage. This was not so in the non-Orthodox world. Until recently. According to Rubel, the year before the program’s launching in 2003, between 3,000 to 4,000 young people attended long-term programs in Israel, 40 percent of whom were young adults attending Orthodox seminary or yeshivah programs. This academic year, the relative proportion of Orthodox Israel-goers dropped to 38 percent. “What is happening is that the numbers in the Orthodox community are staying the same, but the relative percentage is going down as other parts of the community begin to embrace this idea,” says Rubel. “We are learning from the Orthodox community and making a year in Israel the norm for the rest of the Jewish world.”

Masa Israel Journey offers every undergraduate student a grant of $1,000; post-college participants (ages twenty-one and older) receive grants ranging from $3,000 to $4,500, depending on the length of their stay. For the 2010-2011 academic year, 80 percent of Masa’s $47 million budget went toward participants’ scholarships and grants. The balance covers the student tours and Masa Leadership Seminars, among other extra-curricular programming offered to participants throughout their stay in Israel. Masa Israel Journey also offers need-based scholarships, determined by the participant’s financial need and the length of the program. Those who qualify can receive up to an additional $3,000 in scholarship money.

Since Masa’s founding, the number of participants has nearly tripled. This past September, 10,400 young people, many of whom are NCSYers, participated in Masa-accredited programs.

Many Masa programs also offer college credits. NCSY’s “Israel Experience” is one such program. Launched in 2008 by the OU and Bar-Ilan University, Israel Experience combines university classes in one of Israel’s top universities with an extramural program incorporating NCSY-style trips and activities.

Rabbi Steven Burg, international director of NCSY, considers Masa Israel Journey to be an invaluable partner. “Our missions are totally aligned—to get as many adolescents as possible to study in Israel during their college or post-college years,” says Rabbi Burg. “They do it through funding and helping to create new programs. There are NCSYers who would absolutely not be studying in Israel today without Masa’s help.” Masa and NCSY work together to get as many students as possible to study in Israel.