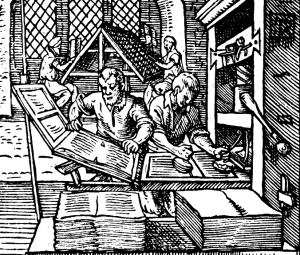 A woodcut from 1568. The printer on the left is removing a page while the other one inks the text-blocks. Courtesy of Wikimedia Commons

Jewish women played a prominent role in the world of Hebrew books from the very dawn of printing. Their contributions to the production of Hebrew books and typography have been noted in numerous scholarly articles. While historically speaking women were usually limited to low-paying menial jobs in printing houses, such as folding printed sheets and sewing bindings, in the world of Hebrew printing Jewish women owned printing shops, set type and financed the cost of printing for worthy authors. The famed bibliographer Avraham Yaari lists 186 women, both Jewish and non-Jewish, who were involved in the printing of Hebrew books from 1477 until 1958.

The first Hebrew books we know of were printed around the year 1475. Two years later, a woman by the name of Estellina, the wife of the physician Avraham ben Shlomo, played a prominent role in the printing of the book Bechinat Olam in Mantua, Italy. An ethical work, Bechinat Olam was written in Hebrew by Yedaya HaBedersi, the thirteenth-century physician, poet and philosopher.

An Israeli postage stamp honoring Doña Gracia Mendes (1510–1569), a leader of the Sephardi Diaspora, who escaped with her daughter Reyna from Inquisition-ruled Europe to the relative safety of the Ottoman Empire. Doña Gracia’s portrait is from a medal minted in Ferrara, Italy around 1551. Courtesy of Eli Genauer

DOÑA REYNA MENDES: CONSTANTINOPLE
Some of the earliest Hebrew books were printed in Constantinople. At the time, all the printing houses were owned by men except for one, which was run by Doña Reyna Mendes (c. 1539-1599).

Descended from one of the most prominent Jewish families, Doña Reyna Mendes was the daughter of one of the most extraordinary women of her day, Doña Gracia Mendes. Due to Doña Gracia’s extreme wealth and political connections, she was able to escape along with her daughter from Inquisition-ruled Europe to the relative safety of the Ottoman Empire. Reyna then married Joseph Nasi, an advisor to the Sultan. When her husband died in 1593, the Sultan confiscated his wealth, leaving Reyna only with the 90,000 dinar of her ketubah. She decided to devote the remaining funds to promote Jewish learning. She established a press near Constantinople, which operated for two years; subsequently, she started another press in 1596 in a suburb of Constantinople. In these two shops she published fifteen books, including a commentary on Bereishit by Rabbi Moshe Alshich, a Ladino translation of the book Yichus Hatzaddikim and Masechet Ketubot of the Babylonian Talmud. After Reyna’s death in 1599, her printing shops ceased to function, resulting in a major loss for the world of Hebrew publishing.

RABBANIT YEHUDIT ROSANES: LEMBERG
Another woman famous for her involvement in the production of Hebrew books was Rabbanit Yehudit Rosanes. Married to the rabbi of Lemberg, Yehudit produced Hebrew books from 1782 to 1805, first in Zolkiew (now in western Ukraine) and afterwards in Lemberg (Lvov), an important center for the printing of Hebrew books in the nineteenth century.

Avraham Yaari writes that even though there were female printers before Yehudit, she was the first female printer who engaged in the work on a commercial basis. A true pioneer, Yehudit charged authors money to print their books, and printed popular books that she knew would sell well. She printed over fifty books, and at certain points she employed twenty-four typesetters in her printing operation. Her printing house existed for at least twenty-five years, longer than any of her predecessors. Among the books she printed were two editions of Ketzot HaChoshen; Talmud Torah by Rav Shneur Zalman of Liadi; and two editions of Tzenah U’rena. The title page of one of her books contained the following line: “In the print shop of the wealthy woman, Rabbanit Yehudit, wife of the great scholar Tzvi Hirsch, head of the Beit Din of Lvov.” 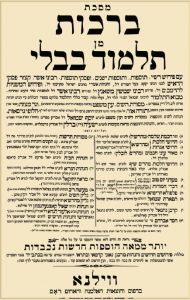 Title page of the Vilna Shas, Masechet Berachot, printed in 1880. The last line on the page states that the volume was printed by “the Widow and the Brothers Romm.” Courtesy of HebrewBooks.org.

DEVORAH ROMM: VILNA
Perhaps the most famous female print shop owner was Devorah Romm. The Romm printing shop began in 1799 and continued printing until 1940, when the Russians invaded Vilna during World War II. But the printing house truly flourished under Devorah’s guidance. Devorah’s husband, David, owned a printing press in Vilna, but he died when she was only twenty-nine. She was left with six children including one from David’s first marriage. She took over the shop in 1863 and ran it until her death in 1903. Devorah was the main owner along with her deceased husband’s brothers. Devorah owned 40 per cent of the printing plant and her two brothers-in-law each owned 30 per cent. The press, which became known as “the Press of the Widow and the Brothers Romm,” printed thousands of titles during that forty-year period, the most famous of which is the universally acclaimed Vilna Shas. The Shas was a landmark event in the annals of Hebrew publishing. A monumental effort on the part of Devorah, the Romm edition of the Talmud, which took six years to complete, included numerous commentaries printed for the first time from manuscripts as well as other commentaries, and became a model for all subsequent editions of the Talmud from any printing house. Writing about Devorah, the bibliographer Avraham Habermann stated: “Only because of the superior intelligence of Devorah Romm was this print shop able to reach unparalleled heights and make an eternal name for itself.”

Jewish women involved in Hebrew printing in its early years, such as Devorah, exhibited remarkable strength, intelligence and acumen, having the foresight and vision to understand the potential the invention of the printing press held for the world of Torah study.

In addition to the women who ran printing houses, there were also those who used their resources to finance the publication of important Hebrew books. One such woman was Eidel, the daughter of Rabbi Yeshaya Menachem Mendel of Prague. In 1665, she underwrote the publication of a book of selichot in Cracow. For her efforts, she merited a mention in the sefer: “A woman who should be remembered for good, the wise, scholarly, wealthy and pious Eidel . . . who did not scrimp with her money to benefit the public through the printing of this book of selichot.”

ELLA: DESSAU
One of the most compelling women in the history of Hebrew printing was not really a woman at all; it was a young girl by the name of Ella. The daughter of Moshe ben Avraham, Ella worked as a typesetter in her father’s print shop in Dessau, Germany. We first meet her in 1696 when she is only nine years old and learning the printing business. The only girl in a large family that had emigrated from Holland to Germany, Ella and her siblings assisted in the arduous task of typesetting and printing important Jewish books used throughout Northern Europe. Ella was obviously literate in both Hebrew and Yiddish. In 1696, Ella and her brother worked on typesetting the siddur Drash Moshe. How do we know of Ella’s existence? After stating in the colophon that the siddur was set to type by Yisroel ben Moshe, Ella writes a poem, providing us with delicious details about her life: 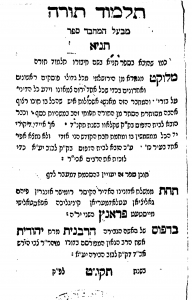 Title page of the sefer Talmud Torah by Rabbi Schneur Zalman of Liadi, printed in 1799. The name of the owner of the printing house, Rabbanit Yehudit, wife of Rabbi Tzvi Hirsch of Lublin, is listed in large letters towards the bottom. Courtesy of HebrewBooks.org.

The poem, translated from the Yiddish, reads as follows:

The Yiddish letters I set with my own hand
I am Ella, the daughter of Moses from Holland
a mere nine years old
the sole girl among six children
So when an error you should find
Remember, this was set by one who is but a child

We meet Ella again in 1699; this time as a typesetter working on the famous Berman Shas of Frankfurt an der Oder. This printed edition of the Talmud (1697-1699) was financed by the wealthy court Jew, Yissachar Berman Segal of Halberstadt, who donated half of the 5,000 printed copies to needy scholars throughout Europe. In the colophon at the end of Masechet Niddah, Ella gives herself well-deserved credit: By the hands of the worker in this holy work, the typesetter, Yisrael the son of Moshe. And by the hands of the maiden Ella, daughter of Moshe.

The colophon concludes with a verse with oversized letters that add up to the year of publication, the standard style used by printers. Generally, printers would choose verses that have some relevance to the specific work. However in this case, the verse appears to be unrelated to the work. It states, in the year of “Nekeivah tisoveiv gever, when the woman will court the man” (Jeremiah 31:21), adding up to (5)459, corresponding to the year 1699. The complete verse as it appears in the colophon reads: “For Hashem has created something new on the earth, that the woman will court the man.” The verse refers to a time when women will seek out men, metaphorically alluding to Knesset Yisrael, portrayed as a woman, seeking out Hashem.

Perhaps the typesetters deliberately included the verse “for Hashem has created something new on earth,” alluding to Ella’s highly unusual position, and the fact that her work represented a different role for women in the dissemination of Jewish knowledge.

GITEL: PRAGUE
Finally, we want to mention Gitel from the city of Prague. In a book published by Rav Yitzchok ben Shmuel HaLevi, entitled Siach Yitzchak, the colophon informs us that the sefer was typeset by Yehuda ben Alexander Katz, also known as Leib Zetzer Katz, as well as by his daughter, Gitel. It includes the highly unusual statement, obviously written by Gitel herself: “V’gam ani oseh b’melechet haShamayim, And I also was involved in producing this work of Heaven.” The enlarged letters add up to (5)388, corresponding to 1628. Gitel, like so many of her peers involved in printing Hebrew works, clearly saw herself as a vital partner in this holy endeavor.

An etching of printers hard at work, circa 1770. Courtesy of Wikimedia Commons

Many of the women involved in Hebrew printing had a sense of the historic role they were playing, and understood they were taking part in a revolution that would dramatically alter the way Jews pray, study and live. These pious and holy women, some of whom were highly educated and knowledgeable themselves, were pioneers helping to pave a new path for Jewish learning and scholarship.

Eli Genauer is a collector of old Hebrew books. He has written extensively on his collection with his articles appearing in Jewish Action, Hakirah and online in the Seforim Blog.