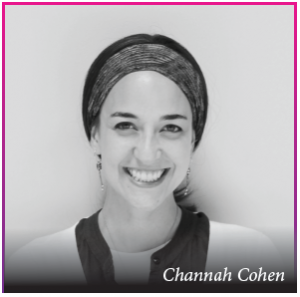 Working for the Heshe & Harriet Seif Jewish Learning Initiative on Campus (OU-JLIC), Channah Cohen serves as a Torah educator at Queens College in New York. In this role, she gives shiurim and organizes programs and events while serving as a role model for Orthodox women on campus. An alumna of Tomer Devorah Seminary and a graduate of Stern College for Women, Channah completed a master’s in adult learning & leadership at Teachers College, Columbia University. She lives in Passaic, New Jersey with her husband, Jeff, and their son, Aryeh.

Oh, sure, I knew all about leadership. I knew that the trait theory was passé and would turn up ludicrous hypotheses; for instance, that through studying Napoleon and Caesar one can deduce that great leaders must be left-handed and shorter than 5’4”. I knew that the difference between good leaders and good managers lay in asking “how” versus asking “why.” I even had a master’s in adult learning and leadership to boot. So yeah, I knew all about leadership.

Until I became a leader.

When I started working for OU-JLIC on the Queens College campus in the fall of 2015, things weren’t quite as I expected they would be. I spent the entire first semester on campus in absolute shock. Here’s some of what I learned about leadership—and about myself—along the way.

Lesson One: The only characteristics that research studies have successfully correlated to effective leadership are not charisma, extroversion or even intelligence; they are humility and perseverance. Humility is the ability to work as a team and to give credit to others. Perseverance is the ability to fail—repeatedly—and to try again.

I learned this lesson from the leadership of OU-JLIC, an incredible organization both on the national and campus levels. Its leadership isn’t composed of loud, charismatic, bombastic personalities; rather, they are quiet, thought-out, passionate individuals. At our biannual conference, the national staff spends five minutes patting us on the back for our work and countless hours making sure that we are acutely aware of our responsibility to our students, and as well-equipped as possible to handle the various challenges we face. Humility is their most blatant characteristic, but it’s coupled with traits that are often overlooked in the literature on leadership  and that are, in my opinion, integral: the caring and the passion to affect others in a positive way.

I’ve witnessed these same qualities in the OU-JLIC staff on my campus (and that of every other campus that I’ve interacted with). They don’t expect me to be perfect at teaching or running events. In the hours we spend planning every detail of every event we run, reviewing later what worked and what didn’t, and taking most seriously an event that belly-flopped, the staff has taught me that mistakes are human, but that we care enough to improve for next time. It isn’t about having the “right” opinions on how to do things best, it’s about asking questions to one another, to the students, to those who have done this before us. Humility and perseverance.

Lesson Two: The extraordinary power of a woman in a leadership position. At the risk of being controversial, I don’t usually put many women on the list of great historical leaders that I try to learn from and emulate. I’ve read the biographies of Abraham Lincoln and Benjamin Franklin. I’ve studied the Biblical personalities of Jeremiah and Moses. In graduate school, women flitted in and out of leadership classes, but men had center-stage.

On campus, I’ve seen what a woman in a leadership position can do. Naturally, women have a balancing act between work life and home life that’s more difficult and complex than that of men.

But I’m surprised again and again at how the skills I work on in my home life as a wife and mother—organization, patience and the ability to validate and reflect emotions—play out at work. I’ve been shocked at how often just sitting across from a student and listening to her, holding her moral debate in my hands, has given her the small amount of courage that she needed to make a real change. I distinctly recall numerous conversations that progressed as follows: a student tells me about a relationship she has with a young man she knows is not right for her but she’s too afraid to break up. I listen, I validate and I reflect back the dreams of the young woman. She checks her watch and rushes off to class. Within a few days, she calls to tell me she ended the malignant relationship, and I am surprised every time.

Another example: A student insists that she does not want to get involved in Jewish programming on campus. What’s more, she wants to change her name and befriend only non-Jews who don’t know her. I listen; I try to hear her motivation. I say goodbye after our meeting, sighing heavily, certain that I will never see her again. Surprisingly, I receive several e-mails from her requesting information on upcoming events. I see her at several programs. Speaking with her and accepting her must have enabled her to believe in and accept herself.

Before I started working for OU-JLIC, I thought it was jejune to say that what students really need is “someone to listen.” But after a semester on the job, I understand that what students need most really is someone to listen, to reflect, to validate. And I learned, to my surprise, that being a woman gives me a special capacity to provide a quiet, encouraging and compassionate form of leadership. I think of myself as a “leader in the middle”: I’m not a distant, charismatic, pontificating rabble-rouser who is going to change political structures. But I am a woman leader who can use her innate characteristics to effect real, lasting change on an individual level.

Lesson Three: Making an impact is not the most difficult task.

I have listened to the life stories, the hopes, the dreams and the challenges of my students. And in only one semester on campus, I have been blown away by the heroism of my students. I have spoken to students who are struggling with mental disorders that make daily living a battle. I have spoken with students who have combatted physical disabilities and have fought their way to independence. I have spoken with students who are fighting chronic diseases, or dealing with perpetual rehabilitation, and need to take life one day at a time. And it has taught me that as a society, we have a definite affinity to the glorious halo that surrounds leaders, instead of learning about the quiet inner strength of the people that are all around us. And having been inspired so often by my students, I believe society might be missing out . . . big-time.

This first semester as a Torah educator on campus has been an eye-opening one for me. I did not realize how myopic my view of leadership was until I was introduced to leaders who are both humble and perseverant, actively working to positively impact the Jewish community. I found my place as a woman leader, a leader in the middle between the community and the distant figures we read about in history books. I have learned infinitely more from the discreet, private conversations I have had with real-life student heroes than I did from bombastic, egoistic lecturers on leadership in graduate school. Perhaps if I can continue to learn from my students and others around me, in a few decades I will be the kind of humble, perseverant leader that our community always needs.

5 2 votes
Article Rating
This article was featured in the Summer 2016 issue of Jewish Action.