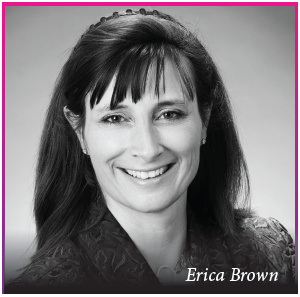 Dr. Erica Brown is an educator and author who consults for non-profits and serves as the community scholar for The Jewish Center in Manhattan. She was the scholar-in-residence for the Jewish Federation of Greater Washington, where she directed the Jewish Leadership Institute. She also held that position at the Combined Jewish Philanthropies. Erica was a Jerusalem Fellow, is a faculty member of the Wexner Foundation, an Avi Chai Fellow, and winner of the Ted Farber Professional Excellence Award. Erica, the author of ten books, has degrees from Yeshiva University, University of London, Harvard University and Baltimore Hebrew University. She lectures and writes widely on subjects of Jewish interest and leadership and lives with her husband and children in Silver Spring, Maryland.

When I had been in the field of Jewish communal service for twenty-five years, I was asked to give the commencement address to the Hornstein Jewish Professional Leadership Program’s class of graduates at Brandeis University. It was a great honor. I observed at the time that when I entered the field [of Jewish communal service], the Berlin Wall was still up, Nelson Mandela was still in prison and the Former Soviet Union was not yet former. No one could have imagined a 9/11. There had been no Hurricane Katrina, no tsunami on the other side of the world and no earthquake in Haiti. We knew nothing about genocide in Darfur. We never had a black president. There were no e-mails. There was no Internet, and friend was still a noun. The world has changed so much.

The field of Jewish communal service has also changed. Professionals were better educated and had more mentoring; our first “Training School for Jewish Social Work” opened in 1922 and morphed into the Graduate School for Jewish Social Work to create a Jewish civil service ten years later. In the 60s, Bernie Reisman created a program in Jewish communal service at Brandeis. Several universities have followed suit.

I “fell” into the field of Jewish adult education twenty-eight years ago. I applied to teach Jewish studies in an Orthodox Jewish day school. The principal wanted to know the street I lived on, what my husband did for a living and if I covered my hair (it was covered at the time). There were no questions asked about my educational background, my teaching aspirations or my goals in a classroom. Those who interviewed me were not comfortable that I was interested in teaching both Tanach and Gemara. They were not sure what to do with me. I did not get the job.

This led to a happy accident. A few weeks later I was asked to apply to be a Judaic studies tutor for an adult education program run by the Melton Center for Jewish Education out of Hebrew University. Thus began my life-long obsession with adult education; this is almost too broad an age range, from eighteen onwards, with all of the developmental divisions this implies. The adult classroom felt safer, more open, and more adaptive to the kind of work that deeply interested me. Fascinated by adult development and maturation, by transformative adult experiences and by organizational structures and their leadership, I’ve had the good fortune to explore all of these arenas in my work. And I have a very old-fashioned high school principal to thank for rejecting me. 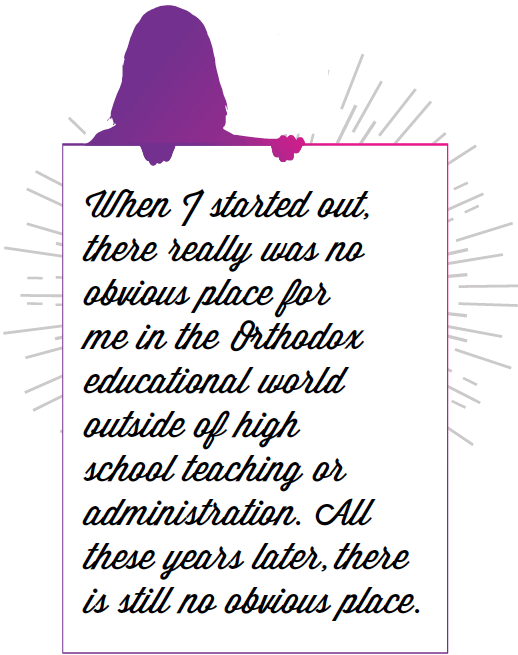 This growth and professionalization of Jewish communal life led me to believe that possibilities were endless. I also felt that working on behalf of the Jewish community at large took me out of the echo chamber of Orthodoxy and helped me appreciate that Jews showed their commitment to our people not only through the lens of halachah but also through philanthropy, community organizing, social services and social justice. In my eighteen years of serving as a scholar-in-residence at two federations, I dreamt that one day all 155 federations in North America (now 151) would also have scholar-in-residence positions, creating a natural home for Jewish education to influence philanthropy and communal planning and a good place for learned Orthodox women. That dream stalled; there are very few federations with such positions, less than a handful. The Jewish renaissance of learning, never out of fashion in the Orthodox community, cycles in and out of popularity in the organized Jewish community. I believe, sadly, we are now at an all-time low in providing high-quality, low-barrier adult education services to the broader community.

Although I do a great deal of volunteer teaching in my local community, the bulk of my work has always been outside of the Orthodox community. When I started out, there really was no obvious place for me in the Orthodox educational world outside of high school teaching or administration. All these years later, there is still no obvious place. While I almost always write my own job description—not neatly fitting into existing frameworks—I think you can only do that for so long before fatigue sets in. It’s kind of crazy to have this conversation in virtually every workplace:

“What should we call you?”

Today, I do not advise young women to follow my path. It’s too hard. It’s too risky. Even now. In your professional life, your business card should make sense; it should not always require an explanation. The Orthodox community—if there is such a construct—is too unclear about a woman’s role in the spiritual arena that if you add the overlay of a professional role, the confusion mounts. The pay discrepancies between men and women in the Orthodox community and the range of high-profile educational, administrative and spiritually edifying positions are too limiting. It’s critical to be in a supportive professional setting where you don’t have to battle the surrounding culture to find worth and validation. For me, a satisfying job should not be a minefield, a battlefield or a political statement. In the Orthodox world for women, it has often been this. Work should be a place where your skills, talents and passion match the mission of the organization and not where you feel yourself under glass, observed and scrutinized to see if your gender will seep through and become a question mark.

The Orthodox community, of necessity, has begun to understand that women need to have a more visible, more influential role, even if that role is still a mystery. But if it is to be significant, then large Orthodox communal organizations need to spend less time hopelessly catching up with the rest of the world on gender issues and spend more time analyzing and forecasting current needs and demands. In the meantime, please don’t ask women to be the token figure on a panel of men or think it’s a compliment to ask women to lecture or be scholars-in-residence because they are women. Invite women to your schools and shuls because they have something important to say, just like anyone else. Biology does not trump intelligence.

There is an important flip side for me. Among my friends who are generally happy with their professional choices, there are also the less happy ones: the recovering lawyers, the doctors disgruntled about changes in healthcare and the struggling non-profit employees. I, on the other hand, engage in work that provides me with a profound sense of meaning and purpose. My lack of a formal, local home at times also fuels my writing, creating a larger platform for ideas. I feel I have chosen a noble and sacred career, even if, at times, I have trouble describing it.

5 1 vote
Article Rating
This article was featured in the Summer 2016 issue of Jewish Action.