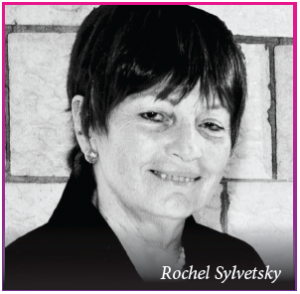 Rochel Sylvetsky is currently op-ed and Judaism editor of Arutz Sheva’s English site. She served as chairperson of Emunah Israel from 1991 to 1996, CEO/director of Kfar Hanoar Hadati youth village, a member of the Emek Zevulun Regional Council and a member of the Religious Education Council of Israel’s Education Ministry. She also served as managing editor of Arutz Sheva. She holds degrees in mathematics and Jewish education.

My beloved high school Navi teacher, Rabbi Ebstein, z”l, a survivor who tried hard to make the messages of the ancient prophets relevant to our Beth Jacob Esther Schoenfeld high school senior class, would often ask us: “What is the reason you are in this world?”

Moving to Israel in 1971 as a young mother of two brought Rabbi Ebstein’s question to mind in a different context as there were—and are—so many pressing needs in this beloved Land that provided a reason for being in this world. Life was economically difficult for many of the immigrant families from Middle Eastern countries living in the small town we came to at first, and the euphoria of the Six-Day War was tempered with worry about sons in uniform, as it still is. To these families, we seemed like well-off Americans and we were lucky to have close family in Israel, but it was not easy. For months our kindergarten-age son cried every night that no one understood him; we had to travel by bike, as there were only a few buses a day (and our car took months to arrive); and we had to deal with an unfamiliar bureaucracy and look for a permanent home and jobs in a much-less developed Israel.

It was wonderful, though, because those same immigrant families really welcomed us, inviting us to their homes even though they had much less than we Americans did; and I just loved teaching my major, math, to the daughters of immigrants from Morocco, Tunisia, Iraq, Yemen and other countries, as well as to those whose families had been in Israel for generations. I felt I was doing my part to put these young women on the road to success. So I spent hours every night memorizing theorems, mathematical expressions and how to do even simple arithmetic in Hebrew, inviting my students to our tiny absorption center apartment for one-on-one tutoring and fun.

Shortly afterwards, I was asked to travel to development towns under the aegis of Hebrew University to give workshops on improving teaching. Subsequently, we moved to Beit El with the first fifteen families who founded it, living in a caravan in an army camp for a year, and helped establish the yeshivah there.

Once my three children were older, I was elected chairperson of Emunah Israel. There was, of course, the public aspect of the position, which necessitated representing Religious Zionist women in the media and at various Knesset committees. However, I derived true gratification from working with the organization’s children’s homes, which put at-risk youngsters of all ages on the right track. 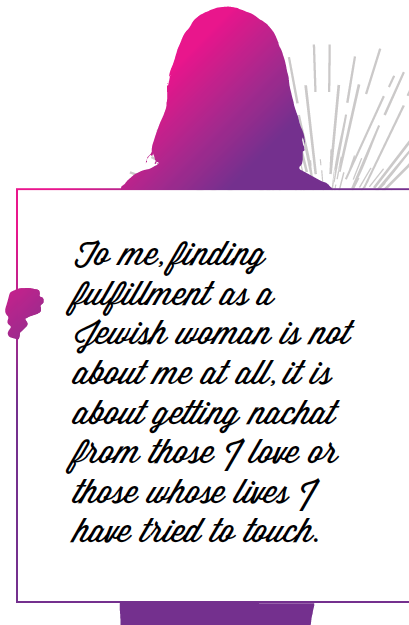 Soon after, as a member of the Religious Education Council of Israel’s Education Ministry, I was asked by the Ministry to head a youth village, Kfar Hanoar Hadati, for 500 at-risk teenagers in northern Israel. A youth village is a facility staffed by counselors and social workers, based on a holistic educational concept for dealing with at-risk youngsters. The young people live in the village and study for matriculation in the village’s high school, but also have much of the responsibility for running the village. In our case, that meant kitchen duty, gardening, milking the cows at the village’s therapeutic farm and turning the olive crop into oil in our small but modern olive press, as well as enjoying extra-curricular sports, choir, swimming, carpentry, et cetera.

The difficult backgrounds of the students made this a 24/7 challenge. I was the first woman elected to run a religious youth village in Israel, but my (newly retired) husband and I fell in love with those young people, said “yes,” and stayed there for seven years.

Trying to find ways for these at-risk teens to experience the strength that Yiddishkeit could provide them, I founded the first yeshivah (Nachalat Yisrael) and Torah Umadda program in any youth village. I hired a graduate of Yeshivat Hesder HaGolan in Hispin, who had immigrated from Ethiopia as a youngster, to serve as rabbi of the youth village.  The dedicated roshei yeshivot attracted students from all over Israel, giving these troubled youth the opportunity to learn about observant life from their peer group, while giving the new students a lesson in ahavat Yisrael. Informal activities and chores, including pot-scrubbing, broke down barriers—as did the hours my husband spent teaching motivated Ethiopian and Russian boys to lead the Minchah and Ma’ariv prayers.

Our home was open to our students day and night, and there were constant crises to deal with, but it was also the only home for the thirty-odd orphaned Russian teenagers who had no families to go to during summer vacation. For holidays, we found adoptive families for them, including our own. Sixteen-year-old Ina and her eighteen-year-old brother Leonid seemed to want to connect to Yiddishkeit when we took them to our Jerusalem home for the yamim tovim, so we made them part of our family. Their mother, a nurse, had died when they were young children. Today, Ina, a nurse like her mother, is married to a ben Torah and has four children of her own. Leonid, now Arye, went on to yeshivah gavohah and married a lovely Israeli girl. At Ina’s wedding, her new father-in-law told us that he had known Ina’s grandparents in Odessa, where he is from—she had not known them or any details about them! Apparently, her grandparents had a secret shul in their house to which Ina’s father-in-law had been brought as a child so he would see a tallit and say Shema. (Rabbi Ebstein, my beloved high school Navi teacher, are you listening? Is being a part of that story—bringing the grandchildren of someone who had a secret shul in Odessa back to the fold in Eretz Yisrael—one of the reasons for being in this world?) 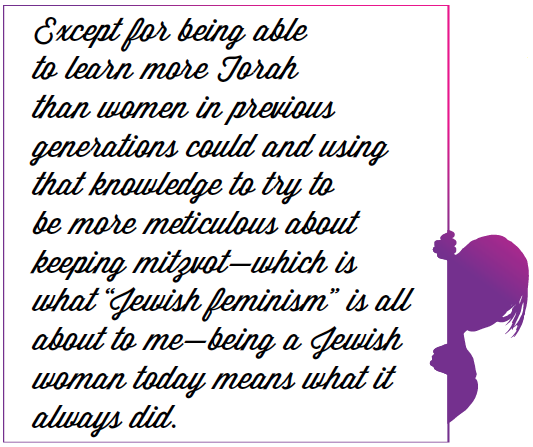 Running the village entailed significant challenges—from convincing the Education Ministry to fund the laser removal of crosses tattooed on Ethiopian girls’ foreheads to taking girls to the mikvah as part of their conversion. I will never forget when the dayanim (judges) asked Tamar, “Why do you want to be a Jew and suffer from anti-Semitism?” and this motherless girl whom I loved, with her head held high, said “Ki ani bacharti, because that is what I have chosen.” Alex, whose father had been Jewish, changed his name to David when he converted at sixteen, announcing that he wanted the name of a brave Jewish king, his own bravery coming to the fore in the IDF commando force he later volunteered to join. Sweet Maria converted and became Moriya, and Yana’s paternal grandmother, who was affiliated with Chabad, called us up in joyous tears the first Friday after Yana’s conversion to thank us for being able to light Shabbat candles together with her now-Jewish granddaughter.

Upon my retirement as village director, Arutz Sheva asked me to be managing editor of its English site, and I accepted the challenge of helping to bring the truth about Israel to a global audience. Today, I am editor of Arutz Sheva’s op-ed and Judaism sections as well as deputy editor of the magazine of the Religious Zionists of America, The Jewish Word.

To me, finding fulfillment as a Jewish woman is not about me at all, it is about getting nachat from those I love or those whose lives I have tried to touch. Except for being able to learn more Torah than women in previous generations could and using that knowledge to try to be more meticulous about keeping mitzvot—which is what “Jewish feminism” is all about to me—being a Jewish woman today means what it always did. Today it is possible for women to pursue careers of their choice, but that is an historical development, not a Jewish one. Being the cornerstone of the family, assuming an educator’s role at home and taking the tzeniut factor into account when making choices have stayed the same, because those are Jewish issues and the continuity of mesorah is a basic Jewish concept.

Women, in my view, are most fulfilled when they are nurturers. They pray to join the Almighty in creating new life and sustaining it. Childbirth, nursing and childrearing however, are actually vicarious and selfless experiences in which the child is the central figure and the mother’s happiness lies in seeing the children she loves thrive due to her efforts. This is a powerful message to womankind about real fulfillment. It was Rabbi Ebstein’s message. It is why I would rather watch my husband and sons dance with their rosh yeshivah and the Torah than do so myself—and why I have no need to try to take over men’s roles in Judaism when I have a rich, demanding and fulfilling status of my own.

1 1 vote
Article Rating
This article was featured in the Summer 2016 issue of Jewish Action.