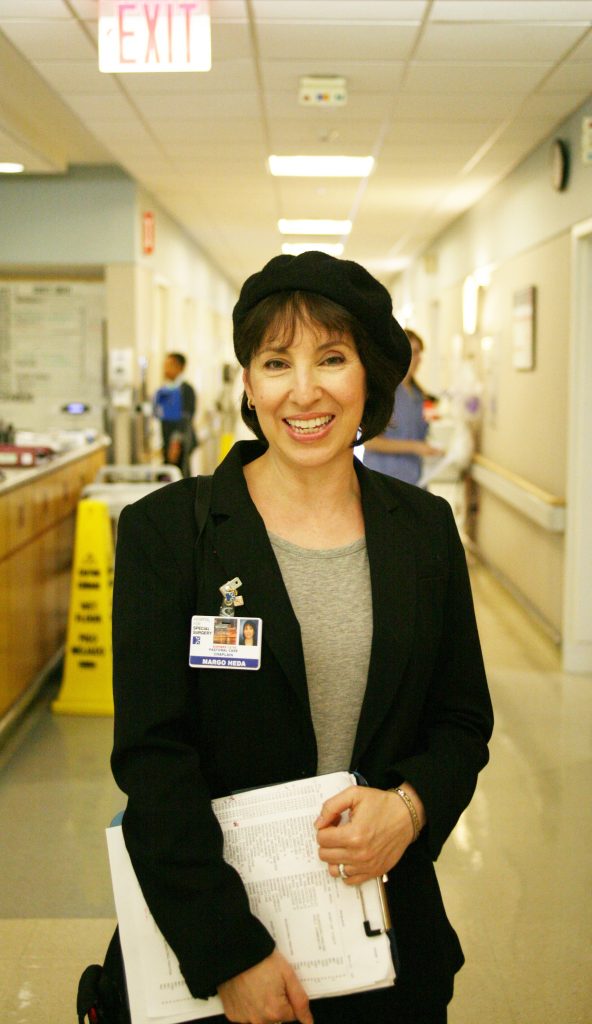 Margo Heda, staff chaplain at the Hospital for Special Surgery (HSS) in Manhattan, is inspired by this imperative every day. “Chaplains are spiritual ‘accompaniers,’ and we try to assist patients through a number of avenues,” says Heda, a mother of two teenage boys from Northern New Jersey. “It’s a privilege and a mitzvah to walk a few steps with a patient on his or her journey.” Heda has been working as a chaplain at HSS since 2012.

Heda, who has master’s degrees in Jewish education and in music, sometimes uses song to connect to and soothe her patients. In her work helping patients and their families cope with illness, loss, grief and transition, Heda has seen that music has the power to “change the air in the room.” She was once working with a dying patient, and the woman’s breathing was belabored. While talking to the family members present, who were struggling with their own pain and grief, Heda found out that the patient loved Yiddish music. Heda began to softly sing a Yiddish lullaby; after a few moments, to her surprise, the woman’s breathing became calmer and more relaxed. Another time Heda sang to a patient who was considered unresponsive. While she sang, she suddenly noticed the patient appeared to be crying.

Prior to becoming a chaplain, Heda spent a few years running a therapeutic music program for the frail elderly and those afflicted with dementia. “Working with this population influenced me greatly with regard to the power of music,” she says. “Often those with severe memory issues came alive when I led them in song, remembering lyrics and getting up to dance. It was remarkably transforming.”

Chaplains serve in many different arenas including prisons, the military, senior care or extended care facilities, the corporate world, sports teams and hospitals. Heda knew she wanted to work in a hospital because “people in a hospital are in an especially vulnerable position.” She works with patients, their families and the staff. “To quote my first teacher, I walk a little way with them in their suffering.” Heda also oversees kashrut, bikur cholim and Jewish programming at the hospital. Jewish chaplains, explains Heda, need an advanced level of Jewish education and clinical chaplaincy training; they do not require semichah.

What a chaplain does in a hospital varies by the facility. HSS uses a unit-based model. In this approach, a chaplain could see any and all patients in a particular unit, irrespective of their religious affiliation. Heda visits those patients who request to see a chaplain as well as those referred by staff. “I’m there to accompany the patient where he or she is at that time.” Heda adheres to the philosophy of chaplaincy which views the patient as a “living human document,” which means it is her job to study and learn about the person in order to figure out how to best understand and help him or her. “We start with the individual,” says Heda. She strives to hear the patients’ voices, fears and struggles, as well as their sources of meaning and strength.

While Heda is one of a few Orthodox women to be board certified as a chaplain, she believes that chaplaincy is a place where Orthodox women can make a significant difference. It’s a gender-neutral activity and there are no halachic barriers. In fact, Heda is currently mentoring a Satmar woman who aspires to be a chaplain, and she would welcome the opportunity to work with more Orthodox women. 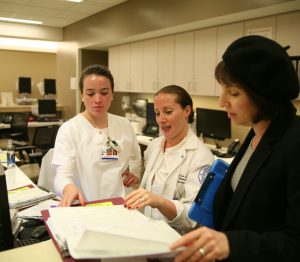 Rabbi Daniel Coleman is a board-certified chaplain trained in the art of providing quality spiritual support. He is the spiritual caregiver at North Shore University Hospital located in New York’s Long Island, and is the only full-time chaplain at the massive hospital. Though he spends time each day working with the hospital staff and in the ICU, Rabbi Coleman says that there’s no such thing as a typical day. “My job,” he says, “is primarily listening.” This is in contrast with the role a pulpit rabbi may play when visiting a congregant. Rabbi Coleman says a rabbi or clergy member is often perceived as having a specific agenda, such as encouraging emunah, doing mitzvot or being a defense lawyer for God. Not so with a chaplain. “I can sit with a patient in times when he or she may feel lonely or that no one understands them, and listen empathetically,” says Rabbi Coleman. “In the ICU, there’s no such thing as a superficial conversation.”

The patients Heda works with come from different religions and backgrounds. But Heda adds, “Chaplains are not to push religious beliefs on anyone. It would be malpractice to do so.” While working with a Muslim patient who did not know English, Heda needed a translator. During one session, the translator warned Heda, “Muslims often do not like to pray with people of other faiths.” Having worked with the patient in the past, Heda was confident that she could be of help during this visit as well. At the end of the visit, the patient’s son said to Heda, “There are two suns in New York—one that shines in the sky, and you who are shining for my family.” For Heda, this experience emphasized how spiritual care can transcend cultural and religious boundaries.

When visiting with Jewish patients, Heda lets them know that she is Jewish too, because they often assume that chaplain means non-Jewish clergy. She finds that Jews are afraid they are “going to be evangelized.” She makes it clear, however, that she is not a rabbi. Once trust and rapport have been established and people understand that she is not there to push a particular point of view, Heda has no problem identifying herself as a Modern Orthodox Jew if patients ask about her religious affiliation. With her more observant Jewish patients, Heda describes herself as a “Klal Yisrael-nik.”

“This usually gets me some looks of confusion, and I have to repeat it more than once until people understand what I am saying,” says Heda. “It’s not a common label, but it’s one I connect to deeply.”

Neshama: the National Association of Jewish Chaplains (NAJC) sets certification standards and certifies qualified Jewish chaplains. Cecille Allman Asekoff, the executive vice president who has worked with NAJC for twenty-five years, says the organization is part of a multi-faith collaborative of professional chaplaincy groups of North America. Together, these groups developed common ethical, educational and certification requirements for professional chaplaincy. However, each organization is able to add to the common standards and obligations. For example, NAJC added a Jewish education and theological component to Jewish chaplaincy requirements. Asekoff notes, “We certify Jewish chaplains and not chaplains who happen to be Jewish.”

To be a Jewish chaplain, one must have advanced Jewish education or its equivalent and be competent with rituals and texts. To become board certified, one must complete four 400-hour units of Clinical Pastoral Education (CPE) classes.

According to Asekoff, the CPE units are intense and challenging. “In addition to completing the training, to be an effective chaplain you have to be someone who cares about the world, who wants to make a difference in the individual’s life and sees him or herself as part of the medical team,” says Asekoff. 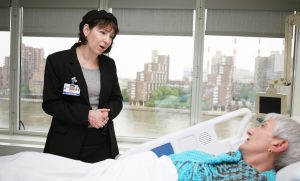 Margo Heda meets with a patient at the Hospital for Special Surgery in Manhattan.

Asekoff was the one who encouraged Heda to enter the program. “I detected in her the qualities one needs to be a chaplain.” It was clearly the right call. Heda was hooked after one class, as chaplaincy includes the fields she is most interested in: spirituality, psychology, theology and ethics.

Rabbi Coleman feels that women are especially well suited for the role of a chaplain. He points to the Kel Malei Rachamim prayer, recited for the soul of the departed. Rachamim means compassion, and its root, rechem, means womb. This alludes to the fact that mothers generally have a special ability to be nurturing and compassionate, says Rabbi Coleman. Similarly, Rabbi Coleman also notes that when making a mi sheberach, a public prayer or blessing recited in shul for an individual in need of healing or other form of Divine help, we use the mother’s name. Rabbi Coleman believes that women are inherently gifted with qualities that are at the heart of professional chaplaincy.

Heda takes great pride in studies that show how chaplains improve patient outcomes and satisfaction. “Spiritual care is rightfully part of best practices in the healthcare setting where increasingly, there is a desire to treat the whole patient: body, mind and spirit.”

5 1 vote
Article Rating
This article was featured in the Fall 2016 issue of Jewish Action.