Answering the World’s Most Famous Atheist

Richard Dawkins—who holds the dubious title of being the world’s most famous atheist—recently promoted a new theory explaining the origin of the universe as the “final nail in the coffin of religious belief.” Below is Professor Nathan Aviezer’s incisive response to Dawkins.

Stephen Hawking and Lawrence Krauss, two very prominent physicists, recently proposed a theory that explains how the universe could have appeared spontaneously from nothing. Both scientists have published books for the layman to explain their theory: The Grand Design by Hawking (New York, 2010) and A Universe from Nothing by Krauss (New York, 2012). Both books became best-sellers.

This new theory combines famed physicist Richard Feynman’s novel approach to quantum theory with a recent formulation of string theory, but these technical details need not be discussed here. What is important for our discussion is that this theory provides a scientific explanation for how the universe could have come into being spontaneously. The new theory is still at the level of speculation, but let us assume that the theory is eventually confirmed. The key question is: what are the theological implications?

Richard Dawkins’ Reaction
Richard Dawkins recently retired from his academic chair at the University of Oxford as professor in the public understanding of science. Dawkins, author of The God Delusion, also has the dubious distinction of being the world’s best-known atheist.

The world did not have long to wait for Dawkins’ reaction to this new theory: “Darwin kicked God out of biology, and now Hawking has administrated the coup de grace.”1 It is instructive to examine Dawkins’ statement in more detail. We begin by writing down the first part of his statement in a formal way.

Fact: There are many different species of animals.

Conclusion: Therefore, God is not the explanation of this fact. Or, in Dawkins’ eloquent language, “Darwin kicked God out of biology.”

The error in the above argument is obvious. Dawkins’ conclusion is based on his erroneous assumption that there is only one explanation for the animal kingdom. If this were the case, then and only then it would follow from Darwin’s explanation that all other explanations must be wrong, indeed implying that “Darwin kicked God out of biology.” Before discussing Dawkins’ assumption, let us consider some other examples. 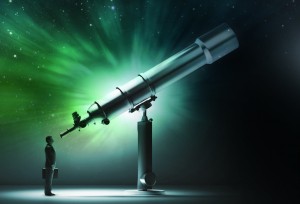 For many years, no one could explain the ocean tides. Then, in 1687, Isaac Newton explained that the ocean tides are due to the gravitational attraction of the moon.

For many years, no one could explain the rusting of iron or corrosion of metals. Then, in 1775, Antoine Lavoisier explained that rusting and corrosion are caused by oxidation, that is, by the chemical combination of the metal with oxygen.

However, Dawkins did not loudly proclaim that “Newton and Lavoisier have kicked God out of oceanography and chemistry.” Why did the scientific explanations for processes in biology (evolution) and in cosmology (origin of universe) lead Dawkins to gloat that God was kicked out of those spheres whereas Dawkins said nothing in response to the scientific explanations for processes in chemistry (rusting) and in oceanography (ocean tides)? What is the difference between biology and chemistry?

William Paley’s Watchmaker Argument
The special feature of the origin of the animal kingdom and the origin of the universe is that many religious people have claimed that it is impossible to explain these phenomena without assuming Divine intervention. Most famously, British theologian William Paley wrote in 1802 that just as a watch proves the existence of a watchmaker, so does the animal kingdom prove the existence of its “Maker,” that is, God:2

If one now considers the natural world, with its vast panorama of animals and plants, each consisting of many complex patterns of tissues and organs that function together in intricate ways to permit each animal to live and bear young, one sees far more complexity than is found in any watch. Therefore, if the complex design of a watch requires a watchmaker, how much more so must the complex design of the natural world require a “Maker,” who can only be God.

In contrast to Paley’s assertion, Darwin later showed that it is possible to explain “the complex pattern of tissues and organs” found in every animal within the framework of science, without requiring Divine intervention. Therefore, Dawkins felt free to proclaim that “Darwin kicked God out of biology.” The fault lies within the religious community, which had unfortunately decided that the existence of the animal kingdom proved the existence of God because it could not think of any other explanation. Therefore, when Darwin proposed another explanation—the scientific explanation—Dawkins could gloat.

Reaction of Other Religious People to Darwin’s Theory
The reaction of religious people to Darwin’s theory of evolution was the subject of a comprehensive study by Professor Ronald Numbers, president of both the History of Science Society and the American Society of Church History.3 Unfortunately, there are religious scientists who, following Paley, continue to this day to claim that the animal kingdom cannot be explained without Divine intervention.4 However, there were religious leaders who saw matters in a very different light.

Rabbi Samson Raphael Hirsch was known for his uncompromising opposition to any idea that deviated even slightly from Orthodox Judaism. Shortly after Darwin’s theory was published, Rav Hirsch wrote the following:5

If the notion of evolution were to gain complete acceptance by the scientific world, Judaism would call upon its adherents to give even greater reverence to God, Who in His boundless creative wisdom, needed to bring into existence only one amorphous nucleus and one law of “adaptation and heredity” in order to bring forth the infinite variety of species that we know today.

Rav Hirsch was preceded in his view by Charles Darwin himself, who ended his famous book, The Origin of Species, with the following stirring words:

There is a grandeur in this view of life, having been originally breathed by the Creator into a few forms or into one, and from so simple a beginning, endless forms most beautiful and most wonderful have been and are being evolved.

God and Evolution
Both Darwin and Rav Hirsch viewed evolution as the mechanism used by God to produce the animal kingdom. Particularly interesting is Rav Hirsch’s statement that the evolution of the animal kingdom is even more impressive than producing every species by a separate act of Divine creation. Although it is impressive to make a beautiful pair of shoes, it is much more impressive to make a factory that automatically takes raw materials and from them produces “endless forms” of shoes “most beautiful and most wonderful.”

Rav Hirsch stresses that God works within the laws of nature (olam keminhago noheg).6 This important principle explains how God interacts with His world. It follows from this principle that no scientific discovery can cast doubt on the existence of God.

Has God Been “Kicked Out”?
We now return to Dawkins’ assumption that there is only one explanation for the animal kingdom and the origin of the universe. On the basis of this erroneous assumption, Dawkins concluded that a scientific explanation proves that the explanation of Divine intervention must be wrong, leading him to gleefully declare that “God has been kicked out.”

In fact, the opposite of Dawkins’ conclusion is true. We expect God to have created the universe through the laws of nature because He does everything through the laws of nature. Therefore, the recent discovery of Hawking and Krauss that the origin of the universe can be explained by combining quantum theory with string theory actually serves as a confirmation of how God operates.

It is mind-boggling to compare Darwin’s statement (“There is a grandeur in this view of life . . . originally breathed by the Creator . . .”) with Dawkins’ statement (“Darwin kicked God out of biology”). From Darwin’s theory, Dawkins has concluded the exact opposite of what Darwin himself concluded. It is with considerable irony that we note that Dawkins’ professorship is in the “public understanding of science.”

Charles Darwin concludes his book by expressing his awe at the grandeur of the Creator, which he sees in the development of the animal kingdom. By contrast, Richard Dawkins thinks that the development of the animal kingdom undermines our faith and justifies the rejection of God. Perhaps one can summarize this anomalous situation by saying that “Darwin has kicked Dawkins out of theology”!

1. Quoted in “Another Ungodly Squabble,” the Economist, September 5, 2010. Dawkins made similar remarks in his afterword to the book by Krauss, A Universe From Nothing (New York, 2012), 191.

To listen to an interview with Professor Nathan Aviezer, visit http://www.ou.org/life/community/savitsky_aviezer/.

0 0 vote
Article Rating
This article was featured in the Spring 2015 issue of Jewish Action.