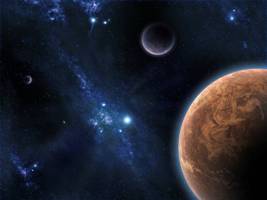 . . . IN THIS LIES THE SECRET of the table [in the Tabernacle of the desert]. For since the time that the world came into existence, God’s blessing did not create something from nothing: instead the world follows its natural course [haolam keminhago noheg]. . . . But when the root of the matter already exists, the blessing descends upon it and increases it, just as Elisha said [to the widow], “Tell me what you have in the house,” and then the blessing came upon the pot of oil that she already had, and she filled all the vessels from it (2 Kings 4:2-6; translation by Rabbi Dr. Charles B. Chavel, Ramban [Nachmanides] Commentary on the Torah, Exodus [New York, 1973]).

Thus wrote Ramban in his commentary on Exodus 25:24. But it seems strange that Ramban would tell us that what this story in the Book of Kings describes is an example of the world following its natural course: oil—matter—making itself from itself.

However, recent discoveries in the fields of cosmology and astronomy, and the theories of inflation physics in the early universe, seem to confirm Ramban’s kabbalistic insight. Ramban, commenting on Genesis 1:1, 1:8, 1:26 and 2:3, repeatedly mentions that the only actual physical creation God created was at the opening of Day One, as it says, “God created the heavens and the earth” (Genesis 1:1).

From the raw material created on the first of the Creation days, all matter was subsequently made. The creations mentioned on Day Five (Genesis 1:21) and Day Six (Genesis 1:27) were spiritual, not physical, creations—the souls of life—the nefesh and the neshamah, respectively.

If, however, there was only one physical Creation, how are we to understand the Tanchuma on Leviticus 8:3, that when God created the world it was not even as big as the black center of an eye (“dok ha’ayin”) and that God then stretched space out to the vast regions we see? Ramban claims that the initial size of the universe was even smaller than a grain of mustard. That turns out to be central to one of the leading theories of our existence. All cosmological evidence indicates that the universe was created as a minuscule point and that since Creation, it has been expanding steadily. But as uncanny as it may seem, the universe is not expanding due to new space forming, with additional new layers as in an onion or head of lettuce. That would mean there is a continual creation of new space, and all scientific evidence tells us that this is not the case. Rather the data reveal that the original space, from that tiny speck that was the first creation of space, is stretching. Though the universe is enlarging, no new space is being created. The galaxies of the universe move apart because the space between them is stretching and they are carried along by this movement. This is a fundamental concept to the cosmological understanding of our magnificent, though at times confusing, universe.

Space literally made itself, and is still making itself, from the point of its beginning. But what of the vast amounts of matter present in the universe, the matter from which are composed the hundred or so billion galaxies, each with a hundred billion stars? From where did all this matter arise? Here is where the account of Elisha and the widow’s oil come in.

Just as the widow’s oil made itself in order to fill the empty pots, so did the matter of the universe do likewise.

We’ve already established that all the matter we observe today on earth and in the reaches of space must have been concentrated in the original speck in space. Einstein, in the most famous equation ever written, E=mc2, revealed that energy and matter are two different forms of one reality. Matter is actually energy in the condensed form, just as ice is solidified water. Having personally witnessed the detonation of six atomic bombs, I can attest to the power of a few grams of uranium being converted back to their original primordial form of energy. Energy is ultimately compressible. The initial Creation brought matter into being in the form of energy. There are many forms of energy. A fraction of a microsecond after the Creation, that energy was concentrated as exquisitely energetic electromagnetic radiation—in essence, super-powerful light beams. In theory, it might have been possible to compress and concentrate all the needed energy to make all the matter of the universe in the tiniest of points. But it turns out that such extreme concentration was not necessary. Current theories of how the universe progressed immediately after Creation (and this is obviously theory since the conditions of the intense energy, temperature and pressure during the first micro microsecond of existence cannot be replicated) bring us an account of matter making itself—reminiscent, though on a much more ethereal scale, of the widow’s oil.

The big bang theory does not imply that we know what caused the big bang creation. Science has several theories. The Torah obviously opts for God as the eternal source of being. The appearance of the minuscule point at Creation marks the entire universe at its beginning. This was not a point in a vacuum; a vacuum is space itself. This tiny point was all there was, and outside of the point was God.

According to inflationary theory, in a minute fraction of a second immediately following the Creation, a repulsive gravitational field that pushed out, rather than pulling in (characterized as a false vacuum), exploded, and in doing so expanded and stretched space by a factor of ten million billion billion (1025). In fact, one can define the big bang as the initial Creation, or, equally acceptable, the big bang might be this burst of inflation that followed the Creation. For a sense of what that factor of expansion represents, the same expansion would stretch an object the size of an ordinary green garden pea to the size of our galaxy, the Milky Way, a diameter of 100,000 light years, or 1018 kilometers. But most amazingly of all—and this is reminiscent of the widow’s oil—in that sudden brief expansion lasting less than a billionth of a billionth of a second, the matter in the original speck made more of itself from itself. Just as the space expanded—stretched out—by a factor of ten million billion billion, the amount of matter simultaneously also increased by the volume represented in that same ten million billion billion factor. Sounds bizarre, but that is the theory that conforms with our understanding of the physics. Just as the widow’s oil made itself in order to fill the empty pots, so did the matter of the universe do likewise. And, just as with the oil, the wonder stopped once the vessels were filled, so too did the self-making of matter cease after the sudden initial expansion. Since then, the universe has been coasting outward at a far more leisurely pace, forming that initial primordial energy/matter into the world we see about us today.

The account of Elisha and the widow seems bizarre, boggles the imagination. But though it may seem astonishing, it correlates to the science of the very beginning of our universe and of its continuing expansion. Oil making itself—this is the world following its natural course, just as Ramban claimed.

5 1 vote
Article Rating
This article was featured in the Winter 2009 issue of Jewish Action.