A volunteer for “Am Yisrael vs COVID-19” delivering groceries to homebound families in Brooklyn. Courtesy of Nicole van Amerongen

While there have been so many wonderful chesed initiatives in our communities over the past few months, we are highlighting but a few that illustrate what one individual’s determination and perseverance can accomplish.

Holy Name Medical Center in Teaneck was at the epicenter of the Covid-19 outbreak in New Jersey. The doctors and nurses at this hospital (and others) were on the front lines 24/7, and we at Areyvut felt that the Jewish community should express its gratitude for their endless service. [Areyvut is a North Jersey-based organization that engages Jewish youth in chesed and in making the world a better place.] 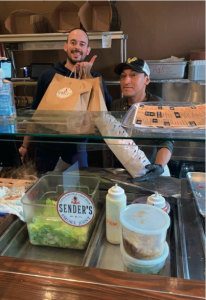 The meals we provide are from a variety of kosher restaurants; it’s important to help the local Jewish food businesses. Each meal is individually packaged in sanitized conditions (we can’t just order a pizza for people to share!). I heard that a local kosher restaurant was going to close before Pesach and not reopen. I looked into the circumstances and decided that along with other restaurants, we would order from that restaurant as well to help keep it afloat.

Areyvut is absorbing some of the costs, and in just a few weeks we raised $22,000. We publicized this initiative through social media and articles in the local papers, and it just took off. One block in Teaneck found out about the initiative through a neighborhood WhatsApp group, and everyone on the block donated.

Overall, the response has been amazing. We received this message from one of the medical personnel: “Thank you for showing such kindness to the healthcare workers. It was my first meal at work in two weeks!”

Rachel Wizenfeld is a Los-Angeles-based writer, crisis counselor and school psychology graduate student. She is a longtime contributor to Jewish Action and to other publications.

By Nicole van Amerongen, as told to Rachel Wizenfeld

After all classes at Columbia University were canceled, a fellow student and I were discussing how helpless we felt. We wanted to do something to help the Jewish community. We decided to launch a WhatsApp group of volunteers who would run errands for the elderly, immunocompromised and those ill with the virus. Our volunteers assisted with whatever was needed: Pesach items, groceries, medicine pick-ups, transporting things to and from family members in the hospital, et cetera. We sent requests to our volunteers via WhatsApp, and then connected the volunteer directly with the individual making the request. We publicized the project on social media, as well as on sites that offered us free publicity. One student helped us develop a hotline and a web site. When the hotline became unmanageable, we added eight more dispatchers, mostly our friends. Known as “Am Yisrael vs. Covid-19,” our group currently has 1,100 volunteers covering New York and New Jersey, including Monsey, Lakewood, the Five Towns and Far Rockaway, West Hempstead, Manhattan, Riverdale, Bergen County, Passaic, Queens, and Brooklyn.

The first few days we were getting about two hundred calls each day and running ten to fifteen errands.  At our peak before and during Pesach, we were getting about 600 calls daily and running fifty to sixty errands. Our volunteer base is diverse—teenagers and young adults who are out of school, but also men and women in their forties and fifties.

Our volunteers, many of whom are forming close relationships with the callers, are amazing. One night I got a text at midnight from a woman who had seen my cell phone number on the original flyer (our hotline hours are 8 am to 11 pm). She wrote that she has a friend in Boro Park who is ill and desperately needs a space heater, as the heating in her apartment is not working. I replied that it’s too late since the hotline is closed, but that she should contact me again in the morning and I would post the request then. The woman agreed but asked if I could post the request with her phone number that night, so she wouldn’t have to bother me in the morning. At 12:30 am, I posted the request on the Brooklyn chat, thinking no one would even be awake. The woman got fifteen calls that night from people offering to bring over a space heater!

Nicole van Amerongen is a college student who lives in Woodmere, New York.

I’m a chef based in Jerusalem, and Pesach is my busiest season. This year was obviously different. Because of the virus, Pesach programs were canceled and travel was out of the question, so I offered people meals for Shabbat Hagadol and the Seder. The Shabbat Hagadol meal delivery got off without a hitch. I turned up the music in my car and was on my way. But suddenly things changed. On Tuesday, the day before Pesach, the Israeli military placed extreme restrictions on movement. In Jerusalem, the penalty for traveling around was severe.

All of my customers were planning on spending Pesach alone. None of them had ever made Pesach before. They were relying on me for meals, and the streets were completely blocked. It’s sad enough to eat alone. Now they would have no food. Nothing.

The streets were silent. No one was going anywhere. I would pay an enormous fine for delivering Pesach meals. But it had to be done because my customers were relying on me. Suddenly, I had an idea. My upstairs neighbor works for the government. Maybe he could clarify the lockdown instructions for me? Perhaps I could find a way to deliver the food within the new guidelines. I called and asked him what to do about the Seder meals.

“Grace, you have welcomed us on so many Shabbatot. We can help get the deliveries out,” he said.

My neighbor had official documents permitting him to drive anywhere in the city. I packed the boxes of food, and he and I were on our way. We were stopped by the police five times, but once they understood our mission, they encouraged us to continue. Arriving at my customers’ homes one by one, they were in disbelief. Was my food a Pesach miracle?

In times like this, when things are so uncertain and so many people are lonely and sad, we can always choose to help each other. Kindness outweighs everything.

Grace Natik works as a private chef in Jerusalem.