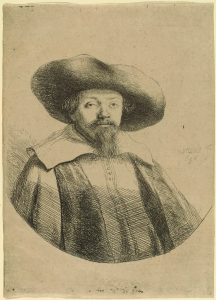 Art historians and scholars no longer accept that this famous portrait by seventeenth-century Dutch painter Rembrandt is of Rabbi Menasseh ben Israel. Etching on paper. Courtesy of the National Gallery of Art, Washington, DC

By Phillip Greenspan and Annelies Mondi

Most Jews with a sense of rabbinic literature and Jewish history have a mental image of what they believe Rambam looked like. That image is based on an eighteenth-century depiction, produced approximately 500 years after Rambam’s death. Similarly, there is a French woodcut of Rashi produced in the sixteenth century, some 400 years after his death.

Portraits of rabbis, whether in painting or graphic form, are first found in Italy in the sixteenth century. (Why were these portraits popular? No doubt for the same reason that paintings and photographs of Torah scholars adorn the walls of thousands of Orthodox Jewish homes today.) Ask most Jews who created the very first notable rabbinical portrait, and in all probability they will tell you it was the seventeenth-century Dutch painter Rembrandt van Rijn, regarded as one of the greatest painters in all of European art.

Rembrandt, like many other artists of his day, drew heavily on Biblical themes. Because of this, and also because of his choice of several Jewish personalities as subjects for his portraits—perhaps due to the fact that he lived in Amsterdam’s Jewish Quarter—it has long been thought that he was associated with the Jewish community of Holland. But his relationship with the Jewish community is not as clear-cut as was once believed.

In 1636, Rembrandt etched a portrait believed to be of Rabbi Menasseh ben Israel,1 a major figure in the Amsterdam Sephardic community and certainly an acquaintance of his. However, art historians and scholars no longer accept that Rembrandt’s subject is, in fact, Rabbi Menasseh ben Israel; indeed, the sitter bears only a passing resemblance to an earlier engraving of the rabbi by the Jewish artist Shalom Italia. Interestingly, none of Rembrandt’s portraits of Jews can actually be identified with a specific rabbi. Overall, it is questionable whether his paintings with titles referring to Jewish individuals were, in fact, of Jews (although an etching he did in 1647 of the Jewish physician Ephraim Bueno is clearly Bueno).

So if Rembrandt did not create the first rabbinical portrait considered to be a great work of art, who did? 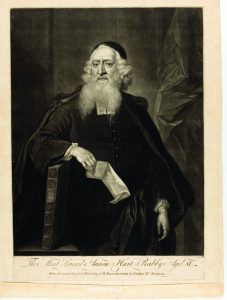 Artist James McArdell’s 1751 mezzotint on paper of Rabbi Aaron Hart is regarded as an excellent reproductive print of a rabbi. Rabbi Hart was the first chief rabbi of the United Kingdom and the rabbi of the Great Synagogue of London from 1704 until his death in 1756. Courtesy of the Library of The Jewish Theological Seminary, New York

While many seventeenth and eighteenth-century rabbinical portraits are quite good, none were painted by a major European artist and can be categorized as great. Moreover, for a work to be considered a great work of art, it has to be an original and not a reproduction. As an example of an excellent reproductive print of a rabbi, there is James McArdell’s 1751 mezzotint of Rabbi Aaron Hart, the first chief rabbi of the United Kingdom and the rabbi of the Great Synagogue of London from 1704 until his death in 1756. The print was based on a painting by Bartholomew Dandridge, a minor British artist, which was housed in the Great Synagogue, but was apparently destroyed during the Nazi blitz of London. This painting was never recognized as a great work of art.

After conducting considerable research, we discovered a somewhat surprising answer to our question: the first notable rabbinical portrait in Western art is neither that of a famous Talmudic scholar nor of a spiritual leader of a large and impressive congregation. Rather it is an etching by Georg Friedrich Schmidt, an artist known for being a keen follower of Rembrandt, whose etchings are considered some of the finest works of eighteenth-century Germany.2

In 1762 Schmidt etched a portrait of Rabbi Michel (Jechiel) Hirsch, the first rabbi of Potsdam, Germany, a rather tiny Jewish community, perhaps consisting of less than one hundred families at that time. Schmidt depicts the rabbi dressed in a fur cap and the caftan traditionally worn by Polish Jews, with fur cuffs and tied with a sash. The artist imbues his rendering of the rabbi with the humanity and inner confidence typical of the later portraits of Rembrandt. The humanity depicted here is significant especially when contrasted with the anti-Semitic art so common in Medieval Europe, which often depicted Jews as threatening figures with hooked noses.

At the bottom of the etching is a fascinating inscription reading, “Hirsch Michel presentirt an Isaac Onis durch Aaron Monceca—Hirsch Michel presents to Isaac Onis by Aaron Monceca.” The inscription refers to two characters, Isaac Onis and Aaron Monceca, from the six-volume novel Lettres Juives (loosely translated as The Jewish Spy) by Jean-Baptiste de Boyer, Marquis d’Argens, published in the 1730s.3 The novel consists of a series of letters from five fictional distinguished Jews living in different European capitals, and it gained wide popularity throughout eighteenth-century Europe. 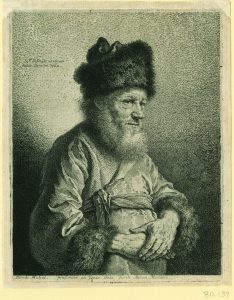 A 1762 etching by Georg Friedrich Schmidt, a keen follower of Rembrandt whose etchings are considered some of the finest works of eighteenth-century Germany, seems to be the first rabbinical portrait in Western art. The etching on paper is of Rabbi Michel (Jechiel) Hirsch, the first rabbi of Potsdam, Germany. Courtesy of the Leo Baeck Institute, New York

Both Schmidt and d’Argens were in the court of Frederick the Great and must have visited the king at his summer home, the Sanssouci Palace, in Potsdam—the town where Rabbi Hirsch served as rabbi. Besides this tangential relationship to Schmidt’s etching, it is known that d’Argens, a noted philosopher in the Age of Enlightenment, had an appreciation of Judaism.4 In fact, d’Argens hired Aaron Solomon Gumpertz as his secretary, who later became the first Jew ever to be present at a meeting of the Royal Prussian Academy of Sciences. It is reported that when King Frederick asked his ministers, “Can you give me one single irrefutable proof of the existence of God?” d’Argens purportedly answered, “Yes, your majesty, the Jews.” It was d’Argens who directly appealed to the king in support of Moses Mendelssohn’s request to become a “protected Jew” in Berlin (Moses Mendelssohn was a pupil of d’Argens’ secretary, Gumpertz.)

It is interesting to note that nowhere on the etching itself is there mention of Michel Hirsch being either a Jew or a rabbi; he is just a man with an arresting visage and distinctive stature. The print in the National Gallery of Art in Washington, DC does not refer to Hirsch’s religious affiliation. On the other hand, the subject is identified as being a rabbi in the catalog of the Leo Baeck Institute in New York, and has been titled in art history literature as “The Jew from Potsdam.”

Rembrandt supposedly sought the advice of Rabbi Menasseh ben Israel for some of his great Biblical paintings; Georg Schmidt may have had a similar relationship with Rabbi Hirsch. Whatever the reason for creating this etching, “The Jew from Potsdam” is one of the great rabbinical portraits of European art, and seemingly the first to deserve that title.

Phillip Greenspan is an associate professor at the University of Georgia, College of Pharmacy and a print collector; Annelies Mondi is deputy director of the Georgia Museum of Art.

5 2 votes
Article Rating
This article was featured in the Spring 2017 issue of Jewish Action.