How did a kid from Queens end up serving as the driver and eventually the meshareis of Rav Joseph Ber Soloveitchik?

Just shy of twenty years old in September 1979, I showed up at Yeshiva University with my own car for my first college semester. A friend of mine, David Holzer, had gotten married that year and gave over the “shamash” or “meshareis” job (a term used to describe the young men who helped the Rav) to his younger brother Barry. Noticing that I had a car, Barry asked if he could borrow it on Thursday afternoons to drive the Rav to LaGuardia Airport. The Rav taught in Yeshiva University beginning in 1941, but since he had been living in Boston since 1932, he didn’t want to leave the Boston Jewish community, and so he commuted to YU each week. By the time I arrived in YU, the Rav was flying in on Tuesday mornings, giving shiur numerous times and then flying back to Boston on Thursday afternoons. Barry would borrow my car on Thursday afternoons and take the Rav back to the airport. Truthfully, the arrangement was a bit inconvenient since I sometimes needed my car on Thursday afternoons. And on one occasion, before I had actually met the Rav, I needed to use my car and realized that Barry had not returned the keys. I went to his dorm room. No luck. I had no choice. I knocked on the Rav’s apartment door. Picture the scene. Random bachur knocks on the door of the gadol hador. Apparently, there was no meshareis there at the time since the Rav himself answered the door. Knees knocking, I mumbled, “Umm, is Barry here?” The Rav responded that Barry wasn’t in the apartment. I said, “Okay, please tell him that Lewis came by and was looking for his car keys.” What an awkward moment! 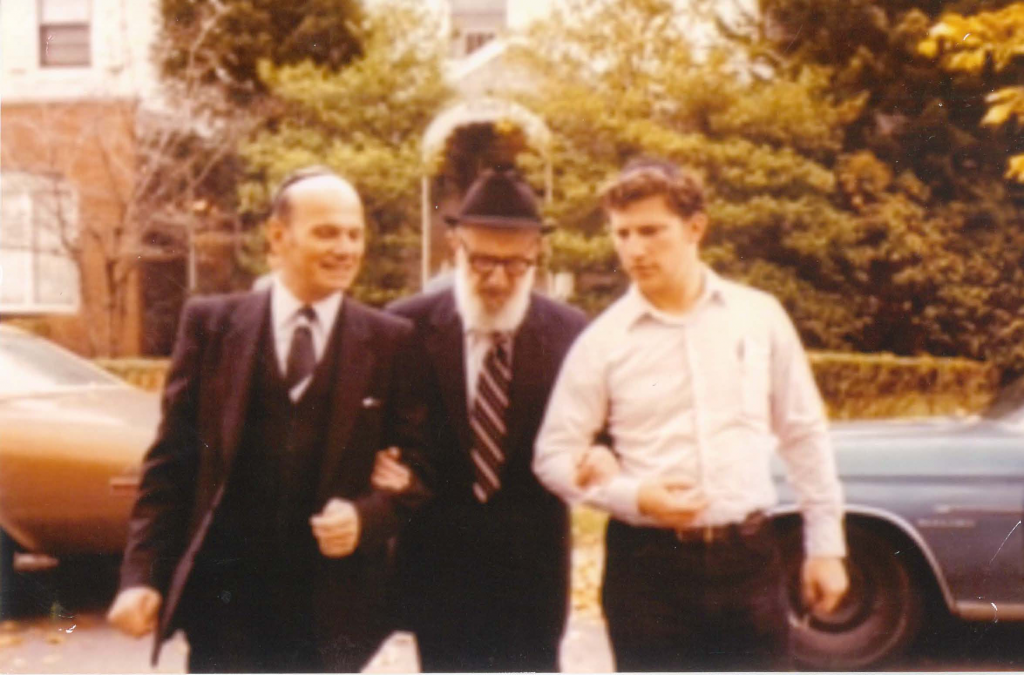 Rabbi Emanuel Holzer (left) and the author escorting the Rav from the brit of Rabbi Holzer’s grandson Zecharia (son of David and Rona Holzer). The brit was held at Rabbi Emanuel and Norma Holzers’ home in Kew Gardens Hills, November 1982. Photos courtesy of Rabbi Lewis Wienerkur

Most of the time, it was just the two of us in the car. At the airport, I would escort the Rav, walking with him onto the tarmac, even climbing the steps and getting onto the plane. (This was before the world changed on September 11, 2001). I would then help the Rav into his seat, and only once he was settled would I get off the plane. Once, the plane engine started rumbling with me still on board—I should have stayed and gone to Boston! More than once, a flight attendant would ask me, “Does the rabbi understand English?” I would laugh and say, “Pick a language. He knows many languages—or you can discuss physics or philosophy.” 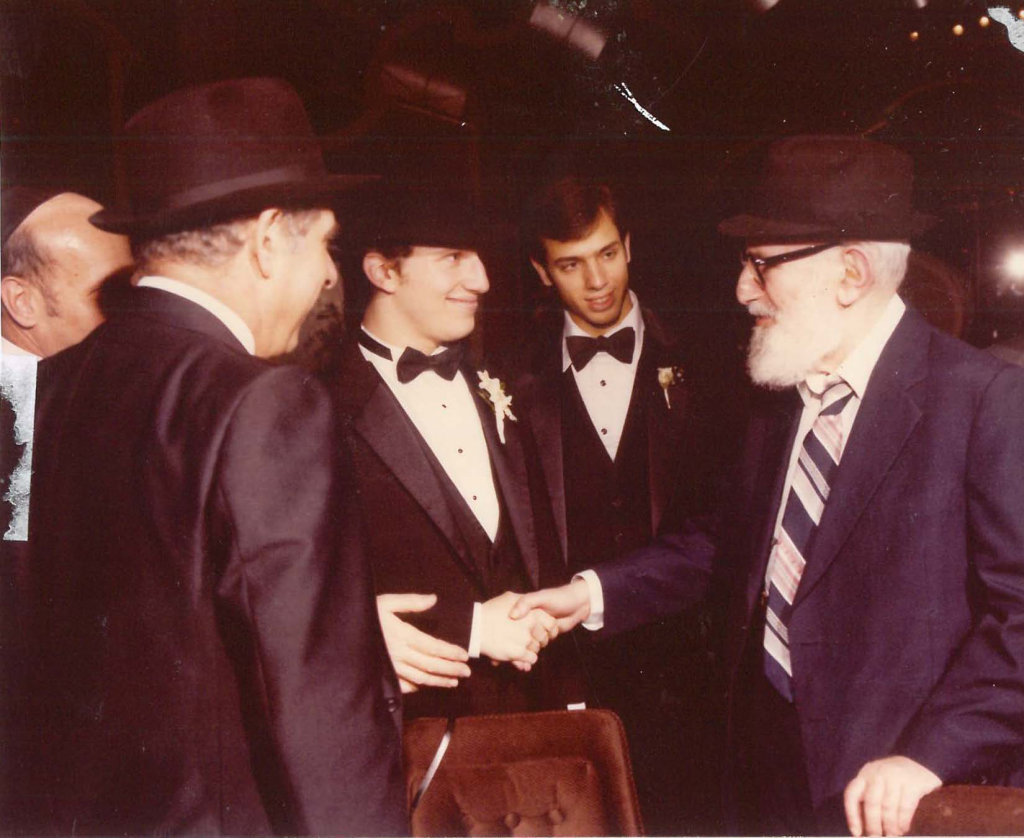 The Rav at the author’s wedding, Nov 29, 1982, held at the Manhattan Beach Jewish Center in Brooklyn. (The author is shaking the Rav’s hand.) Also pictured are Rabbi Fabian Schonfeld (on left, back to the camera), Rabbi Emanuel Holzer (partly obscured behind Rabbi Schonfeld) and Rabbi Dr. Barry Holzer (between the author and the Rav).

Riding in the car with the Rav was a wonderful way to spend time with him. Admittedly, I am a pushover, so anyone insistent enough would manage to come along for the ride. A YU talmid who was not in the Rav’s shiur once asked if he could accompany us as I drove the Rav. I didn’t know how to refuse. No sooner had we pulled out of Washington Heights when out came the notepad and the questions. Was all cheese kosher? No. What about all ice cream? No, again. The Rav continued to answer the questions patiently like the gentleman he was.

Finally, the talmid asked, “Rebbi, what should a ben chutz la’Aretz [resident of the Diaspora] do if he is in Eretz Yisrael for a chag?” (This was 1980 or 1981 when this question mostly applied to young men and women who spent a year studying in Israel.) The Rav answered, “He should perform mitzvot aseh like a ben Eretz Yisrael on the second day of yom tov but he should refrain from doing melachah.” The young man replied, “Oh, a day and a half,” using a popular expression referring to this halachic position. The Rav said, “I don’t understand what you’re saying.” The talmid repeated, “The Rav is saying that he should keep a day and a half.” The Rav said again, “I don’t understand what you said. Allow me to repeat myself. He should do mitzvot aseh like a ben Eretz Yisrael but he should refrain from doing melachah.” Ironically, everyone describes the Rav’s halachic position as “a day and a half”—everyone that is but the Rav! 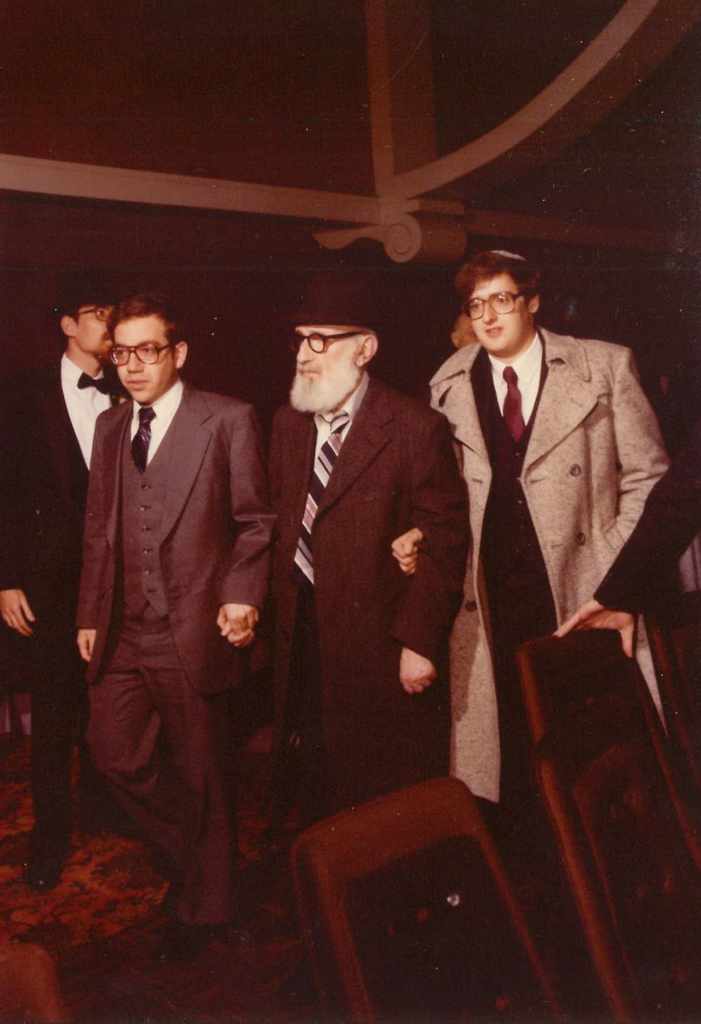 Two mesharsim escort the Rav at the author’s wedding.

Honestly, I viewed myself as “the driver.” I didn’t prepare a list of questions to ask. I kept the conversation light and specifically did not ask questions. Other mesharsim did the same. And I knew the Rav appreciated our company because of that. Of course, in retrospect, I could kick myself for not asking more and for not learning more from the Rav. What questions would I ask the Rav today? Most likely every single life question that’s come up since 1984 when I spoke to him last.

On one occasion, Seth Peyser, a Bostonian, asked if he could come along for the ride. When we got to the airport, Seth escorted the Rav to the plane. He returned to the car fairly quickly, chuckling, and said, “We were on line for the shuttle, and a man approached me. He whispered in my ear, ‘Is this Rabbi Soloveitchik?’ After I confirmed that he was, he said, ‘My name is Alan Dershowitz. I’m friends with his son Haym. I am going to Boston and am happy to escort Rabbi Soloveitchik to the plane.’ That’s why I’m back so soon.”

Eventually, I began serving as the Rav’s meshareis as well. I had actually been eagerly awaiting my chance to get the job but was passed over once or twice before they gave me the enviable position.

One afternoon when I arrived at the Rav’s apartment, he said, “Please put on a tie and jacket. We are going to my talmid’s wedding.” George Karasick, brother of Mark, one of the Rav’s more well-known mesharsim, was getting married in midtown Manhattan. I went to my room, quickly changed my clothes and rushed back. Off we went. Right before the chuppah, which was held outside on a cold winter evening, someone approached the Rav and said, “You will need an overcoat to perform the wedding.” The Rav responded, “Rabbi Dovid Lifshitz is here. He should perform the wedding.” Of course, within minutes, Rav Lifshitz walked over and offered the overcoat to the Rav. I wish I had recorded the two Torah giants insisting that the other take the kibbud. It was an awesome sight. Eventually, the Rav “won,” and Reb Dovid, as he was called at Yeshiva, served as the mesader kiddushin. (Rav Mosheh Lichtenstein told me recently that the Rav had a “longstanding policy that the zekan harabbanim [senior rabbi] at a wedding should be mesader kiddushin,” which is most likely why he deferred to Reb Dovid.) 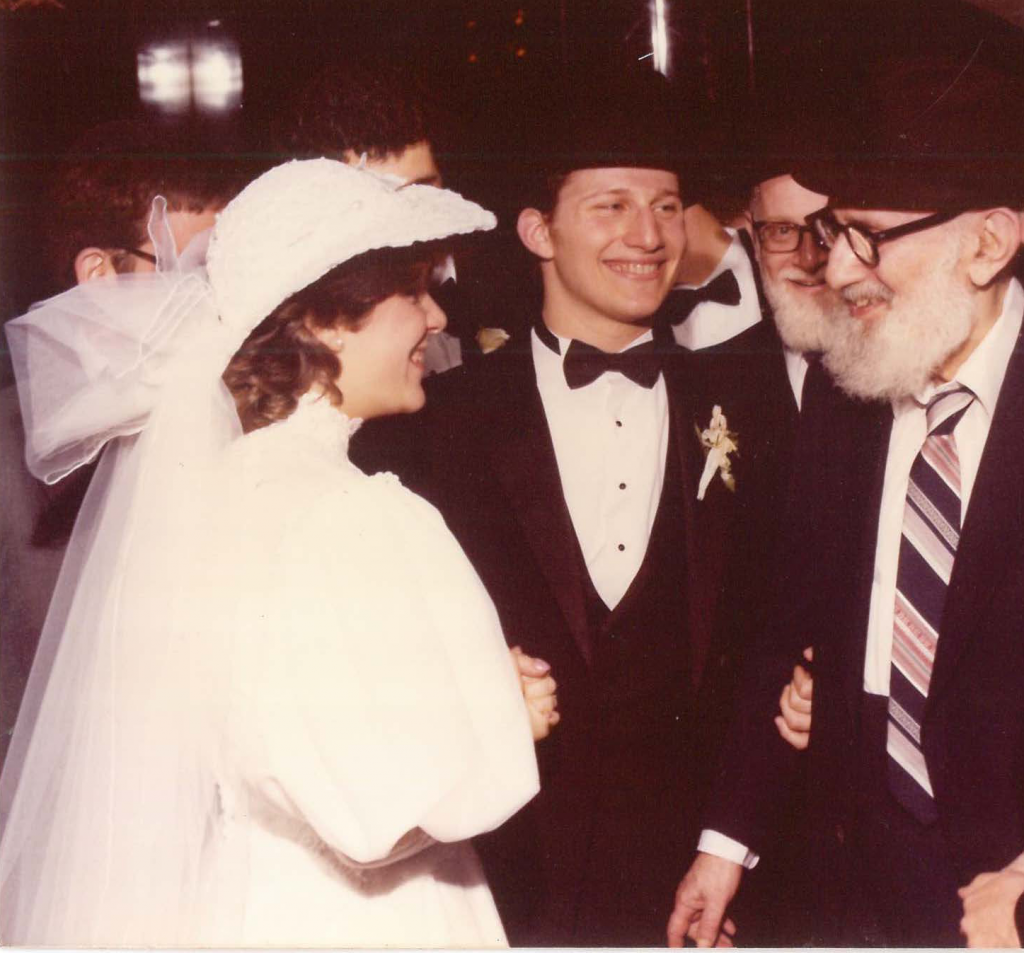 The author and his wife Melissa greet the Rav after the chuppah.

When I think back to those days forty years ago, one thing is apparent: the remarkable humility of the Rav. While I didn’t realize it at the time, we boys were constantly traipsing through the Rav’s apartment, eating vanilla ice cream and generally making his apartment our hangout.

One afternoon, I came into the apartment and the Rav called me over and asked me to drive Rabbi Julius Berman to his office downtown. It later dawned on me that this was the only time the Rav had ever asked me to do anything for him. He never made any demands on us. 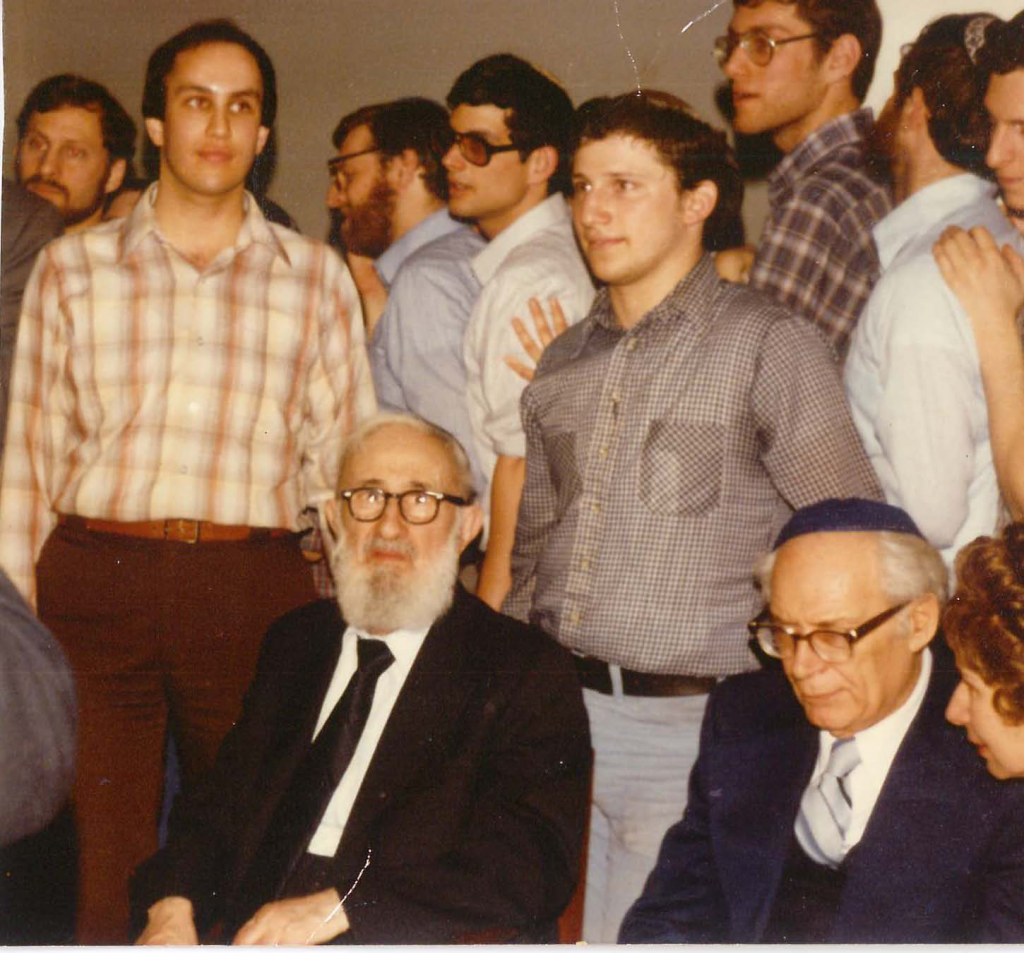 The Rav (seated) at the engagement party of Rabbi Chaim Ilson, his close student, in the spring of 1982 in the YU dorm. Seated next to the Rav are Mr. and Mrs. Ilson, parents of the chatan. Standing behind the Rav’s right shoulder is Rabbi Neal Turk. Standing behind the Rav’s left shoulder is the author. In the background (from left) are: Richie Horowitz (behind Rabbi Turk’s right shoulder); Matt Tropp; Larry Finson and Bennett Gottesman.

When the Rav entered a room, everyone would stand up for him. Everywhere he went, people would flock to him, eager to listen to his wise words. Even when he would make the short walk from his apartment to deliver shiur, there would be people following him, trying to get close to him, thrilled to be walking near the Rav. Yet he was always kind and gracious.

The Rav was also a courageous figure. Once he was no longer physically well, he could have retired. But he persisted in maintaining a grueling schedule, flying in every week from Boston. The daunting obstacles might have stopped someone else, but they didn’t stop the Rav. 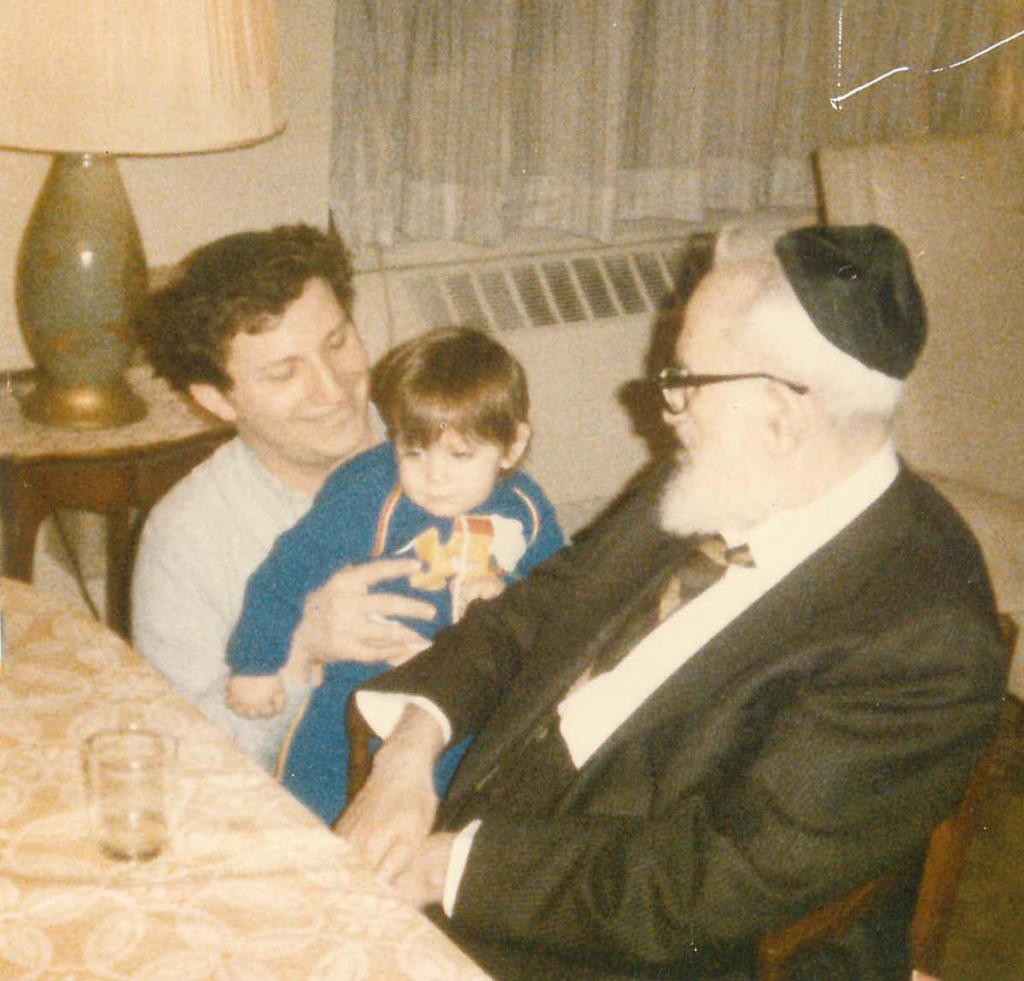 The author bringing his young son Akiva to meet the Rav in Rav’s YU apartment in the YU dorm, winter 1984-85.

One year, one of the mesharsim convinced the Rav that it was important that he attend the Yeshiva’s Chanukah chagigah. “Who else is going?” asked the Rav. He was not a suburban teen worrying about his image and with whom he would be seen. “Rebbi,” I asked, puzzled, “what do you mean?” The Rav responded, “Who else from our group—you, Kenny [Brander], Michael [Fredman] and Dovid [Gorelick].” Oh, our group! He meant the mesharsim!

When the Rav passed away in 1993, I went to the shivah house but sat in the back, preferring to remain unnoticed. Haym, the Rav’s son, saw me and called out, “Lewis just came in and sat in the back. Please come sit up front. Rabbosai, I want to tell you something. Throughout my father’s career, there were people who tried to make themselves important through my father. However, during my father’s last years in Yeshiva, there was a cadre of young boys who took care of him, and it had nothing to do with them. It was all l’shem Shamayim.”

I will always remember that moment.

Rabbi Lewis Wienerkur is a rebbi/director of Israel guidance at HAFTR High School, rabbi at the Woodsburgh Minyan, educational director at Camp Morasha and a CPA at his family’s firm.

Rabbi Dovid Bashevkin is the director of education for NCSY. His new book, Top 5: Lists of Jewish Character and Characters, was published by Israel Bookshop in February 2021.

5 4 votes
Article Rating
This article was featured in the Spring 2021 issue of Jewish Action.