By Raizy Rosenfeld, as told to Bayla Sheva Brenner

I had just exited the subway at Broad Street. While walking under scaffolding along Beaver Street, I heard a loud boom. I cowered, thinking something was about to fall on me, but to my relief nothing did. When I got to the corner of Beaver and Broadway, near the OU building, I had my first real inkling that something was very wrong.

I saw women in business suits and high heels running south towards Bowling Green Park. Why are they running? I thought. Then I noticed some people crying. Someone near me said there was a plane crash at the World Trade Center. Someone else said that was the second plane. I figured I would go to my office and see if I could find information on the Internet. 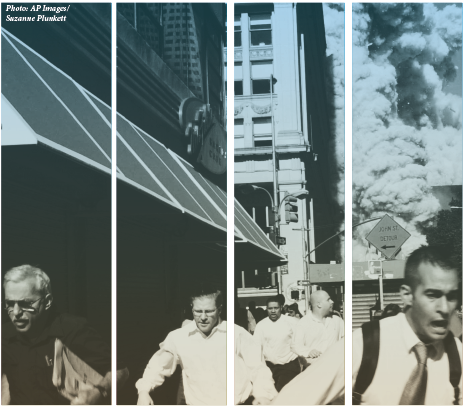 When I got to my floor, I noticed that the lights were flickering. What if the elevator stops working? I thought. I wanted to get out of the building and see what was happening. I went to Trinity Street and saw the Towers on fire. All kinds of thoughts went through my mind—even mundane ones, like how will they ever fix the hole in those buildings? Then, right in front of my eyes, one started going down like a candle. Everybody started running. I heard someone yell, “Look out, it’s coming!” I turned around and couldn’t believe what I saw. A huge skyscraper-tall cloud of smoke was coming toward us so fast, like a snake slithering through the buildings. I realized there was no way to outrun it. It caught up with me. Suddenly, I felt a gentle push against my back, like when an ocean wave pushes you. Day had turned to night; everything was gray and brown. I covered my nose and mouth with my hands, trying not to breathe in the thick dust. The buildings were locked and people wouldn’t let anyone inside; they didn’t want to let the dust come in. Whoever was outside was stuck.

The sky was snowing ash. It immediately brought to mind the scene in the movie Schindler’s List where it looks like it’s snowing and people look up; then the camera pans to a chimney of the crematorium and you realize that it’s not snow. I was very conscious that I might be breathing in human ash. It felt surreal, like you would imagine the end of the world. People were either inside buildings or walking through the streets mid-ankle in paper and debris.

I found a grocery store with its door open and the radio on. People were crowding around and listening. There was a feeling that we were all in this together, an instant camaraderie among strangers.

I turned around and couldn’t believe what I saw. A huge skyscraper-tall cloud of smoke was coming toward us so fast, like a snake slithering through  the buildings.

I got to the Brooklyn Bridge, and even though I wasn’t in the smoke anymore and it was the most beautiful, sunny day, it was then that I felt the most vulnerable. I thought a plane could come and crash into the bridge. All kinds of people were walking across it. I saw an elderly Chassidic man, his coat covered with dust, shuffling along. It made me think of exile; again we’re leaving, escaping evil and violence. I saw lots of shoes strewn all over the bridge, discarded high heels. It made me realize that even on a day as tragic as this, there were little blessings. I never wore sneakers to work, but because my feet were hurting me the day before, on that day I did.

When I reached Brooklyn, it seemed so grotesque to see normal life. People were going about their daily chores, in the supermarket, waiting at bus stops; everything seemed the way it was when I left that morning. I felt like I had just come off a different planet. I arrived home seven hours after I had left the office.

I was shocked to see the city reduced to ash. But I wasn’t surprised that it could happen—the way most Americans seemed to be. Jews have seen such tragedies happen in our history. We know people are capable of evil.

When I came back to work, two weeks later, it was Tzom Gedaliah—an overcast, gloomy day. It felt appropriate to come back on a fast day. The streets were still filled with dust. Every building was running on generators; you couldn’t hear yourself think. I came into my office, and although my window was closed, dust had seeped through the casement, coating the entire area near my window and even my work table.

During my lunch break, I went outside to see which stores were still open. Some had closed on 9/11 and never reopened. I noticed a store window display with a rack of clothing and a row of shoes. I thought, How cute, they are all the same exact color. Then I realized the items were all coated in dust.

It always bothers me when tourists ask where Ground Zero is. I feel like saying, “Here, right where you are standing.” It’s the entire Lower Manhattan. It’s the entire world. It’s not just one location—it’s everywhere.

Bayla Sheva Brenner is a senior writer in the OU Communications and Marketing Department. This article first appeared in the fall 2011 issue.