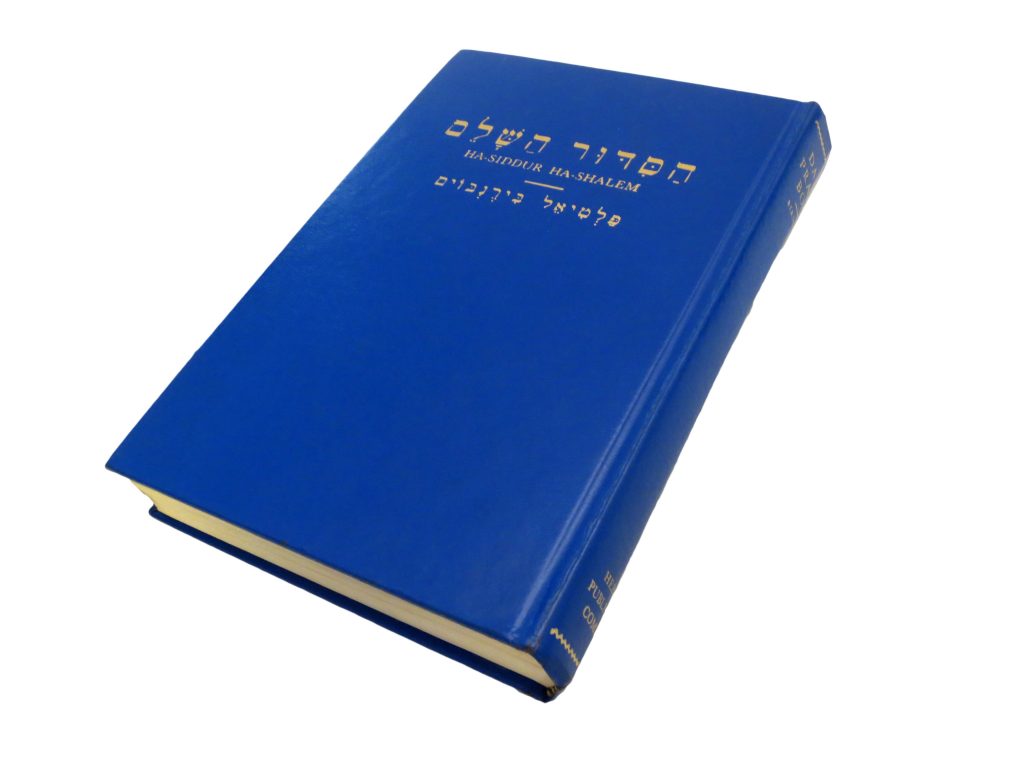 The Birnbaum Siddur, with nearly 800 pages, went through dozens of reprints. Birnbaum firmly kept the type all one size, because of his pedagogical belief that “children, trained in reading the larger type in the siddur, gradually develop a prejudice against whatever appears in the smaller print.” Courtesy of David Olivestone

The New York Times once aptly described him as one of the world’s “most obscure best‐selling authors.” Yet for many decades, in synagogues and Jewish homes throughout North America and even around the world, his was a household name. 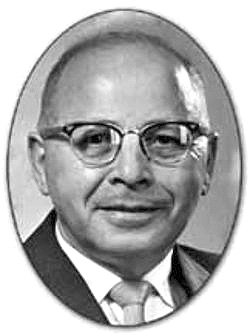 He was Dr. Philip Birnbaum, translator, editor and author of over twenty books of Judaica, chief among them Ha-Siddur Ha-Shalem, known everywhere as “The Birnbaum Siddur,” which was by far the most popular siddur used in Modern Orthodox congregations in the second half of the twentieth century. This year marked his thirtieth yahrtzeit since he passed away at age eighty-four.

Despite his one-time renown in the Jewish world, virtually nothing has ever been written about him, outside of a 1967 Jewish Press profile and a New York Times obituary.

I came to know Dr. Birnbaum in the 1970s, when for several years I was the editor at the venerable Hebrew Publishing Company (HPC) in New York, in its day one of the leading publishers of Judaica in America. The company was owned by the Werbelowsky family (later shortened to Werbel) and occupied an impressive former bank building on Delancey Street in Manhattan’s Lower East Side.

In addition to the many hundreds of books it published, HPC produced an extensive line of greeting cards, as well as cantorial and Yiddish theater sheet music, all of which it sold in its retail store on the ground floor and distributed throughout the world.

Publishing Jewish books is not usually a very lucrative pursuit, but Philip Birnbaum was almost unique in that his books sold so well that he was one of the very few Jewish authors able to sustain himself solely on his royalties. True, his needs were few, as he never married and he lived very simply, but once his books began to meet with success, he gave up his teaching positions and moved to Manhattan’s Upper West Side.

What is perhaps even more remarkable is that a nineteen-year-old Polish immigrant attained such a high level of fluency in a language that was not his mother tongue, and produced felicitous, articulate, eloquent and sometimes even poetic translations of complex texts. Not only was he a master of the nuances of English vocabulary, syntax and phraseology, he was also a superb Hebraist, which added yet another invaluable dimension to his work. The Hebrew Publishing Company occupied this former bank building on Delancey Street on Manhattan’s Lower East Side. As one observer wryly noted, “Since everything is more or less backward in a company that specializes in Hebrew and Yiddish, the building supports the columns instead of the columns supporting the building.” It was later converted into apartments, offices and stores. Photo: Robert K. Chin/Alamy Stock Photo

When he was not occupied with his scholarly pursuits in one of Manhattan’s several outstanding Jewish libraries, Birnbaum would write articles and book reviews for the Hebrew weekly Hadoar, published by the Histadrut Ivrit of America, of which he was a board member. Often, he would come into the HPC office to chat or to discuss possibilities for new editions of his works.

Birnbaum had high expectations of other people’s scholarship, which were not always met. Ira Kellman, a fellow congregant at The Jewish Center in Manhattan, remembers him as “very precise and scholarly. Rabbis were at peril if they made a mistake in their Hebrew or any other area of Birnbaum’s expertise.”

Attorney Lawrence Kobrin, who served as president of The Jewish Center, recalls that Birnbaum “was a very private person, immersed in his scholarship and publishing efforts. We invited him on several occasions to join us for a Shabbat meal, but I cannot recall his ever having accepted.”

Born in 1904 in Kielce, Poland, Philip (Paltiel) Birnbaum came to the United States in 1923. He attended Howard College (now Samford University) in Birmingham, Alabama, and in 1939 he received his PhD from Dropsie College (today the Herbert D. Katz Center for Advanced Judaic Studies at University of Pennsylvania). For several years he served as the principal of a Jewish day school in Wilmington, Delaware, and had also directed Jewish schools in Birmingham and in Camden, New Jersey, before moving to New York. His only known relative was a sister who lived in Tel Aviv. 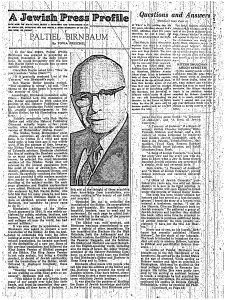 A profile of Philip Birnbaum by Tovia Preschel ran in the Jewish Press on Friday, February 24, 1967. Courtesy of David Olivestone

As part of his educational endeavors, he set about selecting passages from Maimonides’ Mishneh Torahand carefully vocalizing and punctuating the Hebrew text. With his explanatory notes in English on each page, it offered students an introductory glimpse into Maimonides’ vast compendium of Jewish law. Birnbaum submitted his manuscript to the Hebrew Publishing Company, which published it in 1944.

When the abridged Mishneh Torah met with success, HPC President Isidor Werbel suggested to Birnbaum that he translate the daily prayer book. Werbel’s motive was purely commercial. The prayer book business was very competitive, and Werbel saw an opportunity to get ahead of the pack. Many of the existing translations, such as those by Philips, Singer and others, were replete with archaic language such as “Blessed be He who speaketh and doeth: blessed be He who decreeth and performeth.” Most shul goers in those days had a minimal Jewish education, but this “Bible English” was probably almost as incomprehensible to them as the Hebrew itself.

For Birnbaum, it was also an opportunity to combat those elements in the Conservative and Reform movements which he saw as distorting traditional Judaism. In his introduction to the new Siddur, he railed against those who “. . . take liberties with the original, eliminating a phrase here and adding one there, each according to his own beliefs.”

Werbel queried Birnbaum as to why the dozens of editions of the siddur that HPC published were awash with so many different fonts and type sizes, even on the same page. “Why can’t the text of the siddur all be in one size,” he asked, “like any other book?” Birnbaum embraced the idea, and wrote about it in his introduction. “For no sound reason the pages of the siddur are broken up by several type sizes which have a confusing effect on the eyes of the reader. Those who learn the contents of the prayers soon discover that the emphasis suggested by the larger type is in most cases no emphasis at all.” And in a pedagogical insight which certainly rings true, he added, “Children, trained in reading the larger type in the siddur, gradually develop a prejudice against whatever appears in the smaller print.”

What is perhaps even more remarkable is that a 19-year-old Polish immigrant attained such a high level of fluency in a language which was not his mother tongue, and produced felicitous, articulate, eloquent and sometimes even poetic translations of complex texts.

Other innovations included his use of modern punctuation marks to indicate the breakup of sentences and clauses in the Hebrew text. He also made a point of including all the necessary component prayers within the pages of each service, “so that the worshipper is not called upon to search from page to page and to commute from reference to reference.” At the foot of each page, Birnbaum added source references, halachic information, historical insights and a brief commentary. Heaping criticism on other editions of the siddur, he gave many examples of poorly worded instructions that misled instead of leading. “What do [they] all mean?” he asked, and answered, “In one word: confusion.”

Dr. Avi Shmidman, liturgy scholar and member of the Academy of the Hebrew Language who lectures in the Hebrew Literature Department at Bar-Ilan University, grew up in Teaneck, New Jersey using the Birnbaum Siddur. “Birnbaum set the standard,” he says. “His impact was huge because of his insistence on precision in nikud [punctuation] and nusach [accuracy of the text]. The care that he gave to linguistic precision really affected the way entire generations davened.”

Based on careful research, Birnbaum corrected obvious, and not-so-obvious, errors in the Hebrew text of earlier siddurim, whether grammatical mistakes or misplaced words. When challenged, he was always able to back up his emendations with authoritative rabbinic sources. Ad for the new Birnbaum Siddur that appeared in April 1949 in the OU’s Jewish Life magazine, the forerunner of Jewish Action.

All this made the new siddur very usable. But its crowning achievement was the translation. In order to preserve the sense of reverence that he felt the prayer book demanded, Birnbaum retained the use of “Thee” and “Thou” when referring to God. “The diction has not been allowed to reach the level of everyday English,” he wrote, “in view of the exalted literary tone of the siddur.” But in stark contrast to the archaic style of previous translations, his version was intelligible and readable. According to Birnbaum, “The fault of some translations is their literalness. . . . Words should be translated according to their context.” Birnbaum’s genius was in choosing the most germane word, the most apposite turn of phrase.

Chazzanim welcomed the Birnbaum Siddur. “Whenever I was leading the davening in a congregation that was using the Birnbaum Siddur,” says Cantor Bernard Beer, director emeritus of Yeshiva University’s Belz School of Jewish Music. “I felt it helped those around me focus on what they were saying. The text was clear and easy to read, the translation was lucid and intelligent, and there was no need to turn pages back and forth.”

After the Siddur was published in 1949, it was followed by equally popular Birnbaum editions of the machzor for the High Holidays and the other festivals. His talent for translation and popularization soon led him to explore texts beyond the liturgy. In A Treasury of Judaism he set out “to acquaint the average reader with the ethical teachings of some seventy Jewish classics covering a period of thirty centuries.” Demonstrating an encyclopedic knowledge of rabbinic literature, he abridged and translated selections from the Tanach (later published in a separate volume as The Concise Jewish Bible), the Talmud, Midrash, Zohar and the medieval Jewish philosophers. He even translated the writings of some contemporary rabbinic figures.

A Book of Jewish Concepts was another acclaimed and popular work which differed from his previous books in that it was not a translation but Birnbaum’s own exposition of hundreds of essential Jewish ideas and practices, in dictionary form. He also published a Hebrew language textbook, Fluent Hebrew; a popular Haggadah; a Chumash; and the all-Hebrew Siddur Am Yisrael.

HPC continued to publish these and similar liturgical and reference works by Birnbaum in multiple editions for several decades. But tastes and styles change, and just as the Birnbaum Siddur replaced the editions that came before it, so, inevitably, did the siddurim of a new generation edge the Birnbaum off the synagogue shelves.

“The siddur,” wrote Birnbaum, “has never been sufficiently appreciated as a vehicle of Jewish knowledge.” The same might perhaps be said of Dr. Birnbaum himself.

David Olivestone edited and translatedThe NCSY Bencherand is the translator of the forthcoming Passover Haggadah Graphic Novel. A member of the Jewish Action Editorial Committee, he lives in Jerusalem.

4.3 3 votes
Article Rating
This article was featured in the Winter 2018 issue of Jewish Action.