My grandfather was famous. At some point in my life, I figured that out. Rabbi Ahron Soloveichik was the youngest son of Rabbi Moshe Soloveichik, an esteemed rabbi in a long dynasty of Jewish scholars. But I never saw him that way.

As a child wiling away my summers at my grandparents’ home on Ardmore Avenue in Chicago, our family lineage barely made an impact on my consciousness. There were signs I probably should have picked up on. For starters, there were always important-looking people who wanted to talk to my grandfather, and there was always a crowd filling my grandparents’ dining room on Shabbos mornings. But I was neither old enough nor interested enough to grasp the significance of these events; there were more important matters to concern myself with—calling dibs on the oversized recliner in my grandparents’ bedroom, the mysterious artifacts discovered in their basement, my grandmother’s freshly stocked pantry, et cetera. At age nine, some things were simply lost on me.

Other things were very much not lost on me. And those are the things that define my grandfather in my memory. To this day, ten years after his death, I see him through the naïve eyes of my childhood—not as the great Torah scholar heralded in rabbinic speeches, not as the politically active rabbi who fought for civil rights, but as a physically fragile man who personified strength, perseverance and love.

My most salient memory of my grandfather is utterly mundane: I remember him walking up and down the stairway in his home. If this sounds strange, you have to imagine the grand U-shaped staircase leading from the ground floor to my grandparents’ master bedroom. What made for a beautiful architectural design was a very long walk for a man crippled by a stroke and dependent on a cane. 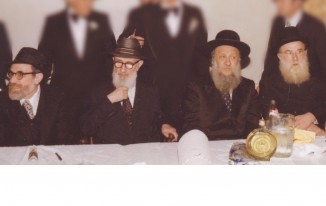 Every morning my grandfather walked down from his bedroom to the dining room where he ate, learned, wrote, and met with visitors. Every evening he made his way back up. Each step was accompanied by an intense cry of pain and a shudder that wracked his frail body. One of my younger siblings was so frightened by this image that he used to cover his eyes as my grandfather walked past. As a child, it never occurred to me that my grandfather had another choice, and maybe that’s because in his mind, he didn’t. Life had dealt him an excellent reason to give up, but he never accepted it. He never stopped teaching, never stopped giving, never stopped climbing those steps.

His reservoir of strength, even in the most difficult moments, was a testimony to his commitment and his love. He traveled to New York every week to teach at Yeshiva University, not because he sought recognition, but because he simply loved teaching Torah. His hundreds of students around the world can attest to that fact better than I can, but I saw the other side of the story. I watched him fly out every Tuesday morning and fly home every Thursday night.

My grandfather’s strength was matched only by his love—for his family, for teaching, for life itself. These two parts of him were two sides of the same coin. We often imagine intellectual giants as stoic, unemotional figures. We view them from a distance—we admire them, but we cannot relate to them. My grandfather was nothing like that.

In my mind, it is not a coincidence that my grandparents died four months apart—my grandmother in early July and my grandfather in early October. For a part of those four months, my grandfather lived in my parents’ home. My memory of him during that time clashed violently with my earliest and most salient memories of him. The determined, unstoppable grandfather of my youth seemed utterly defeated. He still had his sefarim and his students, but when his greatest love disappeared from his life, his reason to exist seemed to fade as well.

My grandparents were married for over fifty years. They were a team in every way—both teachers, both givers, both devoted to each other. Together, they raised six children, bestowed unconditional love (and chocolate) on their many grandchildren, and opened their home to hundreds of students.

My grandfather was certainly a brilliant scholar and a renowned teacher, but I knew him differently. I knew him as a man with a seemingly bottomless capacity for strength, a man who refused to give up, a man who was great because he was determined to make the most of the life he was given.

Nachama Soloveichik is the granddaughter of Rabbi Ahron Soloveichik. She lives in Washington DC.

5 1 vote
Article Rating
This article was featured in the Winter 2011 issue of Jewish Action.