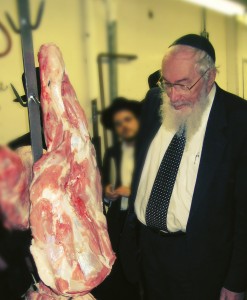 The Torah warns that those who adjudicate the law “may not tremble before any man,” “lo ta’guru mi’pnei ish” (Devarim 1:17). The Torah demands that judges have courage. Rabbi Belsky was someone who fought for the truth; he never gave a thought to how popular his position would be, or what others would say. Below is but a sample of the breadth and scope of Rabbi Belsky’s wide-ranging rulings and how they affect every kosher consumer:

1. Rabbi Belsky dispelled the myth that glycerin, one of the prominent ingredients in liquid medicines, is a foul-tasting chemical that does not need to be kosher.

2. He protested the use of meaningless contracts that are written as artifices devised solely to circumvent halachah.

3. He made the public aware that lipstick, toothpaste and mouthwash should have kosher certification, or at the very least, one should check that they do not contain any animal byproducts.

4. He spoke out against the institution of “mezonot” rolls and pita breads.

5. Rabbi Belsky was equally outspoken when reasoning dictated that it was appropriate to be lenient. In just the past few years, Rabbi Belsky wrote many teshuvot (responsa) defending the consumption of some of the most basic staples.

6. A question arose regarding the status of cow milk. Some dairy cows are affected by a condition called displaced abomasum. One treatment option for this illness involves puncturing the animal’s stomach to relieve the pressure. The question arose as to whether this procedure would render a cow a treifa (unfit for slaughter), causing its milk to be forbidden as well. Rabbi Belsky reasoned that since only a small proportion of cows develop this condition, and an unknown percentage of those cows undergo this procedure, one can assume that each cow retains its original status until informed otherwise; hence, he ruled, cow’s milk is permitted. Rabbi Belsky further questioned whether this procedure even renders the cow a treifa.

7. Rabbi Belsky permitted drinking New York City water, even though it contains copepods. He argued that since Jews have been drinking this water for over one hundred years, and no one ever noticed them, they must not be considered nirah l’einayim (visible to the the naked eye). Furthermore, since the copepods only live in the reservoirs, which have the status of mei borot (gathered water), the copepods are actually permissible to be eaten. [Note: In deference to the opinion of other posekim, the OU requires filtration of New York City water.]

9. Rabbi Belsky permitted the consumption of tropical oils that are transported overseas in heated parcel tankers. Although the ships carry many loads, and the possibility exists that non-kosher and kosher products may be heated simultaneously on the ships with the same steam, investigation of the trade routes has shown that the likelihood of this happening is remote. Furthermore, these non-kosher shipments would impart a ta’am lif’gam (no beneficial taste) to the kosher oils, and therefore any transfer of taste would be batul, nullified.

4 3 votes
Article Rating
This article was featured in the Summer 2016 issue of Jewish Action.