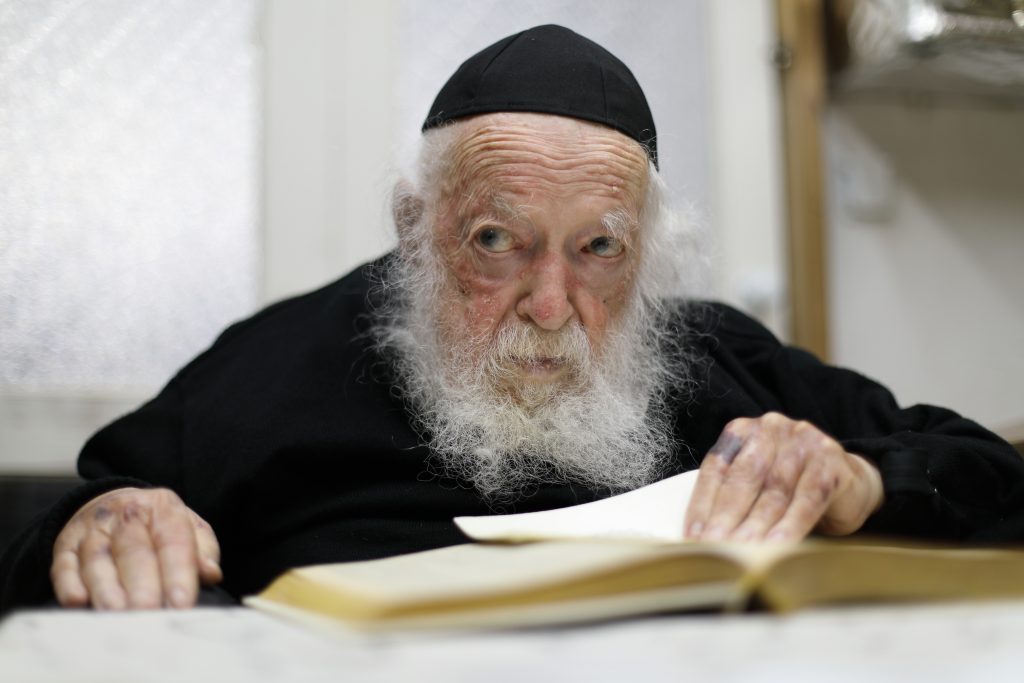 An attempt at understanding the world of Rav Chaim Kanievsky, zt”l

Rav Chaim Kanievsky, zt”l, was unique even as gedolim go, and that makes writing an appreciation of his life extremely challenging. The personage that was Rav Chaim simply does not translate into a language the vast majority of us can comprehend.

The stories about Rav Chaim—which are the mainstay of any biographical treatise—tend to fall into four broad categories: his incredible diligence, his utter unworldliness, his extraordinary knowledge (even “encyclopedic” doesn’t do it justice), and reams of miracles. I doubt that relating more of these miracle stories here will help us understand who Rav Chaim was. But our obligation to eulogize him, precisely because of his sheer greatness, imposes on us a duty we cannot shirk.

Let us first state the simple facts of his life. He was born in 1928 in Pinsk to his father Hagaon Harav Yaakov Yisrael Kanievsky, known simply as the Steipler, and his mother Rebbetzin Miriam, a sister of the famed Chazon Ish, zt”l. The Kanievsky family immigrated to Eretz Yisrael in 1934, in the wake of the Chazon Ish settling there. World-renowned as a Torah scholar and tzaddik, the Steipler raised his only son to be completely immersed in Torah study. The Chazon Ish, being childless himself, invested energy into his nephews, with extra dedication to young Chaim, who was extraordinarily diligent and focused, with no other interests but to study more and more. Indeed, by the age of seventeen, he had finished Shas.

At some point, Rav Chaim began a rigorous yearly study program that included finishing all of Talmud Bavli, Talmud Yerushalmi, Rambam, Shulchan Aruch, Tosefta, Zohar and major midrashim! Every year on Pesach, he would make a siyum on all of Torah. In a leap year, he would complete his schedule on Purim. He would then use the extra month to write a sefer. His sefarim included the laws of zeraim, organized around the Rambam; a peirush on Yerushalmi; and dozens of other works. His mastery of all of Torah and his love of clarity and simplicity are strikingly evident in all his sefarim.

As incredible and breathtaking as was his proficiency in Torah, so was his total lack of interest in anything else. Even simple street names were alien to him. It seemed as if he could shut off his memory and mind at will. He had at his fingertips the complex calculations of the Rambam regarding kiddush hachodesh or kinim, yet he would struggle with simple mathematical problems. When Rabbi Aharon Feldman was introduced to him as the rosh yeshivah of Ner Yisroel, it drew a blank stare, as did the added reference to the city of Baltimore. But when told that Rav Aharon had authored a certain Torah work, Rav Chaim immediately stated where that sefer was situated in his bookcase and that he appreciated certain points presented in that sefer. Similarly, if Rav Chaim felt he owed someone an apology or explanation, he would remember it for years, but as soon as the need was gone, he completely forgot the name of the person.

Rav Chaim married Rebbetzin Batsheva, daughter of Harav Yosef Shalom Elyashiv, zt”l, and spent his life studying. He never taught in any yeshivah or other framework, and he never spoke publicly. He was not active in politics or in any leadership role; he merely responded to questions as they were brought before him. And even that only at the behest of Harav Elazar Shach, zt”l, who persuaded him that he must be available to respond to questions. Even then, it was almost always a laconic yes or no.

5782 was a leap year. As always, Rav Chaim finished kol haTorah kulah, all of Torah. As he reached out to pen his next work, his quill went silent, and on the fifteenth of Adar, the legendary Rav Chaim passed away.

How do we understand who Rav Chaim was? And what meaning does it have for us?

Let us start with a provocative question. The Mishnah states (Sanhedrin) that an apikores has no share in the World to Come. While in our vernacular apikores is defined as a heretic or non-believer, the Gemara gives it a different meaning, defining it as one who does not appreciate chachamim, one who says, “What’s the use of the chachamim if their study is only for themselves?” In another version of the gemara, an apikores is someone who states, “What’s the point of the wisdom of chachamim who have neither added nor removed any prohibitions?”

These remarks are certainly disrespectful. But are they on par with an apikores who denies the World to Come and who therefore has no share in it?

Let us take a closer look at the point being made. If a person wears tzitzis or tefillin, isn’t the performance of the mitzvah for his own benefit? Why not level criticism at all pious people? Why are the apikorsim specifically targeting talmud Torah and talmidei chachamim? To answer this question, we need to examine our core understanding of Yiddishkeit itself, more specifically our conception of the relationship between Torah and mitzvos. We instinctively reach for the idea that the world was created in order for man to accomplish important things and that Torah is the instruction manual; it teaches us right from wrong and exhorts us to choose accordingly. With that perspective, action is all-important, with study simply being a necessary means to an end.

But there is a far deeper understanding of the relationship between the two. The Bach, a famous seventeenth-century halachic authority, portrays it in the reverse. He references a Yerushalmi that states that the Second Temple was destroyed because the people were not reciting a blessing prior to Torah study, and he explains this puzzling gemara as a metaphor depicting their attitude toward Torah study. They viewed Torah as an instruction manual, a means toward performing mitzvos correctly. Just as one does not say a blessing when he saws wood for a sukkah, for it is but a preparation to the actual performance of the mitzvah, so too, they thought, one does not recite a blessing upon the study of Torah for it is but a preparatory phase in the performance of mitzvos.

But this is terribly wrong, explains the Bach. Torah is there to imbue our hearts and souls with the spirituality and sanctity that connects us to the Source of Torah, the Creator Himself. The mitzvos are actually a means to begin to comprehend the Torah. And this understanding is the ultimate refinement of one’s self and one’s connection to Hashem.

To help us comprehend the difference between these two approaches, let us use the following analogy:

Two scientists are designing a new gadget. The first, an inventor, ponders all of the physics and engineering concepts he has studied and builds upon those laws to come up with a greatly improved product. The second man is a professor attempting to explain some abstruse laws of nature. He produces a contraption that exhibits these laws. Both devices make use of the selfsame laws of nature. In the case of the first scientist, however, the device is the end goal and science is merely the means, whereas for the second one, the ultimate purpose is science and the device is the means.

This insight into the role of Torah gives us a newfound understanding of the spiritual structure our lives are supposed to embrace. The World to Come is a spiritual world that we construct through the enlightenment we receive from Torah. Torah is not merely the means to the mitzvos; rather, the mitzvos are the means to Torah.

We can now understand why the apikores’s derogatory question reveals not just simple disrespect for the chacham himself but a complete negation of one’s spiritual self, a total lack of regard for Torah, seeing it as but a maidservant for the world of mitzvos.

Rav Chaim was the embodiment of a Torah personage. The world he lived in was the World of Truth, a world where the only reality that exists is the Torah reality. We are different. Very different. We struggle to define the value of a person who may be great in Torah but does not teach, speak or proactively lead or initiate. And it is only natural that we struggle with it. We are creatures of this world, and we have but the dimmest of understandings that there is a world diametrically opposed to ours. And it is that world that is the “real” world.

Rav Chaim’s incredible knowledge was a product of his living in the world of Torah. It wasn’t only the volume of facts he knew, but the extraordinary type of facts he noticed in the Torah. Things no one else had noticed before. When asked a question, he would sometimes reference a source that would make your jaw drop in astonishment. It wasn’t necessarily because we didn’t know the source; rather, it was because we had never taken note of that detail.

How do we understand such other-worldly Torah knowledge? Imagine you are considering buying a home in a particular neighborhood. You would appropriately acquaint yourself with every important and relevant detail, such as the average income of the inhabitants, education options, et cetera. Yet if someone would ask you how many park benches are in that neighborhood, you would be stumped. By contrast, the answer to this question and innumerable similar questions would be at the fingertips of the residents of that neighborhood. Not because they memorized it, but because they live in it. Day in and day out. This was the essence of Rav Chaim’s bekius.

This, too, is the best way to describe his incredible hasmadah. His Torah study was not akin to a subject that one pursues. It wasn’t a strain, or even a challenging endeavor, noble as that might be. It was simply his existence. We do not ask people why they eat, drink, stroll, laugh or perform any one of the other myriad activities called living. They do these things because that is what their lives are about. Rav Chaim’s life was chaim shel Torah.

Yes, we cannot comprehend it because we live in an illusory world. But at least we were fortunate to have witnessed a person who, even while cloaked in flesh and blood, was already living in the world of emes.

Rabbi Aaron Lopiansky is rosh yeshivah of the Yeshiva of Greater Washington in Silver Spring, Maryland.