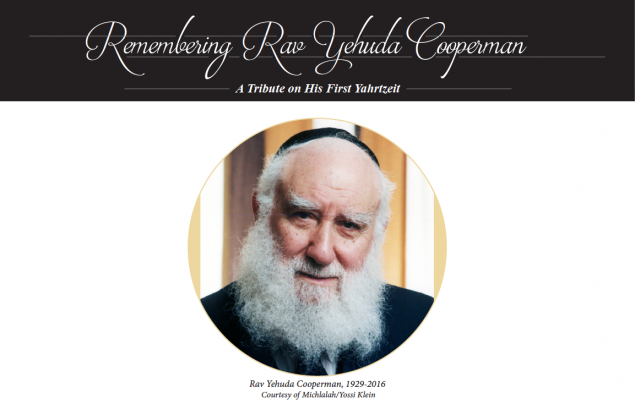 Thank God, the Jewish people are blessed with rabbis, talmidei chachamim, tzaddikim and many, many wonderful people—but there was no one like Rav Yehuda Cooperman, zt”l. He was unique.

I was privileged to have had a very close relationship with Rav Cooperman. There was a special bond between him and my father, Rabbi Isaac Bernstein, zt”l, who was his first cousin, and so I had a natural niche waiting for me when I came to study in Israel. Soon afterwards we began a chavrusa that lasted more than twenty-five years. During that time, I was able to absorb much of Rav Cooperman’s approach and methodology in Torah learning, and benefit from his wisdom and advice regarding all manner of things. I was also able to benefit simply from being in his company, seeing the twinkle in his eye as he discussed his views on life, education and the Land of Israel. His unique perception and vast experience gave him a fascinating perspective on so many topics and, as is the case with great men, it was often impossible to predict what he might say on any given matter.

Rav Cooperman was both extremely gracious and generous. He was entirely removed from any form of small-mindedness or contention. He once related to me the following: “During the early years of Michlalah [Jerusalem College for Women], a certain rabbi opened a school in Israel which you could say was in direct competition with Michlalah. I did not believe his approach was altogether correct, but it was certainly legitimate, and I called him in to meet with me in Michlalah. After discussing a few general matters, I said to him, ‘Setting up a school in Israel involves a lot of bureaucracy and can often be confounding and frustrating. Michlalah has already been through all of that. Next door is the records room; please feel free to photocopy any documents you feel you might need so that it won’t be so confusing for you.’”

He never sought honor, and when he evaded it, he did so simply and without fanfare, naturally deflecting the honor onto others. At all the family simchas I was together with him, I saw that his instinctive reaction to being offered any given honor was to think of anyone else for whom it might be more appropriate.

He was a rare combination of greatness and humility, as was evident during one of our family visits to his house. At some point, one of my children spilled something on the kitchen floor, making a terrible mess. I was slightly horrified, as the Cooperman house was always impeccably clean. Rav Cooperman noticed the mess, and without so much as batting an eyelid, went over to the bathroom, came back with a bucket of water and a sponga cloth, and proceeded to clean it up. When he finished, he carried on the conversation we had been having at exactly the point we had left off, as if nothing out of the ordinary had happened at all. This took place when he was in his mid-seventies. 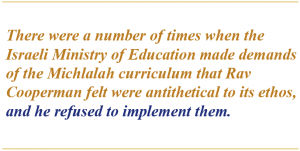 Although Rav Cooperman lived with a certain simplicity, he was not a simple person. For within his unassuming nature, one could perceive a singularity of purpose and a nobility of spirit that lent a special quality to even his mundane activities. This is part of the reason he left such a deep impression on those who met him, however brief the meeting may have been.

Rav Cooperman was a big believer in the effective use of language or turn of phrase, and had many trademark sayings and aphorisms that he used to communicate key ideas. With his discerning musical ear, he intuited the lasting impact these sayings could have. (Former Michlalah students may recall him urging them to ensure that their days were permeated by Torah, not punctuated by it, or chiding them, once they had received their bachelor’s degrees, to find their Mister before going after their master’s).

A classic example from the Rav Cooperman lexicon is the idea of the musag (concept) versus the mosad (institution). Every institution is built in order to serve a concept or value, and thus the institution can never be allowed to become the value in itself, for at that point it risks no longer being true to what it was built for. This was an idea that Rav Cooperman himself lived by faithfully. There were a number of times when the Israeli Ministry of Education made demands of the Michlalah curriculum that Rav Cooperman felt were antithetical to its ethos, and he refused to implement them. In one instance, a certain official threatened to withhold crucial government funding that would have made it practically impossible for Michlalah to continue. In response to this threat, Rav Cooperman replied, “This demand is unacceptable to me, and if as a result of refusing to implement it, Michlalah is forced to close, then so be it. Michlalah exists to serve a Torah-true vision of education. It is not a value in itself that has to be maintained at all costs. Should it ever cease to be able to serve its function faithfully, I will close it there and then.” Seeing that Rav Cooperman could not be swayed by any threat to his mosad at the expense of the musag, the official relented.

This clarity of vision and purpose was summed up beautifully on one occasion when Rav Cooperman was showing a visitor around Michlalah’s impressive campus. When the tour was over, the guest commented, “Rav Cooperman, you must be very proud of the buildings you built here.” To which Rav Cooperman replied, “No, I am proud of the homes I built here!”

Rav Cooperman’s openness to learning new Torah insights continued well into his eighties and literally up until his final few weeks. He kept a small table next to his desk that was full of new sefarim that he was working his way through. Having mastered so much of the classic Torah commentaries, and having practically “written the book” on how to learn Chumash, it would have been so easy for him to look askance at ideas from younger people who, compared to him, were mere beginners with barely a fraction of his knowledge. On many occasions I came to him with approaches to questions that I knew he had already dealt with and written about, and it was simply amazing to watch how he would listen with full attention and an open mind, endorsing that which he felt had merit, critiquing that which he thought was lacking in substance, and invariably following up with recommendations for further sources relating to that topic. 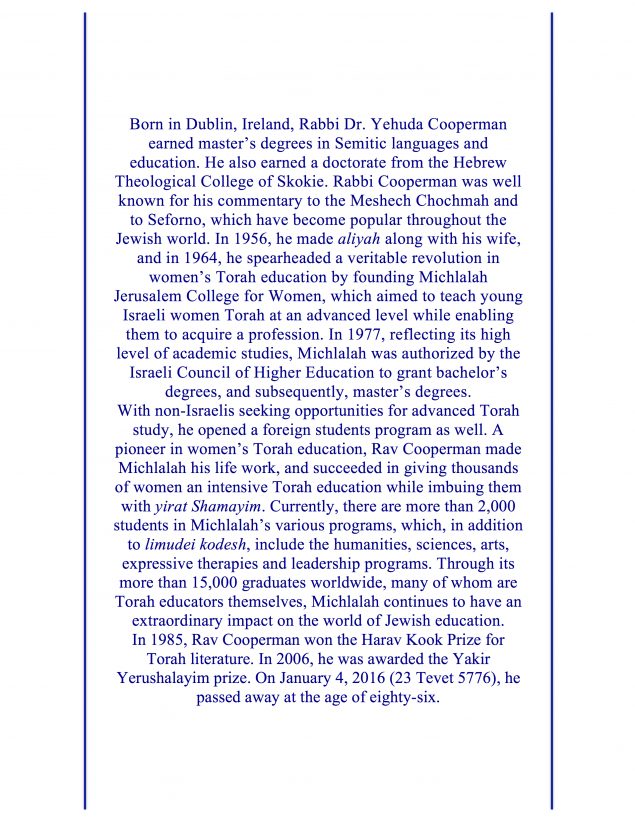 Rav Cooperman was respected by all. I believe the reason for this is twofold. First, he was a man of absolute integrity, a quality that could not fail to earn him the respect of anyone who encountered him. Second, he himself respected all others, both religious and non-religious, whether he agreed with their worldview or totally opposed it. Ideological differences were never allowed to deny a person the respect that he felt was due to him as a person. He paid personal attention to everyone he met, whether she was a teacher, student or a worker on the campus.

Of the thousands of girls who passed through Michlalah over the years, most—if not all—can remember an encounter, however brief, with Rav Cooperman and felt that for that moment he had something to say to them specifically. This is a testament to the value he placed on every individual.

It is probably impossible to quantify the number of people that he affected, whether it was the thousands of girls he taught personally, the many thousands more taught by the teachers he trained, the Torah learners for whom the words of the Meshech Chochmah and Seforno became accessible, the devotees of Chumash study whose eyes he opened with his methodology of “peshuto shel Mikra,” and countless others who simply heard a shiur from him some place where he was visiting, and thus caught a glimpse of this consummate and unique Torah educator.

In truth, sometimes when I was with him and began to consider all of his accomplishments, I felt as if I was sitting in front of an entire team of people, until I blinked again and it was just Rav Cooperman sitting across the table, with his disarming smile and easygoing manner.

Being very musical, Rav Cooperman made music an integral part of the Cooperman household. He would often quote the Vilna Gaon as saying that understanding music could lead one to a deeper understanding of Torah. In this regard, he would encourage his students to develop what he termed “a musical appreciation of Torah,” identifying emotionally and experientially as well as intellectually with the discussion of the topic at hand. And he led by example. The delight and excitement with which he would teach Torah were both palpable and contagious, and to him this was an inseparable part of the Torah learning experience.

In keeping with this musical approach, he was wont to refer to Torah as “a symphony,” weaving together as he did the disciplines of Torah commentary, halachah and Jewish thought. Upon reflection, it seems to me that Rav Cooperman himself was a symphony, blending together so many facets into a harmonized whole. For those who never met him, they may yet catch some strains of his enchanting melody as they study his works or learn from his students. For those who were privileged to be exposed to the symphony firsthand, it is an experience that will continue to resonate and reverberate with them, guiding and inspiring them for years to come ad bias goel tzedek (until the arrival of Mashiach).

Born and raised in London, Rabbi Immanuel Bernstein studied at Yeshivas Ateres Yisrael in Bayit Vegan and received semichah from Rabbi Chaim Walkin. He currently teaches at Yeshivas Machon Yaakov and various seminaries, including Michlalah. He has written numerous sefarim in English and Hebrew, and lives in Jerusalem with his wife and six children.