Counter-clockwise from top left: Caryn meets then New York Senator Hillary Clinton at the OU headquarters in Manhattan, circa 2005. | Yachad delegation at the Israel Day Parade, circa 1995. Caryn is in the center, holding up the Yachad banner. Courtesy of Leora Verbit | Caryn with a fellow guest at the Yachad National Dinner in 2006. | Caryn and her family at the Yachad Dinner in 2006, where her brother Avi and his wife, Shulamis, were honored. From left: Avi, Shulamis, Caryn, and parents Chaya and Lester Pollak.

Caryn Esther Pollak was born at a time the world believed that children with Down syndrome could never learn to read or write or live full, productive lives.

Her parents weren’t buying it.

From day one, they encouraged Caryn to reach as high as her determination would take her, constantly seeking ways to cultivate her strengths and abilities. When she reached school age, the Pollaks moved from the Bronx section of New York to West Hempstead on Long Island so that Caryn could actualize her potential by attending the Nassau County public schools. Caryn not only learned to read and write, she learned to pray in Hebrew and play the piano. Unfortunately, she lacked a Jewish social life and a way to learn about and grow in Judaism.

All that changed the day her parents met Chana Zweiter who was running a program for individuals with special needs for the New York Board of Jewish Education. At the time, Zweiter was busy pursuing a new concept called “inclusion.” Her goal was to give those with developmental disabilities entry to the full spectrum of Jewish life—participating right alongside their mainstream peers.

In the early 1980s, Zweiter approached the OU with a revolutionary idea: NCSY was expanding throughout North America, instilling a passion for Judaism in both unaffiliated and yeshivah-educated teens. Why not do the same for Jewish youth with developmental disabilities? The OU agreed.

In January 1984, a pilot program was launched through a joint effort of NCSY and the Young Israel of West Hempstead’s Youth Department; Yachad held its first Shabbaton in the shul. The Pollaks were delighted; they happened to be members of the shul and Caryn happily attended the Shabbaton. The event was a hit and led to the creation of Yachad/National Jewish Council for Disabilities, the first Jewish youth group for teens with special needs. Caryn was hooked.

As Yachad flourished, providing more and more programs, Caryn participated in virtually every Yachad Shabbaton, trip and summer camp that followed, making lifelong friendships with Yachad participants as well as advisors. Over time, she became Yachad’s spokesperson, accompanying Yachad staff members as they traveled to promote the program in shuls and Jewish day schools throughout the county.

“Yachad allowed her and others like her to contribute to the community in a public way, something that never existed for them before,” says Caryn’s younger brother, Avi, a resident of Beit Shemesh, Israel. “Just being able to be present and participate in different shuls, to be given the opportunity for social contact . . . Yachad deeply affected Caryn’s Judaism. It was her lifeline.”

The Shabbatonim gave Caryn the chance to celebrate her love for Jews and Judaism, and she wasn’t shy about sharing it. At each Shabbaton, she stood before the crowd in shul, and with the confidence of a veteran speaker, delivered a devar Torah. Rabbis and communities throughout the States knew and loved her.

“She became our yichus,” says her aunt Joy Lieber of Far Rockaway, New York. “We were always ‘Caryn’s aunt’ or ‘Caryn’s brother’ or ‘Caryn’s cousin.’”

“Seeing a young woman with Down syndrome with such poise and obvious love and excitement for Torah sends a powerful message that ‘I may look a little different and seem a little different, but I am just like you,’” says Elana Goldscheider, a former assistant director of Yachad.

Caryn took her Judaism very seriously and worked hard on keeping the mitzvot.

“She was so careful not to speak lashon hara, and to daven with kavanah; and she was constantly thanking Hashem for what she had,” says Blima Druker, another former assistant director of Yachad. “She never took anything for granted.” 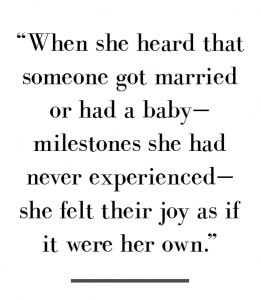 “When [a newcomer] appeared at a Shabbaton, she was the first to jump up and introduce herself,” says Leora Verbit, coordinator for Yachad’s New Jersey program, who first met Caryn at a Shabbaton when she was a high school advisor for Yachad. “If she noticed anyone who wasn’t participating, she would pull them into the circle.” In 2010, Caryn was among those honored by the OU at its national dinner for being a Yachad trailblazer and for playing an instrumental role in Yachad’s phenomenal growth and development.

Once Caryn finished school, Zweiter, who served as Yachad’s founding director before she made aliyah, urged the OU to take inclusion to another level by hiring Caryn to work in the Yachad office. Caryn was more than up for the challenge.

Caryn’s mother took her by train to downtown Manhattan for several weeks until she felt that her daughter was ready to make the commute on her own. Today, individuals with disabilities are a growing presence in the workplace, stocking shelves and bagging groceries in supermarkets among other jobs. Back in the mid-1980s, Caryn was an anomaly.

Caryn became an integral part of the Yachad office and took enormous pride in her job. It was not just her office skills that made her work life such a success. Her greatest strength, says Dr. Jeffrey Lichtman, international director of Yachad, was her welcoming personality.

“Caryn was out there, front and center, engaging very positively with people. She reflected optimism in virtually everything she did,” says Dr. Lichtman.

“It was impossible for Caryn to pass you in the hall without engaging you in friendly conversation,” says Rabbi Menachem Genack, CEO, OU Kosher. “No matter how gloomy one felt, no matter what was happening in your life, her smile made you happy. It’s a lesson for all of us.”

Matters of the heart came easily to Caryn. If she noticed a Yachad member looking downcast, she sat down beside her, gave her a hug and took her hand. When she heard that someone got married or had a baby—milestones she had never experienced—she felt their joy as if it were her own.

“Caryn was the antithesis of jealousy,” says Avi. “She taught me not to compare the hand you’ve been dealt by God to anyone else’s, and that each person has to make the best of what they’ve been given. Even though her starting point was more challenged than others, she didn’t see them as challenges. This was just who she was and she was proud of who she was.”

Even during her final illness, her resolute spirit shone through. She passed away at the age of fifty-two; her pure neshamah returned to her Maker on the 22nd of Elul (September 25, 2016).

Sequestered in the headquarters office in Manhattan, Yachad staff could easily have lost sight of the people they were helping. “Caryn made sure we never forgot; simply because she was one of us,” says Dr. Lichtman. “She was a constant reminder of what is important. She was genuinely happy to have a job she liked, and the family, friends and community she loved. In the best ways possible, she represented all of this population’s potential talents and abilities. If there was a face to Yachad, Caryn was it.”

Bayla Sheva Brenner is an award-winning freelance writer and a regular contributor to Jewish Action. She can be reached at baylashevabrenner@outlook.com.