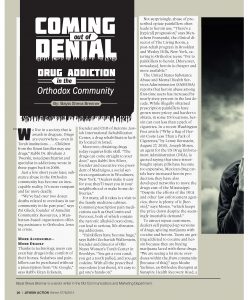 Jewish Action, the quarterly magazine of the Orthodox Union, won two Simon Rockower Awards for work produced in 2015. The magazine’s feature story “Coming Out of Denial: Drug Addiction in the Orthodox Community” won first place in two categories: Award for Excellence in Feature Writing and The Rambam Award for Excellence in Writing About Health Care. Written by Bayla Sheva Brenner, the article, which appeared in the Winter 2015 issue of Jewish Action, explored drug addiction in the Orthodox community as well as the road to rehabilitation. The well-researched article, which included information about drug rehabilitation centers in the US and Israel that are under Orthodox auspices, described how the Orthodox community is more aware of the drug plague.

The prestigious awards, referred to as the “Jewish Pulitzers,” are sponsored by the American Jewish Press Association, which holds a journalism competition for leading Jewish magazines and newspapers from across the country. The entries are judged by a panel of judges with expertise in journalism, writing/reporting, editing, graphic design and cartooning in both the Jewish and non-Jewish media. This is the fifth year in which Jewish Action has participated in the Rockower Awards competition, and it has been honored in each of the five years.

Allen I. Fagin, OU executive vice president, stated, “These awards attest to the quality in-depth journalism readers have come to expect from Jewish Action. With one of the largest circulations in Jewish media, Jewish Action continues to remain one of the most intelligent and influential publications in the Orthodox world.” 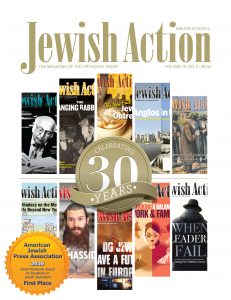 Gerald M. Schreck, chairman of the Jewish Action Committee, said, “At a time when many popular secular magazines are losing readership, it’s gratifying to know that Jewish Action is being recognized by professionals as a first-class media product. We are fortunate to have the writing skills of Bayla Sheva Brenner whose expertise is turning feature stories into journalistic works of art. I’m exceptionally proud of our talented editor, Nechama Carmel, her able assistant, Sara Olson, and our editorial board that consistently provides incisive input in planning and executing pace setting features that continue to motivate the Jewish community.

For more information about Jewish Action, to advertise or to subscribe, visit www.ou.org/jewish_action.