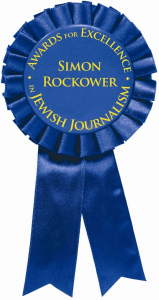 The magazine also won Second Place for excellence in writing about health care for “Dating with a Mental Disorder” by David H. Rosmarin.

The awards are for work in 2019. “It’s gratifying to be recognized nationally as an award-winning magazine whose authors and editorial staff are certainly of the highest caliber,” said Jewish Action Committee Chairman Gerald M. Schreck. “These well-deserved awards attest to the intelligent, quality journalism readers have come to expect from the publication.”

The prestigious Simon Rockower Awards, referred to as the “Jewish Pulitzers,” are sponsored by the AJPA, which holds a journalism competition for leading Jewish magazines and newspapers from across the country. The entries are judged by a panel of judges with expertise in journalism, writing/reporting, editing, graphic design and cartooning in both the Jewish and non-Jewish media.