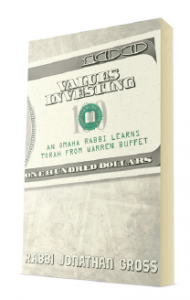 Finance, as an industry, has gained a reputation as a ruthless, amoral field where the only rule is to make money and the only law is to not get caught breaking the law. Every generalization like that has some truth to it, but paints with an exceedingly broad brush. One notable exception in finance is Warren Buffett, perhaps the most successful investor alive today. Buffett has become famous not only for his success but also for his wholesome investment and life advice. In interviews and his annual shareholder letter, Buffett offers old-fashioned, common-sense guidance.

For many years, Rabbi Jonathan Gross served as the Orthodox rabbi in Omaha, Nebraska, where Buffett lives. Their paths crossed when Rabbi Gross started a charity fundraiser that involved selling his chametz to Warren Buffett. Like many others, Rabbi Gross takes Buffett’s investment advice to heart as important life lessons. In this book, he summarizes these ideas and shows their correlations in Torah. In many ways, these lessons are obvious. But it is precisely these obvious moral lessons that we tend to forget as we get caught up in the complications of life.

Values Investing is a Mesillat Yesharim for the free-market era. Buffett and Rabbi Gross remind us of the importance of honesty, humility and treating every person with respect. This charming book can change your life without teaching you something you did not already know. Rather, it reinforces the important lessons we learned as children and forgot as we rushed into adulthood. The master investor, through his rabbi friend, teaches us to go back to the basics of morality and ethics. 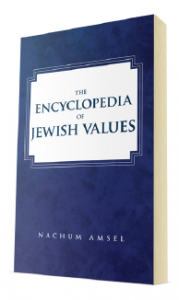 Rabbi Dr. Nachum Amsel writes in his introduction that the term “encyclopedia” in the title is “a bit presumptuous.” Even though this is the first of a projected four-volume series, the task of encompassing the entirety of Jewish thought in any encyclopedia seems impossible. The Torah is described as being “longer than the earth and broader than the sea.” Indeed, each of the volume’s thirty-nine essays lacks a systematic and unified style, perhaps because the topics are so expansive. Yet the essays contain so much material, rich in depth and breadth, full of insight and contemporary relevance, that we can forgive the title. This book might not be an encyclopedia but it is a gold mine of Jewish values. Masterfully combining Biblical, legal and philosophical texts, Rabbi Amsel, director of education at the Destiny Foundation, an educational media foundation, gives each topic extensive treatment. Each essay seems like a well-organized, multi-hour lecture on the topic (rabbis and teachers take note!).

Topics range from birthdays to gun control to homosexuality to jealousy to differences between man and animal. On the one hand, the connection among topics eludes the reader. On the other hand, the book’s organization seems almost irrelevant because each essay is a self-contained unit. Rabbi Amsel writes in clear English, intending this work for both the beginner and the expert. He provides not only sources but thoughtful connections, as he weaves a narrative from the broad spectrum of texts he cites. What does Judaism have to say about alternative medicine? Before approaching halachic texts, Rabbi Amsel asks a theological question: if all healing comes from God, why should it matter whether a medical treatment is conventional or alternative? From this issue, he proceeds seamlessly to the halachic aspects of the question, such as a nineteenth-century responsum forbidding a Jew from sending a telegram on Shabbat to a tzaddik asking him to pray for a sick person. Conventional medicine for a deathly ill patient overrides Shabbat, but not alternative methods like a tzaddik’s prayer.

Rabbi Amsel has a knack for finding interesting, relevant topics. This book is a vast resource of expert Jewish analysis on timely subjects.

Rabbi Dovid Cohen is too young to write his memoirs. His book We Are Almost There: Living With Patience,

Perseverance and Purpose uses reflections on his own life as a mirror to the challenges facing American Orthodox Jews today. He was a successful lawyer but, sadly, had trouble finding his match. Life as a single professional in New York comes with a unique set of doubts and fears. In a whirlwind story that features a pushy Israeli taxi driver, Rabbi Cohen finally finds his bashert. Then he and his wife have a special needs child, a challenge with its own joys and fears as they adjust their life to help their wonderful child succeed. Through his bachelorhood, marriage and fatherhood, along with a career change from law to the rabbinate, Rabbi Cohen, who currently serves as OU regional director of synagogues for Manhattan, Bronx, Westchester and Connecticut as well as director of community outreach for Yachad, offers a window into his emotions.

This is a very personal story, not just biographical but psychological and emotional—including the thoughts and feelings that accompany, and sometimes overwhelm, the author throughout his journey. Life is about relationships. When Rabbi Cohen is faced with a new challenge, such as speaking about a school shooting, he thinks about the emotions of his audience and relates to their concerns. As a rabbi in Manhattan, he perceives quite a bit of affluence and concern with status. But he also sees the kindness and charity, the honest desire to be good people. Rabbi Cohen’s messages throughout the book relate to the personal growth and experiences that we all encounter, and would do well to think about in more depth. 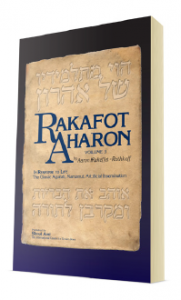 (Disclosure: My family contributed a modest dedication for the publication of this book in memory of my wife’s grandparents.)

Jewish law has never been successfully codified, despite the valiant attempts that still resonate centuries after their composition. While many laws are straightforward, many more defy simple characterization. The details of each situation are so complex and the multitude of competing concerns so numerous, that no standard formulation will suffice for any specific case. The greatest scholars often will disagree exactly how to combine the different texts and issues into a conclusion. That is the beauty of the living Torah, often obscured from popular sight in thick volumes of responsa.

For nearly forty years, Rabbi Dr. Aharon Rakeffet-Rothkoff has been teaching classes at Yeshiva University’s Gruss Kollel in Jerusalem on responsa literature. Rabbi Rakeffet’s lectures began circulating via cassette tapes in a different century and are now wildly popular on the Internet, gaining followers within and far outside his Yeshiva University orbit. A trained historian and a longtime teacher of advanced rabbinical students, Rabbi Rakeffet does not merely share the different views on a complex halachic topic. He paints a verbal picture, describing the personalities of the rabbis involved, the historical context of the questions and the sequence of precedent and further development. He teaches the history of halachah without historicism, focusing on the facts of the case and the underlying theoretical concepts of the decision rather than the social, economic and political pressures on which historians sometimes dwell. This is the evolution of halachah as traditionally understood, as great scholars reach groundbreaking conclusions and then later generations build on those decisions, all with an aim at reaching the Divine truth of Torah.

In this book, a student—Yaakov Weinstein—compiled series of lectures on three very difficult topics: the classic agunah, mamzerut (illegitimate children) and artificial insemination. With great clarity of language and thought, this book opens up the world of the halachic decisor. Readers gain access to the deliberations on life-altering legal decisions, the struggle to ascertain the facts and wrestle with ancient texts in order to reach a humane but intellectually honest conclusion. One can only leave this book with appreciation for the genius and sensitivity of the great halachists of the ages, and the great burden placed on their shoulders.